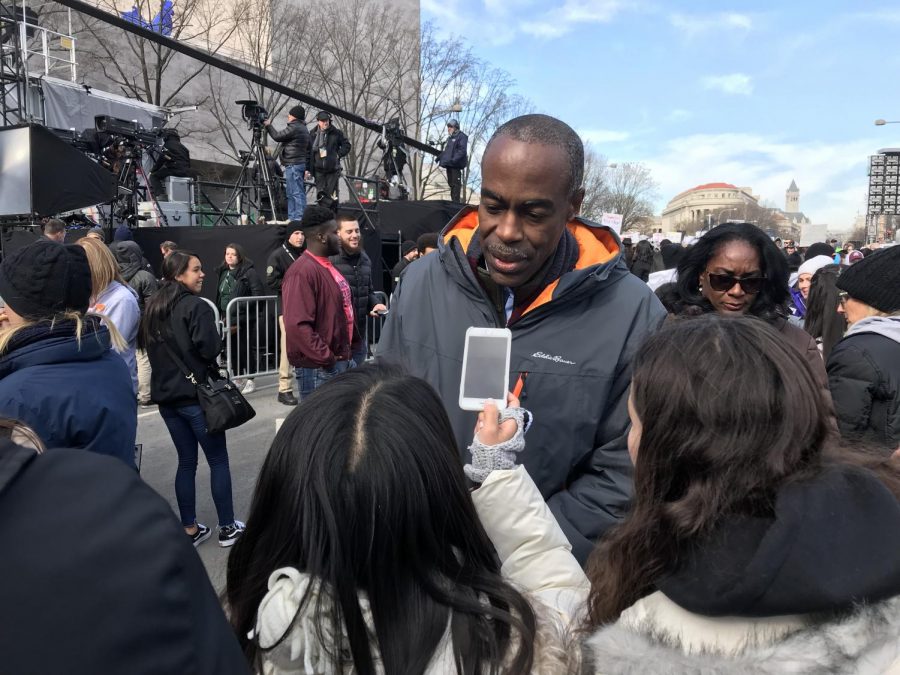 BCPS Superintendent Robert Runcie talks with Eagle Eye reporters at the March For Our Lives event in Washington, D.C., on March 24, 2018. Runcie attended the march along with numerous MSD students and celebrities after the Feb. 14, 2018 shooting at the school.

On the morning of Wednesday, April 21, Broward County Public Schools Superintendent Robert Runcie was arrested. He was booked at Broward County Jail in Fort Lauderdale, FL, and then released on bond at 10:40 a.m.

The only listed charge against Runcie is perjury in an official proceeding, which is a third-degree felony. He was arrested by the Florida Department of Law Enforcement.

Runcie has served as the BCPS Superintendent for ten years since he first joined BCPS in 2011. He has been recognized for his efforts within the district at both the state and national levels. However, following the deadly shooting at Marjory Stoneman Douglas High School on Feb. 14, 2018, his position has been in jeopardy.

After the shooting, several MSD administrators were removed from their offices, including former principal Ty Thompson. At the district level, students and parents alike called for reform of the school board and the removal of Superintendent Runcie.

The law offices of Michael Dutko and Jeremy Kroll, in addition to their associate Johnny McCray Jr., who are representing Runcie, released a statement in regards to his arrest and hopefully continuing role within BCPS.

“Mr. Runcie will enter a plea of not guilty to the charge,” Dutko, Kroll and McCray wrote in their release. “We are confident that he will be exonerated and he intends to continue to carry out his responsibilities with the highest level of integrity and moral standards […].

Runcie and his lawyers claim that they do not know why this charge has been brought against him.

“This morning, we received a copy of an indictment that does not shed any light on what false statement is alleged to have been made,” Dutko, Kroll and McCray wrote in their release.

Runcie was not the only BCPS official who was arrested.

The district chief lawyer for BCPS, General Counsel Barbra Myrick, was also charged with a third-degree felony, the unlawful disclosure of statewide official proceedings. She has worked for BCPS since 2002 and has held the office of General Counsel since 2016.

Myrick’s attorney, J. David Bogenschutz says that he has not seen her indictment document. Under the advice of her legal team, Myrick will either plead not guilty to the charges or remain silent until the court enters a plea.

Both Runcie and Myrick’s charges were brought against them after the closing of the grand jury panel in regards to the MSD Feb. 14, 2018 shooting.

Currently, the School Board of BCPS must make the decision if Myrick and Runcie will remain in their offices after being arrested. While that is being decided, Jeff Moquin, Runcie’s Chief of Staff, will be running operations for the remainder of the week.