Suspense builds up one week before the NFL Draft 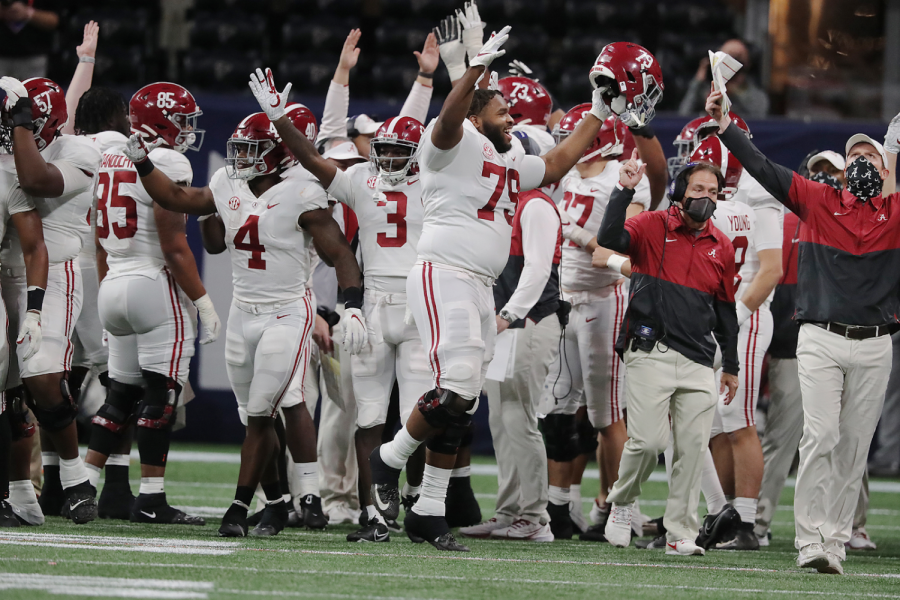 Alabama players and Nick Saban react after running back Najee Harris scored a touchdown to take a 42-31 lead over Florida during the fourth quarter in the SEC Championship on Saturday, Dec. 19, 2020, in Atlanta, Georgia. Photo courtesy of Curtis Compton/Atlanta Journal-Constitution/TNS

On Thursday, April 29, the first round of the 2021 NFL Draft will take place in Cleveland, Ohio. The second and third rounds will be held on Friday, April 30, with the remaining four rounds taking place on Saturday, May 1.

The NFL’s 32 teams will have ten minutes each to make their pick in the first round, selecting a player from college who has declared for the draft.

“I like the excitement of seeing what players go to each team and [seeing] what player my team picks,” freshman Gavin Arguez said.

The selection order is determined by each team’s record. The teams with the worst records pick first, while the two teams that played in the Super Bowl pick at the end of each round.

NFL.com states that unless trades occur, “each round starts with the team that finished with the worst record and ends with the Super Bowl champions.”

This year, the Jacksonville Jaguars, who finished with a 1-15 record last season, hold the first overall pick. The Tampa Bay Buccaneers, coming off their second Super Bowl win, currently have the 32nd overall pick.

The draft will be held in person this year with the first round beginning at 8:00 PM. This is in contrast to last year’s draft, which was held virtually, with players and coaches setting up cameras in their houses.

A three-day fan event will also take place, but fans are required to wear masks and practice social distancing.

As for the draft prospects, Jacksonville is expected to select Clemson quarterback Trevor Lawrence with the first overall pick. The Jaguars coaching staff, led by new head coach Urban Meyer, has reportedly even shown Lawrence a copy of their playbook.

The New York Jets, who possess the second overall pick, are also expected to draft a quarterback, after trading away quarterback Sam Darnold. Darnold’s career has been riddled with injuries so far.

The Jets will have many options to choose from, and their pick will affect the franchise for years to come.

The 2021 draft class has many great players in other positions as well, including Alabama receiver Devonta Smith. Smith recently won the Heisman trophy, which is awarded to the best player in college football. He became the first player in his position to do so since 1991.

This year’s draft class could be one of the best for wide receivers in NFL history, with Louisiana State receiver Ja’Marr Chase and Alabama receiver Jaylen Waddle both expecting to be top ten picks.

Florida tight end Kyle Pitts is expected to be the first tight end off the board, and some analysts say he will be drafted somewhere in the top ten, along with LSU receiver Ja’Marr Chase, who decided to opt-out of the 2020 college football season, after having an amazing 2019 season as a sophomore.

“I think Kyle Pitts is the most talented player in the draft,” freshman Alec Gordon said. “He could be a superstar.”

Offensive tackle Penei Sewell, who played college football at Oregon, was ranked by Pro Football Focus as being the best prospect at his position since 2014. He is expected to be the first offensive lineman drafted this year.

Cornerback is another position with a lot of options in this year’s draft. Some notable names are Alabama’s Patrick Surtain, South Carolina’s Jaycee Horn, and Virginia Tech’s Caleb Farley.

“I personally would like my [favorite] team, the Dallas Cowboys, to draft cornerback Patrick Surtain II out of Alabama,”  Arguez said.

Alabama, who won the college football National Championship, had many players including Jones, Smith and Surtain who are expected to be picked towards the beginning of the first round.

Teams are also not afraid to trade picks. Some trades have already been made, and many more will be made on draft night.

Miami Dolphins general manager Chris Grier pulled off a wild string of trades in March. Miami sent the third overall pick to the San Francisco 49ers, in return for the 12th overall pick and several first-round picks in future years.

The Dolphins then sent the number 12 pick and one of their future firsts to the Philadelphia Eagles, in return for the sixth overall pick. Miami now has a bird’s eye view of the draft and could trade down further depending on how the draft unfolds.

With a week left until draft day, many things will change and a plethora of trades will be made. Many players’ dreams will come true, and fans will have mixed reactions with who the new players will be.