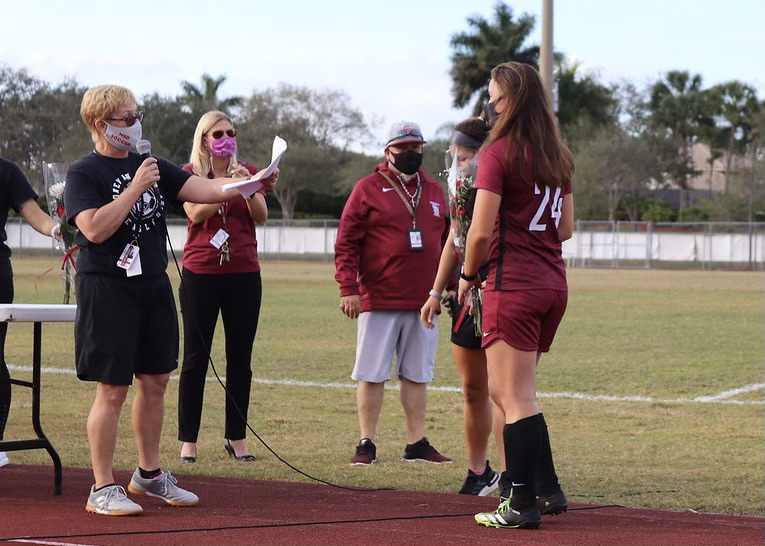 Inspiring the Team to Success. Coach Laura Rountree celebrates senior defender Jordan Carrey (24) on the Eagles senior night. Rountree prepared words for Carrey and the other 4 seniors on Girl's Varsity Soccer during the Jan. 25 senior night. Photo by Bryan Nguyen.

The Marjory Stoneman Douglas women’s varsity soccer team made their outstanding playoff run earlier in the 2020-2021 school year, and many awards were handed out to players and coaches around the district. One of these awards was given to Coach Laura Rountree, who helped guide the team towards their many victories.

Rountree earned the Sun Sentinel Broward 7A-6A Girls Soccer Coach of the Year, which came as no surprise to the players, coaches, and fans of the MSD girls soccer team.

“All the accolades and praise goes to the girls,” Rountree said. “They are truly overcomers, especially the senior class with all they have been through in their career. To have won three district championships in a row and win a regional championship in their senior year is a reflection of their will to overcome and be resilient.”

Rountree’s achievement was motivated by many aspects of her coaching. Her players and other coaches know her for her determination and push towards excellence. Rountree encouraged her team towards giving it their all during the final stages of the season, which is evidence of how the Eagles were able to go on a deep playoff run.

“Coach Rountree is the most dedicated, passionate, hard-working coach I have ever met. She plans every practice to cater to what the team needs, is flexible with her methods of instruction, and puts her heart and soul into every practice, game, and player all season long,” assistant coach McKenzie Malone said.

Constantly pushing her team forward made Rountree a clear candidate for the award, and doing so allowed for greater accomplishments to be reached by the team. By driving the Eagles forward, Rountree also brought the team closer together.

“My first year I was one of the only freshmen on the team and Coach Rountree from the first day made me feel as if I was part of the family. Her amazing coaching skills and positive energy helps me perform well and allows the team to be successful,” forward Molly Conn (12) said.

Igniting great team chemistry is an important aspect of Rountree’s coaching, as she prioritizes the team over the result. Making the team better is Rountree’s main goal when coaching, which translates on the field as the Eagles frequently win.

“As a coaching staff, we try to organize training sessions to help the teamwork on daily improvement, both individually and collectively as a unit,” Rountree said. “The daily focus is to instill a positive attitude and work ethic, to be an excellent team member, learning from our mistakes, and making corrections as we go.”

Rountree stresses the enhancement of her team over all other aims of her coaching, which allows for her to become an important presence within the team’s composition.

“We strive to challenge [the team] daily, provide encouragement along the journey, work hard to push them to challenge each other, and always give their best for the good of the team. The team always comes first!” Rountree said.

The team’s success is a clear reflection of Rountree’s coaching abilities, and her long line of experience with the MSD soccer team shows proof.

Rountree began coaching for MSD in 1990, and she stayed until 2006. When Rountree saw an opportunity to return to MSD in 2018, she agreed. Ever since returning, Rountree turned the women’s soccer program back into a dominant team, as they have now won three consecutive district titles.

Rountree’s coaching methods have been instrumental in the improvement of the team from the start of the season, which made her one of the first coaches considered for this award. After winning the District and Regional Championships, it was clear that Rountree would be recognized for her accomplishments with the girls’ team.

“I think she won the award because she is so kind and warm to everyone she meets, but has so much focus and drive when it comes to her team, and the other coaches and players in the district see that. She is very much deserving of the award, and I’m proud to be her assistant coach,” Malone said.

The Eagles’ success in the 2020-2021 season was guided by Rountree’s style and tactics, and her continuous drive towards improvement helped earn her the District 7A Coach of the Year award.

“I could not have been more proud of the season that the girls’ soccer team had. They worked hard every day to get better, focusing on one day at a time. Their team cohesiveness, positive spirit, and incredible work effort were key ingredients to their success. I am so honored and blessed to be their coach, and I give them all the credit.” Rountree said.

Rountree’s award serves as a representation of the Eagles’ tremendous season, and the strive for victory that will greatly influence seasons to come.