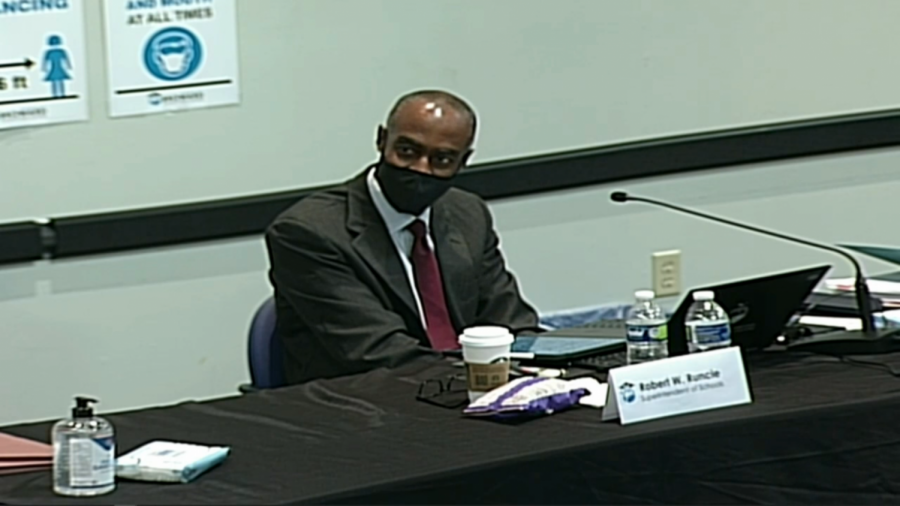 Superintendent Robert Runcie during the special school board meeting where he and school board lawyer Barbara Mynick announced their intentions to resign. Photo courtesy of the Broward County School Board

On Tuesday, April 27, Broward County Public Schools Superintendent Robert Runcie offered to resign his position at a special school board meeting. Despite being recently arrested for perjury, he stated his intentions to resign were due to the alleged continuous blame for the events that occurred at Marjory Stoneman Douglas High School on Feb. 14, 2018.

Runcie was arrested on the morning of April 21 for perjury related to his testimonies on March 31 and April 1 before a grand jury. The purpose of this arrest was related to investigating the enforcement of statewide school safety laws. He was released on bond the following morning.

Earlier in the day, Runcie released a video statement claiming his determination to abide by his duties as superintendent, despite the supposed political motivation behind his arrests and Florida Governor Ron DeSantis’s disapproval of his performance as superintendent.

“I am confident that I will be vindicated, and I intend to continue to carry out my responsibilities as superintendent with the highest degree of integrity and moral standards as I have done for nearly 10 years,” Runcie said in the statement.

However, later that evening, this claim was contradicted when he pronounced his resignation to give Parkland residents the “peace” they deserve.

“I too, cannot continue under the scrutiny of every time we have a board meeting each of you send me an email telling me of every mistake I made,” Myrick said at the Tuesday school board meeting.

Runcie’s exact date of resignation and successor are unclear at this time. Nonetheless, Broward School Board Chair Rosalind Osgood and a to-be-determined attorney will soon negotiate a separation agreement with both Runcie and Myrick before the school board’s next meeting on Thursday, April 29. At this time, the decision could be voted on and approved.