THE EAGLE EYE • May 3, 2021 • https://eagleeye.news/21421/sports/msd-varsity-baseball-powers-past-calvary-christian-academy/ 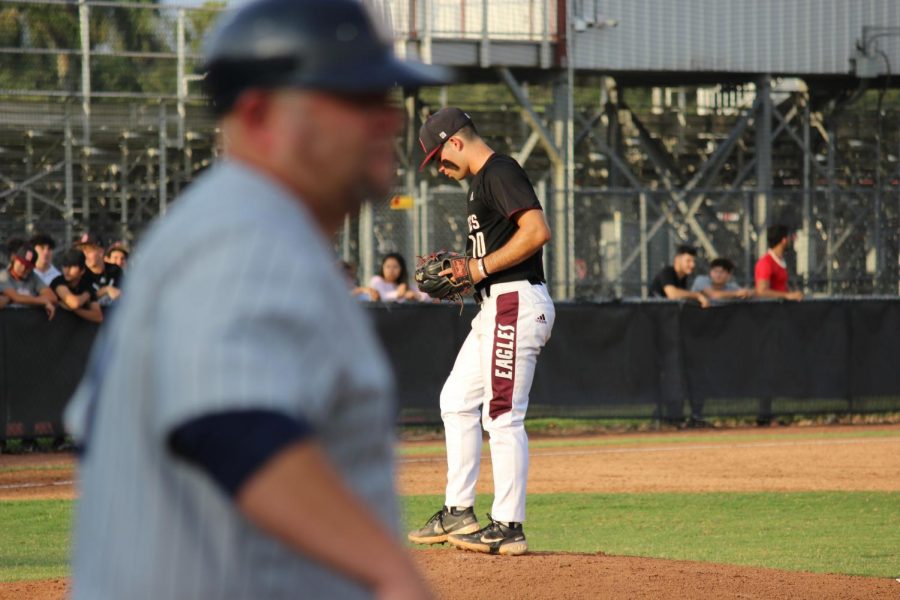 Pitcher Christian Rodriguez (10) steps up to the plate as he prepares to pitch against Calvary Christian Academy on April 21. After getting out of the first inning giving up two runs, he would settle in to throw four scoreless innings and hold Calvary Christian to just the two solo home runs. Photo by Theron Piccininni

Pitcher Christian Rodriguez (10), who performed brilliantly on the mound for the Eagles through five innings. Rodriguez’s first-inning started roughly when he gave up two solo home runs. After getting out of the first inning giving up two runs, he would settle in to throw four scoreless innings and hold Calvary to just the two.

Calvary’s pitching would hold the Eagles scoreless through two innings, but the Eagles offense would break through with two outs when right fielder Jake Clemente (24) would single to drive in pinch runner Dillon Moquin (15) and move the score to 2-1.

In the fourth inning, the Eagles would tie up the game on a line-drive single to left-center field from third baseman Gavin Conticello (11), driving in Chris McKenna (21) to tie up the game at 2-2.

The Eagles blew the game open in the bottom of the fifth, after an error made by the Calvary catcher drove in a run. Then, pinch hitter Niko Benestad (31) crushed a two-run double to left-center driving in pinch runner Alex Rodriguez (16) and second baseman Cam Harris (6) to move the score to a 5-2 lead for the Eagles.

Christian Rodriguez would cruise through the next four innings until he reached 94 pitches when he was pulled for relief pitcher Derek Rodriguez (2).

“I feel good about my performance. I think I did well keeping us in the game, especially after the rough first inning,” Christain said.

Derek would throw a scoreless sixth inning, picking up a strikeout along the way.

The Eagles did damage in the bottom of the sixth, as a walk from catcher Santiago Ordonez and hits from left fielder Chris Arroyo (4), Harris (6), and designated hitter Grant McDonald (8) would contribute to a four-run inning for the Eagles.

Calvary would score a run in the top of the seventh, but that wouldn’t be enough as Derek Rodriguez finished off the game without allowing any more.

As the seventh and final inning came to a close, the Eagles obtained the win with a final score of 9-3.