THE EAGLE EYE • May 9, 2021 • https://eagleeye.news/21477/artsandleisure/top-ten-most-popular-netflix-shows-and-movies-right-now/ 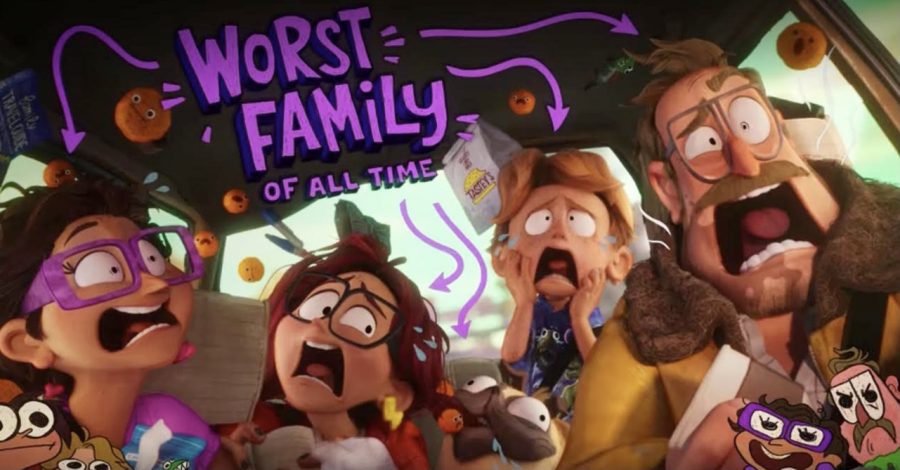 The Mitchells- Katie, Rick, Linda and Aaron are on a road trip to bring them closer together and save the world. Photo courtesy of Netflix

In light of the ongoing COVID-19 pandemic, people are still advised to practice social distancing and stay home as much as possible. Due to the virus and the stress of current worldwide issues, society needs self-care and rest now more than ever.

“[During this pandemic,] Netflix has entertained me and kept me from being bored,” Marjory Stoneman Douglas High School freshman Amaris Ruddock said. “It has [also] kept me happy and sane during these uncertain times.”

While we are still staying socially distant and are home much as possible Netflix is here to help with ten entertaining shows. Ahead are the 10 series and movies that Netflix fans in the United States are currently watching.

“Cocomelon” is number 10 in the U.S. today. It first started off as a children’s YouTube channel and is now streaming on Netflix. This 2 season series will keep your kids engaged and educated with new skills they need to know for preschool such as numbers, letters, animals, nursery rhymes, and a song to teach each lesson.

9. The Circle (A Social Media Competition)

“The Circle” is back for season two and is number nine in the U.S. today. The reality show hosts aspiring influencers who must compete to see which of them is the most influential. However, the twist is that some of the contestants are not who they claim to be, as they are catfishes. “Once you get past the odd format, The Circle provides some reality TV thrills akin to what you see in Big Brother, with the added glee of seeing how far the catfishers get. In fact, we’re rooting for one of them to win the whole thing,” writer Joel Keller said in interviewing with Deciders in May.

“The movie attempts to be a feminist fable of sorts, a ghost story with a point beyond the creepy atmosphere and jump scares, but it never churns up much beneath the surface. As a character piece, it’s the movie equivalent of a page-turner novel, and about as deep as an ant’s foot bath,” writer John Sebra said when Interviewing with Decider’s news in May.

“The Innocent” is number seven in the U.S. today and is a Netflix original limited series produced in Spain and is a product of author Harlan Coben’s in which he made a deal with Netflix to turn 14 of his popular books into series or films.

“The Innocent” also stars one of Spain’s biggest actors, Mario Casas, as Matt, a man who accidentally kills someone while trying to break up a fight. After serving his time and starting over, a mysterious phone call to his wife upends his entire life.

“Green zone” is number six in the U.S. today. It starts off enthusiastically with soldiers in Iraq trying to seek out weapons of mass destruction. Along the journey, a soldier and his team stumble upon something that makes them question everything about the military.

“Love Happens” takes number five on Netflix in the U.S. today and starts off with Dr. Burke Ryan (Aaron Eckhart) being forced to take his own advice when meeting with Eloise Chandler (Jennifer Aniston) who inspires him to address his painful past.

Everyone’s favorite gang of escaped zoo animals is back and is number 4 in the U.S. today. This time the animals are trying to come up with a plan to return back to New York City. Unfortunately, their plan is ruined by a skilled animal control officer who tries to hunt them down.

“Madagascar is my favorite as it’s funny and it brings me back to my childhood, even though it has been out for a while it’s still managed to be one of the top ten movies on Netflix,” senior Trishana Mungal said. “This movie is a great family movie to get a good laugh in and enjoy your free time.”

“Serena The Series” is number three in the U.S. today. It demonstrates a life story based on Selena Quintanilla, the Queen of Tejano music and an iconic Mexican- American pop star.

The original series “Shadow and Bone” takes place number two, as it is based on the Leigh Bardugo novels of the same name. “Shadow and Bone,” tells the journey of young mapmaker Alina Starkov (Jessie Mei Li) who finds out that she might have the magical power to save her homeland from a horrific scar on the landscape: The Shadow Fold. Torn from her best friend and stuck with General Jirigan (Ben Barned,) mystery and adventure await this young girl whose powers have only just scratched the surface.

1. The Mitchells vs. The Machines

“The Mitchells vs. The Machines” is the number one movie in the U.S. today on Netflix. The plot of the movie focuses on a family that goes on a road trip in an attempt to bring one another closer together. However, during the road trip, the Mitchells are forced off the trip against deadly robots set on bringing about the end of humanity.