THE EAGLE EYE • May 16, 2021 • https://eagleeye.news/21526/artsandleisure/review-jujutsu-kaisens-first-season-beautifully-introduces-its-complex-demonic-world/ 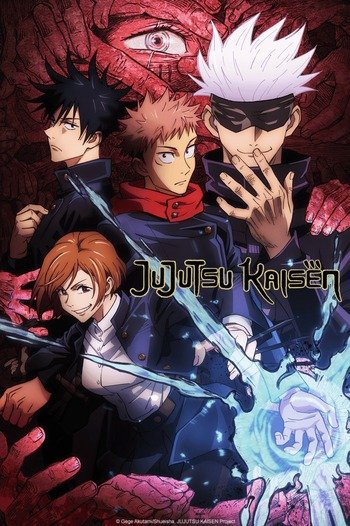 Welcome to wizarding school. Curses, or evil demons manifested from negative energy, surround Yuji Itadori (center), Megumi Fushiguro (top left), and Nobara Kugisaki (middle left), students at Tokyo Jujutsu High, and their teacher Satoru Gojo (top right). In the anime Jujutsu Kaisen, Yuji Itadori sought a “proper death”, or unregretful life for those around him, as he faced human hostility towards his status of being possessed by a Curse and violence from Curses themselves.

For those who denounce mainstream pop culture: do not miss out on Jujutsu Kaisen, for it has earned its rightful popularity. This anime is a wave worth riding, able to be enjoyed by people of all backgrounds and all levels of familiarity with anime.

It has elevated the standards for shounen anime, from its subverted, nuanced and unique takes on tropes and cliches, to its action-packed choreography and conflicts, to its fluid animation and its personable characters.

Jujutsu Kaisen is a manga written by Gege Akutami and has been adapted into a 24-episode anime by MAPPA studio. Its story is set in a world where humans give off negative energy. Jujutsu Sorcerers are those who are trained to use this energy in order to protect non-users from Curses, evil manifestations of hatred.

Yuji Itadori, a physically adept, sweet boy, aspires to give those around him a “proper death,” or an ending to an unregretful life. After being possessed by Sukuna, the immortal King of Curses, he agrees to collect Sukuna’s fingers to make the demon killable, as the Jujutsu sorcerers have slated him for execution.

One of the most controversial aspects of the anime is its cliff’s edge dance between new and redundant concepts. Jujutsu Kaisen seeks to present a revitalized take on timeworn anime tropes, such as the heroic boy possessed by a powerful demon, the exorcism school and monsters birthed from negative emotions. In order to do so, it first demonstrates to the audience its application of these tropes, which sacrifices some of its individuality and freshness.

This is particularly evident at the beginning of the first season, as like any other art, Jujutsu Kaisen takes the time to slow its pace and set up the fundamental aspects of its story, in order for the reader to grasp the components of the narrative. However, these faults do not detract from the overall quality of the anime, as it soon quickens its pace and turns the weakness of redundancy into its greatest strength.

Those who are familiar with these tropes pick up on the story quicker, and those who are unfamiliar avoid the initial obstacle of a boring premise. Nonetheless, watchers will inevitably be shocked and engrossed in the inevitable moments where Jujutsu Kaisen subverts the watcher’s expectations and creates an entirely new experience from its building blocks.

This is most simply seen by the contrasting larger-than-life characters, such as the fantastically assertive Nobara Kugisaki, the outwardly aloof Megumi Fushiguro, the literal panda and the childish but dangerously intuitive Mahito. Also exemplary is how obstacles such as the students’ missions and school events are often resolved with grave, absurd and long-reaching repercussions.

In its first season, Jujutsu Kaisen also provides the watcher a taste of its mature and poignant themes. It sets up thematic elements centering around the conflicts of who deserves to live, who truly is “human,” whose way of life is correct or incorrect and finding purpose in life. Ultimately, this anime explores what occurs when peoples’ ideals push them to seek reform at the expense of the current societal order.

There is no doubt that the show’s message is mature, and its harshness is expertly expressed through the horrifyingly beautiful displays and sequences. Body horror and death are commonly spotted from the start, and serve to illustrate the motivations of the instigators of this destruction to incite its responders.

When Curses strike down humans, their absolute lack of remorse highlights their utter disregard for humanity. These detested monsters justify their actions with the notion that they are “pure” in their identity and are therefore far more representative of the truth than sorcerers, similarly immoral Curse killers, but worsened by the hubris of humans. Although they are unrelatable in their evil, they are understandable in their strong adherence to their ideals.

Reform is found in the Curses’ desire to uproot humans as the dominant race, as well as in several of the characters’ discomfort with societal expectations. In this world, sorcerer bloodlines are used by many students’ respective families to justify their mistreatment and oppression, and these students’ backlash signifies their reformative movement against traditionalism.

Similarly, Itadori’s status as a human-Curse entity causes many to deem him lesser than human, which often leads him to face both human and Curse instigated hostility and violence. His conflicts against both societal and physical constraints paint a picture of how he seeks to protect his humanity, values and friends he holds dear.

In the first season of Jujutsu Kaisen, shounen anime tradition is both taken to heart and twisted into modernity, given two-dimensional form by this beautiful urban fantasy. Akutami solidly sets up the fundamental chess pieces of art, characters and story needed to ultimately orchestrate a battle of societal rule and upheaval. Already, this anime’s kingly popularity marks the potential of what is to come.