THE EAGLE EYE • May 19, 2021 • https://eagleeye.news/21546/sports/girls-varsity-lacrosse-ends-season-as-district-champions-and-regional-runner-up-after-a-successful-playoff-run/ 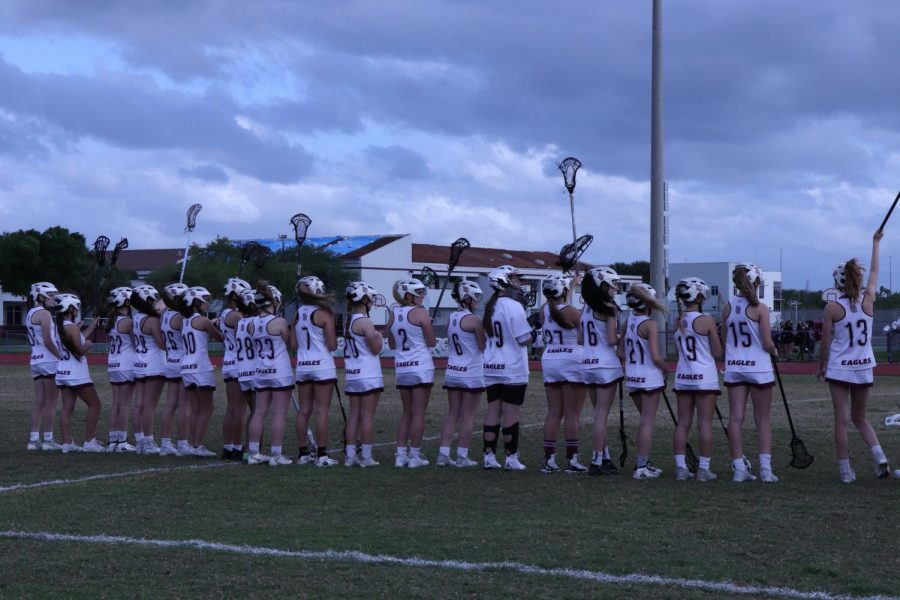 Lady Eagles cheer for their teammates as their names are being called. Photo by Kelsie Yon

After tryouts and training in early January, the MSD women’s varsity lacrosse team prepared for another season of high expectations. These high standards come after their 7-0 record during the 2019-2020 season was cut short due to COVID-19 restrictions.

With skilled seniors, such as midfielders Sammy Fischer (5) and Lauren Figas (12) playing in their final seasons at MSD, the Eagles sought to capitalize on their abilities and have a similar start to the previous season.

Early on, the Eagles were dominant in two games away from home to begin the season. On Friday, Apr. 19, the girls controlled the game from start to finish with a 20-7 win against the Benjamin Buccaneers, capitalized by eight goals from Figas.

Their second away match was against West Boca Raton High School, where another determined performance gave the Eagles a 20-0 win.

Finally, the Eagles returned to Cumber Stadium for their first home match of the year, where much of the same consistency showed for the team. On Mar. 3, the Eagles would take on the Saint Andrew’s Scots as they displayed their progress with a 21-8 win against a difficult opponent.

The Eagles achieved a 3-0 record by this point, looking like a strong competitor for playoff titles that were anticipated from the start of the season. This success was led by Fischer and Figas, both nearing 20 goals for the season, as well as other star contributors, such as attacker Carli Fleischer (14) and midfielder Skylar Gerena (13) who added to the team’s firepower.

The Eagles faced their toughest test in their fourth match, playing the St. Thomas Aquinas Raiders on Friday, Mar. 5. Not only was St. Thomas ranked amongst the top five teams for women’s lacrosse in the nation but the Eagles also had to play a third game in just five days to complete the week.

This fatigue showed early on, as the Raiders were able to keep the Eagles attackers out of the match. The defense also faced difficulty and could not keep up with the talent of St. Thomas. The match ended 16-4 in favor of the Raiders, meaning the Eagles suffered their first defeat of the season and dropped to a 3-1 record.

The Eagles returned home and were given a few days’ rest before their next match on Mar. 10 against the Spanish River Sharks. This match would serve as both the boy’s and girl’s senior night.

“We all worked together to move on from that loss, it was a tough game but we brought everybody in and worked really hard on senior night,” Figas said, with her five goals leading the way for the Eagles that night.

The game that followed was against the American Heritage Stallions on Mar. 30, who were ranked as the top team in the country. The skilled players they faced along with the nearly three-week break which slowed the Eagles’ momentum caused the team to play at a much lower standard than usual.

The Stallions capitalized on this with goals early in the match that made an insurmountable deficit for the Eagles. By the final whistle, the Eagles had conceded 18 goals in a poor defensive performance that led to an 18-8 defeat.

With not even a full day to recover, the Eagles faced the Park Vista Cobras at home on Mar. 31, needing to regain consistent performances as the playoffs approached. The Cobras were no match for the determination of the Eagles, leading to a lopsided final score of 18-3 in favor of MSD.

At a record of 5-2, the Eagles entered their final game of the regular season striving to not only stay consistent with another win but also hoping to improve their divisional record to assure an easier path through the district playoffs. The Eagles would play St. John Paul II Academy in an away match, needing a win to stay on track before playoffs.

The Eagles took over the match and jumped to an early double-digit lead, with goals coming from all across the team. With this final match on Apr. 7, the Eagles made sure to take care of business and took home a 20-9 win before the start of District Playoff games.

“We knew playoffs would consist of harder games so we had to create new plays and strategies to increase our chances,” Fischer said.

After ending the season with just two losses, the Eagles had to jump right into the playoffs with a solid mentality against tougher teams.

Having already defeated the Sharks earlier in the season by a sizable margin, the Eagles knew the correct game plan and were able to dominate most of the match. The team would win the first round of districts with a resounding score of 22-7, giving the team confidence for the rest of the playoffs.

Next, having to face the highly ranked Boca Raton Bobcats, the Eagles sought to finally take on a high-level opponent with confidence and be able to advance to the next round. This district championship match took place the day after the match against Spanish River, on Apr. 14.

While having to play games right after each other, the nearly fatigued Eagles, maintained their standard of play and got out to a fast start against the Bobcats. A dominant second half assured the Eagles victory as they once again planned correctly for a talented team.

“Since the playoffs started, the team has worked even harder and have really focused in. During the games, we always hype each other up and stick together. The team is super excited to reach regionals because it’s just another step towards states,” defender Gigi Sgammato (11) said.

After advancing past the district playoffs stage, MSD had to face the Palm Beach Central Broncos in the Regional Semifinals match. With another trip to the championship game on the line, the Eagles had to maintain focus and give another strong performance if they were to advance against a strong opponent.

With the contributions of captains Fischer, Figas, and captain attacker Alexa Kitaygorodsky (3), the Eagles jumped into a strong position by the end of the first half and never looked back.

The team took advantage of their progress and edged closer to the final whistle while maintaining a large lead. MSD finally won by a score of 21-7, moving to the Regional Final.

In the final, they would once again face the St. Thomas Aquinas Raiders on Apr. 29, who had been one of the Eagles’ most difficult opponents up until that point.

Although the team changed their stay of play and had prepared for the challenge, the second meeting of the two teams had a similar result to their first encounter.

The Raiders dominated after the start of the second half, where a close game became a blowout, and the Eagles could not find much space to operate before the score became lopsided. The Raiders would take home a 17-7 win to deny the Eagles of a Regional Championship.

“STA definitely capitalized on our mistakes physically and mentally. We are both strong teams, but I think our heads were not in it completely this last game. However, we did come out strong and still surprised them,” Fischer said.

By the end of the season, Fischer had accumulated 51 goals and 11 assists, while her partner in the attack, Lauren Figas, had contributed 49 goals and 11 assists throughout the year. These two seniors leave the school as a large part of the team’s success.

Though the season did not end in a Regional or State championship, the Eagles achieved many strong victories against highly ranked opponents, even after not having as much time to prepare as in previous years.

With many skilled players throughout each position, the MSD women’s varsity lacrosse team had a competitive run to advance to their first Regional FInal and complete a season full of success.