THE EAGLE EYE • May 22, 2021 • https://eagleeye.news/21588/sports/mens-varsity-lacrosse-team-reflects-upon-their-triumphant-season-after-regional-semifinals-loss/ 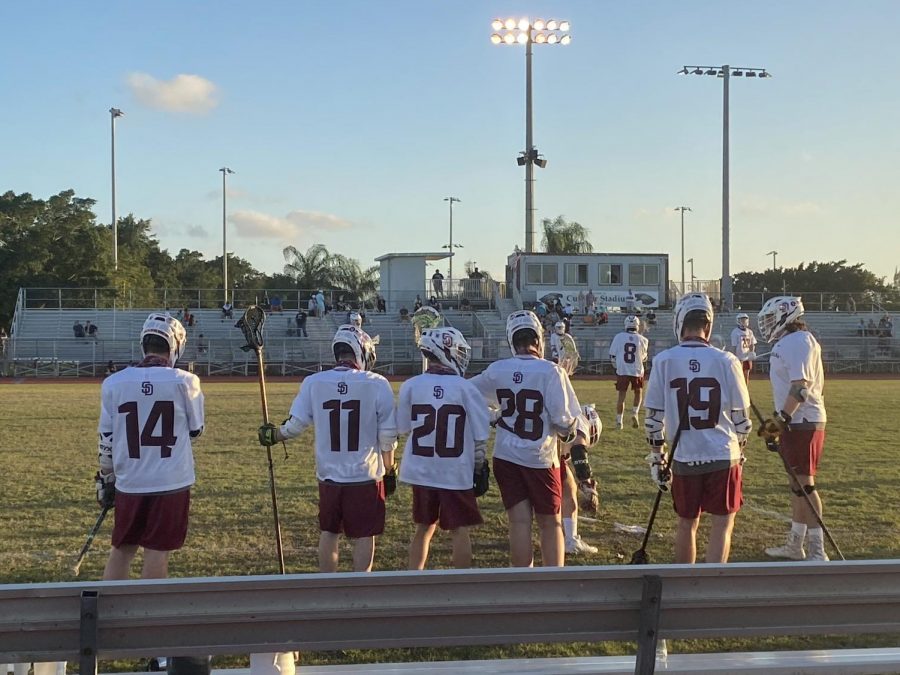 Sideline scouting. Players of the MSD men's varsity lacrosse team stand on the sidelines of Cumber Stadium after finishing their pregame warm-up in a game against Coral Springs. Photo by Reece Gary

On Friday, April 23, the Marjory Stoneman Douglas High School men’s varsity lacrosse team saw their successful season come to a close, as they fell short of a playoff victory against the Jupiter High Warriors. After their tough loss, the Eagles looked back on their season and the great progress that they have made.

With an entirely new team of returning players and players entering varsity for their first year, the Eagles worked on building team chemistry in order to grow and succeed throughout the season. The Eagles’ growth would end up being a victorious but difficult feat, as the team had a shortened preparation time due to COVID-19 interrupting high school sports throughout the 2020-2021 school year.

“We played pretty decent at first. The chemistry was low, but now we have built up a solid bond and our performance has been way better,” midfielder Landon Reuter (30) said.

Eventually, on Thursday, Feb. 18, the Eagles kicked off their 2021 season with a momentous start, as they secured a victory against the West Boca Raton Bulls with a score of 21-3. This victory foreshadowed the way their season played out, as the Eagles would ultimately continue their progress in the weeks to come.

The Eagles would move forward to win their next two games against Taravella and Coral Springs by large margins; however, their momentum was suddenly stopped as the team saw their first loss against the St. Andrews Scots, who are ranked as the No. 1 men’s varsity lacrosse team in the nation by MaxPreps.com, by a score of 12-4.

The Eagles took the loss as motivation for improvement, and they would go on to beat North Broward Prep in the following week. However, the Eagles suffered another defeat in their next match against St. Thomas Aquinas, which resulted in a score of 18-2.

“[The team] was a little shaky in the beginning, but towards the end of the season, we started to work together,” midfielder Jordan Sullivan (3) said.

The Eagles were looking to improve before the playoffs, but they entered a slump in the back-end March. During the rest of the month, the team played three games against Spanish River, Belen Jesuit and Boca Raton. However, they would only win one game, which was their 13-5 victory over Spanish River.

With a record of 5-4 and only two matches left before the playoffs, the Eagles needed a victory to maintain a winning record. If the Eagles were to lose both, the team would be in a bad position come playoff time with a losing record. This possibility drove the Eagles to play hard in their final two regular-season games and take advantage of their lower-ranked opponents.

In their game on April 6, the Eagles played a close match with American Heritage. Nonetheless, they got their much-needed victory with a score of 7-3, and they progressed into their final regular-season match.

The Eagles faced a tough opponent, the Pine Crest Panthers, on April 8. The team’s longing for victory wasn’t enough to finish the regular season on a win, as the Panthers got the edge with a 7-5 score.

As the Eagles looked towards playoffs, they saw the need for improvement, especially because their 6-5 record put them at a low playoff seed.

Their first playoff game was a district quarterfinals match against Boca Raton, whom they had lost to earlier in the season. The Eagles were looking for revenge on the opposing Bobcats, and the team had practiced a game plan that would help them achieve the goal.

With the team more efficient than in previous matches, the Eagles were able to get the edge over the Bobcats in a 6-5 victory. They would then move on to face Jupiter High in the district semifinals.

“[Our best game was] definitely our district game against Boca. We played great as a team and the feeling when we won was unforgettable,” Sullivan said.

The Eagles did not seem to be slowing down as they headed towards their match with Jupiter. However, Jupiter had outplayed the Eagles, leading to the end of their season with a 22-7 loss.

Although the Eagles fell short of achieving a district championship, the team is content with their performance: the team obtained a playoff win and many players improved their skills throughout the season.

Additionally, the team improved their chemistry and teamwork, which was shown through all aspects of their competitions. Many players of the men’s varsity lacrosse team, including Reuter and Sullivan, have agreed that the best quality of the team was their defense.