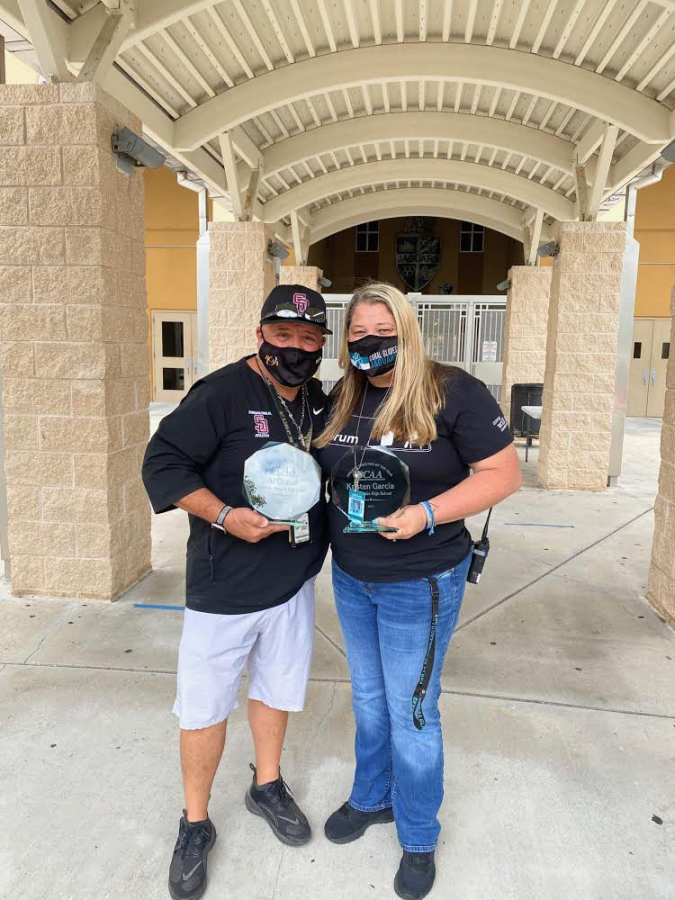 On Tuesday, May 18, 2021, Albert Guzzo, athletic director at Marjory Stoneman Douglas High School, was awarded Athletic Director of the Year. With all adversity faced this year, this accolade is certainly going on the resume for Coach Guzzo who was during his job through remote learning.

As an athletic director for 20 years, Guzzo has been heavily involved with aiding student athletes in their endeavors. With the widespread outbreak of COVID-19 beginning in March 2020, Guzzo faced various obstacles concerning carrying out sport seasons this school year. However, quite a few of the teams that were able to resume their season advanced to the playoffs and post-regular season games.

“We were able to maintain sports this year with five teams going to the state tournament,” Guzzo said.

Due to Guzzo’s hard work and dedication to his athletes  amidst the pandemic, he was granted  the title of “2020-2021 Athletic Director of the Year”, an award in which is organized by the Broward County Athletic Association.

“The director of athletics and activities along with the county athletic director chose the winner with the help of BCAA Sports,” Guzzo said.

With over 30 schools in Broward County, the selection process proved itself to be competitive. Yet,Guzzo earned the most votes in the district with the help of his team, staff and 20 year experience.

“With a variety of other individuals in the race as well, it’s not a competition,” Guzzo said. “Every year, the county chooses an athletic director out of 32 schools in the BCAA.”

Guzzo has further impacted the lives of the athletes coached by him, such as senior Daniel Haviv who described him as a leader who puts in effort and improved experience.

“He puts respect towards his job and team. To me, it shows his courage and ongoing passion he has for MSD and I can’t wait to see what’s in store for him in the future,” Haviv said.

For Guzzo, this award is a major achievement. With the school year coming to an end, this award will be with him throughout the remainder of his Athletic Director position and serve as a reminder of the work he has put in.