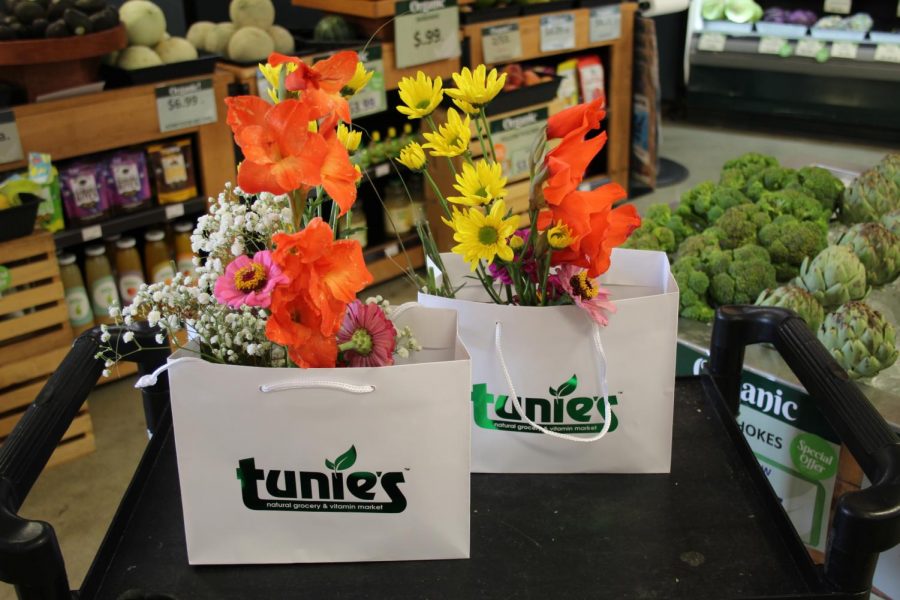 Fresh cut flowers from Marjory's Garden have been sold at Tunie's market for $9.99 since April 25. Photo by Dana Masri

Marjory’s Garden, located in the southwest corner of the Marjory Stoneman Douglas High School campus, hosts multiple activities each time a student joins a club session. Projects range from mulching the flower beds to fixing the hydraulic system. Each session involves breaking into groups while incorporating hands-on activities to benefit the garden.

Started in 2016 by MSD astronomy teacher Kyle Jeter and chemistry teacher Sean Simpson, Marjory’s Garden created a community for people who enjoy working in a garden. What started off as a piece of land where portables used to be was transformed into a garden full of different types of crops.

The area has grown throughout the years and as of April 25, the group started selling crops such as bouquets and lemongrass at Tunie’s Market, an organic market where natural vitamins and supplements, grocery items, household items and more are sold. Not only does the store sell products, but they also help educate the public about healthy living on their website.

Tunie’s Market had noticed that Marjory’s Garden had been growing produce and plants, which made them reach out to Jeter. They then decided to partner up with the student-run garden to show their support.

“We decided to do a Marjory’s Garden co-op with Tunie’s because we wanted to share the crops we have locally grown with our community,” historian Lauren Ofstein said.

The club is STEAM-oriented. Marjory’s Garden made sure that their business venture relates to STEAM as it includes aspects of biology for science, hydroponics for technology, irrigation and building flower beds for engineering, packaging for art and pricing and cost for math.

“Our partnership with Tunie’s will be advantageous toward the in-depth STEAM goal, especially considering the business and technological aspects,” Vice President Jennifer Scheckowitz said.

The crops sold so far include lemongrass, mulberries and flower bouquets. Individuals can purchase these products in several different forms.

The bouquets are wrapped with twine and placed in mason jars stuffed with moss, while mulberries are sold in plastic containers. Additionally, lemongrass is sold in bundles wrapped in twine as well. These plants can be bought in stores or can be pre-ordered online.

“Buyers enjoy the taste and the natural way of growing the mulberries,” Scheckowitz said. “We also sell bouquets for those who have an eye for finer things. We wrap the flowers methodically, so those who prefer the visual aesthetics have something over the delectable berries.”

The club has benefited from this partnership in numerous ways from solidifying its values to raising funds. The students partaking in Marjory’s Garden gain experience in areas such as business and botanical handling.

On the Tunie’s Market website, under the “Our Store” tab, individuals can select the drop-down menu to be led to Marjory’s Garden co-op. In that tab, pre-orders for products can be made.