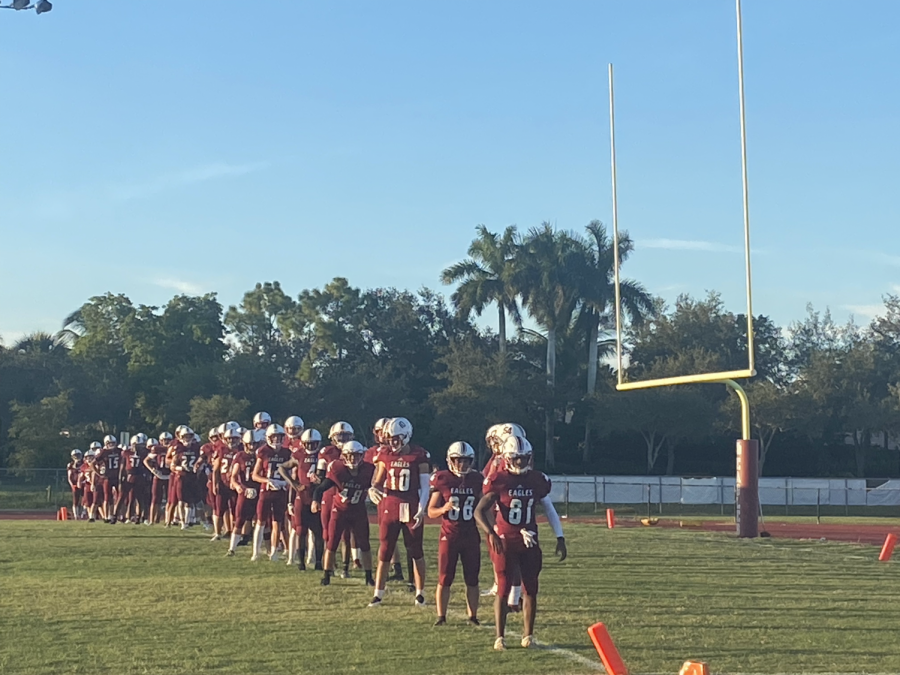 The MSD varsity football team lines up to stretch between the halves of the "Kickoff Classic" against the American Heritage Stallions.

After protocols from the COVID-19 pandemic limited capacity and game structure during the previous school year, fans were thrilled to be able to pack Cumber Stadium for the annual ‘Kickoff Classic.’ With full capacity crowds being allowed once more, the Eagles returned to action in a full stadium with supporters, band members and cheerleaders for the first time in over a year.

The Eagle were eager to obtain a victory in their first game of the year, especially after finishing the previous season with a 2-2 record. With continuous practices over the course of the summer, the team continues to practice and improve.

As the game, scheduled for 6 p.m., approached, fans cheered as the Eagles and Stallions rushed the field. The Stallions set up for kickoff and the Eagles prepared to receive the ball as the starting whistle was blown. Soon after, the Eagles were making their way upfield to mark the start of their promising season.

Both teams got off to a somewhat slow start as they were unable to score on their opening drives. However, the Eagles broke through the Stallions’ tight defense, nearing the opposing end-zone and getting close to a touchdown.

Following those plays, running back Matt Wilson (4) rushed through the middle of the Stallions’ line to score the first touchdown of the Eagles’ season.

“I ran behind my blocks and read the holes pretty well,” Wilson said.

The stadium roared as the Eagles were able to gain momentum from an early stage in the game. This momentum wasn’t enough for the special-teams squad as the Eagles missed their kick to only lead by six points.

The Eagles’ defense headed onto the field looking to gain another stop and allow the offense to score again. However, the Stallions fought back, scoring a touchdown and making their extra point. This mistake by the Eagles brought the score to 7-6. As a result,the Eagles sought to regain the lead after falling behind.

Eventually, the Eagles were able to do so as a deep pass to wide receiver Christian Spencer (6) found its way to the end-zone for another touchdown. This gave the Eagles their lead back, and the extra point was made to bring the score to 13-6 in favor of the home team.

Following the touchdown, the Eagles were able to prevent the Stallions from gaining points back, allowing the offense to take the field once again.

With the Eagles only leading by six points, halftime approached. Both teams huddled together to learn from their mistakes and skills from the first half, as the stadium lights glowed as the sun set.

Eventually, the teams made their way back onto the field, looking to cap off an engaging exhibition match.

Both teams remained to be heavily reliant on their defense in the third quarter, as the offenses were unable to score in the quarter’s duration. The tight defense of the Eagles included important performances from cornerback Luke Evans (7) and safety Chris Cepeda (2), who each blocked crucial passes to stop the Stallions’ offense.

Cornerback Lydro Tatoute (28), who was also a key player on the Eagles’ defense, believed the team’s defense was a result of well-played man coverage and their ability to stay disciplined.

With the score staying at 20-14, entering the final quarter, both teams were determined to put more points on the scoreboard.

The Eagles were able to achieve this goal early in the fourth quarter, as running back Jamari Leo (3) broke through the middle of the Stallions’ defensive line for a touchdown. With the extra point made, the Eagles jumped ahead to a 27-14 lead.

As the clock winded down to the last few minutes, the Stallions saw an opportunity to fight back, throwing a bullet through the Eagles’ defense for a touchdown. However, the Stallions’ comeback began a few minutes too late as the final whistle blew to mark the end of the game.

With the scoreboard reading 27-21 in favor of the Eagles, Cumber Stadium celebrated the Eagles’ strong start to their season.

“We played together as a team and didn’t give up on each other,” Wilson said.

Coming off the pre-season win, the Eagles look to claim another victory in their first regular-season game as they host Cooper City on Friday, Aug. 28 at 7:00 p.m.