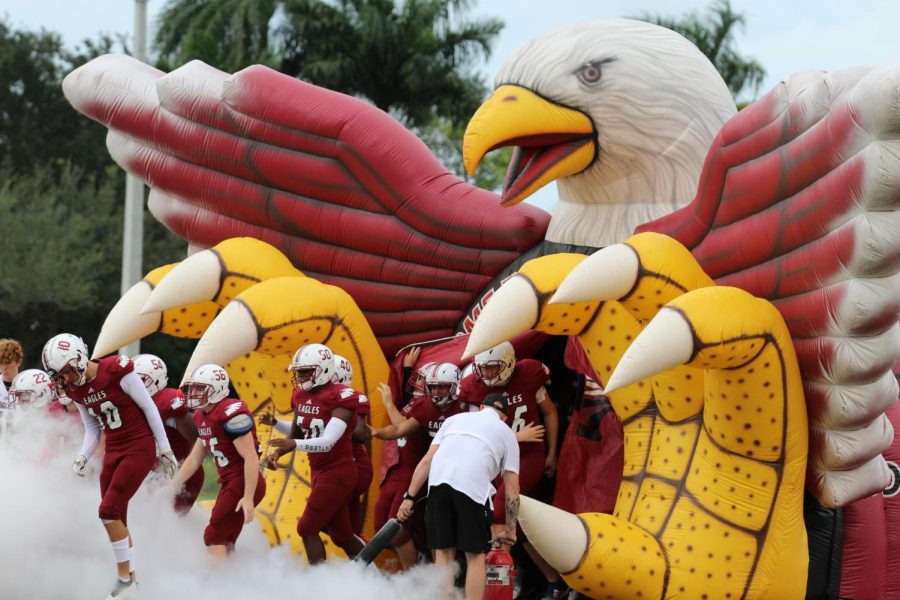 Start of the season. The MSD Eagles run out on to the field to play their first game of the season against Cooper City Cowboys.

The Eagles were fresh off a pre-season win against American Heritage High School. In their first regular-season game, the team was looking to start with a 1-0 record and improve on their 2-2 record from last year’s shortened season.

“My mindset coming into this game was to put a lot of points on the board and have a shutout,” quarterback Hunter Rose (11) said.

To begin the game, the Eagles started on defense and did not disappoint. Free Safety Chris Cepeda (2) came out with an early interception, allowing the offense to take the field.

“I believe we have always had a great team, but because of Covid last year, our season was cut short,” Cepeda said. “We couldn’t showcase how great our team really was.”

Shortly after the interception, running back Matt Wilson (4) made a deep run all the way to the end zone for an Eagles touchdown. This play brought the score to 7-0 and ended the first quarter.

The second quarter was highlighted by yet another touchdown by running back Matt Wilson (4). Wilson was not the only player to keep the Eagles ahead, as quarterback Ryan Spallina (15) tossed a touchdown to wide receiver Hervin Louis (5), ending the first half of the game with a 21-0 lead over the Cowboys.

The Eagles offense did not slow down as they started the third quarter with wide receiver Hervin Louis (5) scoring another touchdown.

The Eagles also made significant defensive plays and did not allow the Cowboys to get to the end zone. Cepeda was able to get another interception to finish the third quarter.

In the final quarter of the game, the defense still did not allow the Cowboys to score, ultimately leaving them scoreless for the remainder of the game. The Eagles capped off their performance with a rushing touchdown by running back Justin Spano (20).

With the fourth quarter ending and the scoreboard sitting at a large lead of 33-0 for the Eagles, they were able to take home their first win of the season and bring their record to 1-0.

“I feel like we are one of the top public schools in South Florida,” Rose said. “We are going to make it far in the playoffs.”

The Eagles are hoping to get their second win this season on Thursday, Sep. 2, at Coconut Creek High School.