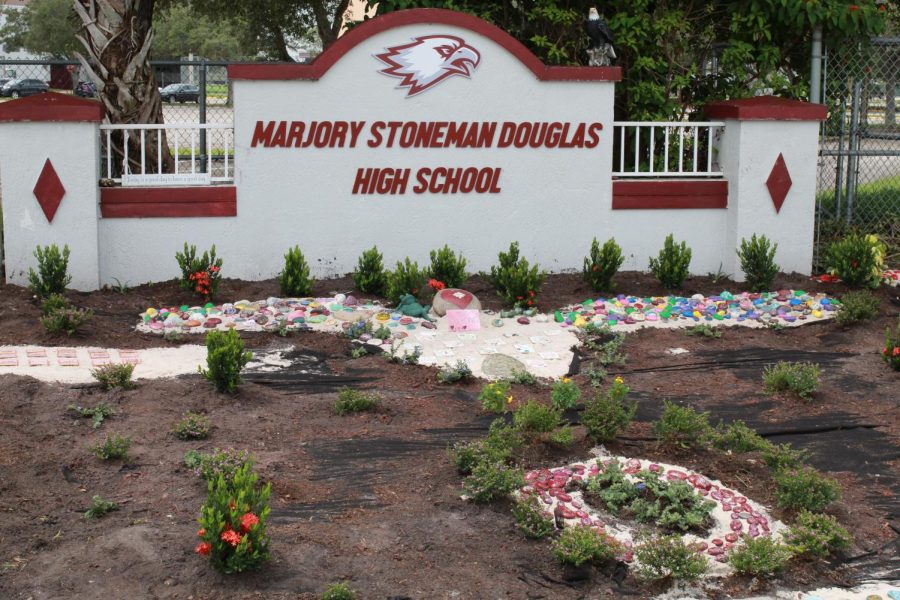 The outcome of dozens of volunteers working on Project Grow Love.

Rocks painted with memories, angel statues with a meaning of hope and benches to sit and reflect. Each of these items make up a part of Project Grow Love, a small memorial garden planted at Marjory Stoneman Douglas High School’s northeast corner to remember the 17 students and staff members whose lives were lost in the school shooting on Feb. 14, 2018.

On Saturday, Aug. 28, the community was invited to an event to revitalize and replant Project Grow Love.

The idea for “Project Grow Love” started in December 2018 when MSD teacher Ronit Reoven and alumna Victoria (Tori) Gonzalez (Class of 2019) wanted to create a safe space for the community. Their project began when they planted a few flowers in front of the school sign on the corner of Holmberg Road and Pine Island Road as a place for students and faculty to reflect and find peace after the shooting. This area flourished overtime to include valuable tokens that members of the community periodically added to the garden.

“I started the project because I felt there needed to be a place for the community to come together and be able to honor, reflect, and pay their respect to the 17 eagles we lost,” Reoven said. “There was no place for people outside the school to do that and that corner, once barren, dirt-ridden, and unkempt, seemed like the perfect place to create a memorial garden in which the community could come together, show some love and take part in planting beautiful flowers in respect for the lives lost.”

When the garden was developed, no plan was considered for the future perpetual care of the plantings. The garden relied entirely on volunteers and donations.

In August 2021, the City of Parkland reached out to the MSD administration to discuss the need for the area to be revitalized. The city received multiple complaints about the state of the corner garden.

The MSD administration and Reoven met with the city to review the proposal to restore the area, which included the city taking over and paying for the maintenance of the garden going forward.

“This project was necessary due to the deteriorating condition of the garden. Unfortunately, it had been overtaken by weeds and there were many items left there that had deteriorated over time. The benches were removed during the revitalization project and are currently waiting to be cleaned,” principal Michelle Kefford said. “Additionally, there was a problem with rodents in the garden.”

MSD administration contacted the student and parent community using ParentLink throughout the week regarding the removal, which occurred several days earlier than planned on Aug. 9.

In response to the garden’s removal, some in the community were unhappy with the change and the communication leading up to the replanting of Project Grow Love.

Gina was one of the 17 victims who lost their life due to the tragedy. She was a 14-year-old freshman.

In order to bring the community together on the revitalization, the City of Parkland and MSD co-hosted an event on Saturday, Aug. 28 from 9 a.m to 11 a.m. open to anyone in the community to come and assist with the restoration of the garden.

Approximately 40 community members, including students, parents, local officials and residents came out to lend a hand in the revitalization project.

“I came to show my support because I was a freshman during the shooting, and I just wanted to come out and help,” alumnus Anthony Benitez said.

Volunteers could help plant new greenery, which was selected for its ability to thrive with little water, or place items from the old garden, like hand-painted rocks, back into the area.

Eagles’ Haven, an organization created in 2019 that provides therapy, wellness experiences, support groups, trauma education and more to members of the community affected by the tragedy, provided materials for community members to personalize. This included painting new rocks to place in the garden.

“We provided the rocks and the paint pens so that the community could replace any rocks that had deteriorated due to weather, but also to be [at the restoration] as support because I know it is a difficult day,” Eagles’ Haven Director Rebecca Jarquin said.

Over the course of its existence, the community garden became a site of tranquility for anyone to visit. Project Grow Love was the start of a healing process for many, serving as a place of hope and reminiscence.

Project Grow Love is located on the corner of Holmberg Road and Pine Island Boulevard in front of the school sign for anyone to see and visit.