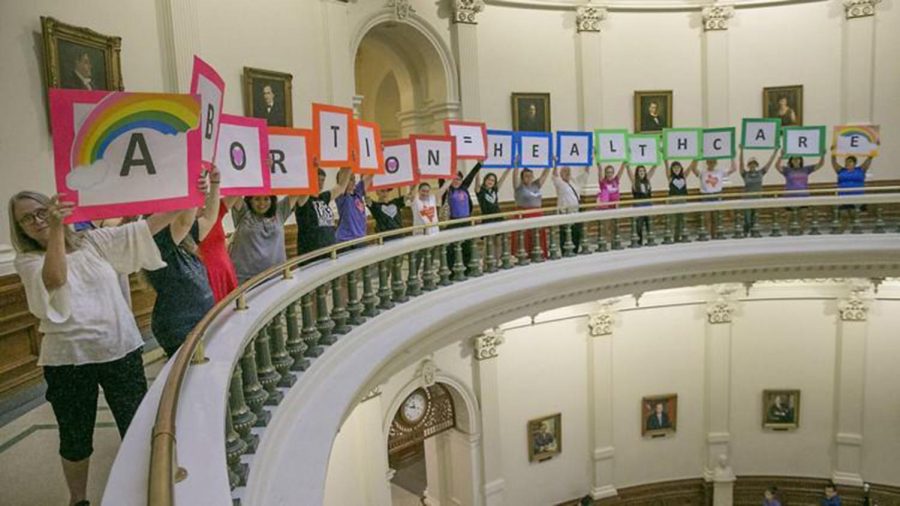 Abortion rights advocates protest abortion restrictions being debated in the Texas House on July 2017 at the Capitol. Photo courtesy of Ralph Barrera

Approximately four months ago, Texas Governor Greg Abbott signed a bill that aimed to essentially eliminate all (safe) abortions, more specifcally those that are after six weeks of initial pregnancy.

As of Wednesday, Sept. 1, 2021, Texas Senate Bill 8 (TXSB8), or more commonly known as the “heartbeat bill,” is now officially set in motion to demolish the past 48 years of protest for safe and legal abortions since Roe v. Wade, the 1973 decision that protects the constitutional right to have an abortion.

Under previous Texas law, anyone could get an abortion up to 20 weeks of onset pregancy. Only people with life-threatening conditions or a fetus with a severe abnormality could have an abortion after this period of time.

Not only is this bill obviously written by egotistical, control-seeking white men who clearly know nothing of the female reproductive system, but is also a detrimental catalyst to make placing the blame and consequences of rape and incest on women a commonplace ideaology.

The six week period of time that allocates legal abortions is simply insufficient for a woman to properly determine a missed menstrual cycle, which would take at the very minimum four weeks, make an OB/GYN appointment, confirm a pregancy and decide whether they wish to abort the fetus. Most women do not even know they are pregnant until five and a half weeks after inception.

This bill is not only a clear attack on adult women who simply wish to be childless, but also on teenagers and children who fall victims to rape and incest.

Under TXSB8 there are no exceptions set in place for such cases. For instance, in the state of Texas if an 8-year-old girl was raped and impregnated by her father or brother, she would be forced to not only unsafely carry to term, but also sued if she attempted to abort the fetus before six weeks, way before anyone, let alone an 8-year-old, can be aware that they are pregnant. Anyone who set out to assist this young girl, even her Uber driver to the clinic, would be seen as “accomplices” and could be sued for $10,000 as well.

This misogynistic law is teaching children and adults that the consequences of rape fall more on the victim than the rapist themselves, leading to a world where rapists walk freely among the streets as men that had a “misunderstanding” while victims suffer fines and potentially fatal, unwanted pregnancies.

When those in power, such as Florida House Speaker José Oliva or Texas Gov. Greg Abbott, refer to pregnant women as “host bodies” or tell their state that they will “eliminate all rapists from the streets,” it is excruciatingly evident that these male Republican leaders and their supporters hold no respect for the female gender. These politicians are severely ignorant to the prejudice and danger they are putting on women everywhere.

Even if on the off chance that Gov. Greg Abbot could in-fact eliminate such criminals, the only way to identify these crimes is after the victims have suffered, died and/or lost access or affordability of healthcare carrying a rapist’s fetus to term. In no way is this counterargument a reasonable defense to withold expceptions set in place for rape or incest on a law aimed against women’s bodies.

Such a bill also disproportionately affects women and children of color, who, due to the largely overpowering role of white supremacy and systemic racism in today’s world, already have inadequate access to healthcare and affordable abortion care.

It is obvious to anyone that TXSB8 is not going to end abortions, it will only prevent women from getting them safely. The state of Texas would rather issue this “heartbeat” bill that will result in more deaths due to illegal, ‘DIY,’ unsanitary and unprofessional abortions rather than providing safe and legal reproductive healthcare. Is this truly the kind of world that we have become?

A large portion of women who have abortions are already living below the poverty line, and the innumerable underlying effects of this bill will only increase the amount of unwanted pregnancies. This can create harmful financial effects, such as unemployment or homelessness.

With these unethical and overly conservtive laws set in place, women’s reproductive rights have been set back nearly 50 years in the making. This bill completely disregards the several decades of fighting to keep what should be our basic right to healthcare.

As the strictest abortion ban in the country, this “pro-life” propaganda does not benefit anyone besides Gov. Greg Abbott himself, trying to gain the likings of men who survive and thrive on controlling women’s bodies and rights. When will women’s reproductive rights finally be placed in the hands of women instead of the hands of bigoted men who do not even have a uterus?