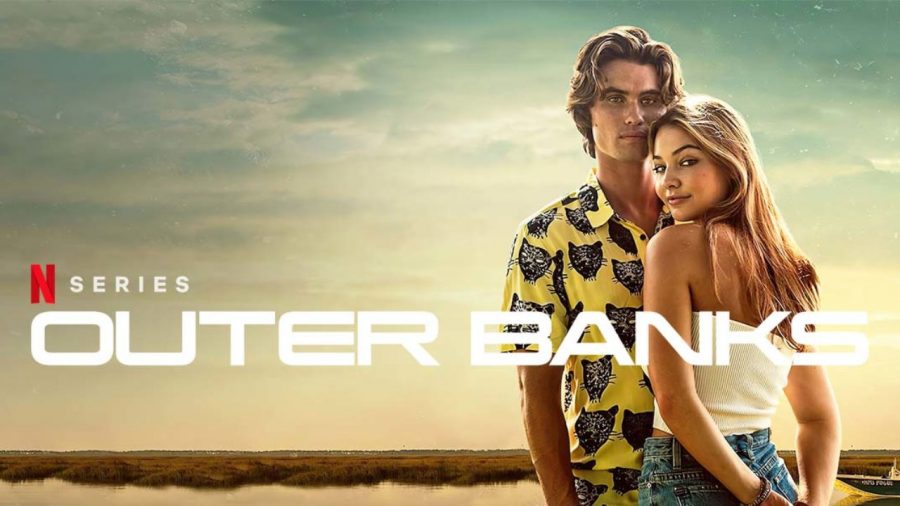 Characters John B. and Sarah Cameron are resurrected in season two of Netflix's "Outer Banks." The new season premiered on July 30. Photo courtesy of Netflix

“Outer Banks” is a television series based on the story of John Booker Routledge (Chase Stokes), an orphan who lost his father at sea. After finding a compass on a sunken ship which happens to belong to his father, John B and his friends go on a quest with a hunch that the compass could be a clue to his fathers disappearance.

The search for answers about John B’s dead father leads him and his friends, Kiara (Madison Bailey), JJ (Rudy Pankow) and Pope (Johnathan Daviss also known as J.D), to continue his father’s mission to find the Royal Merchant. The Royal Merchant is a famous shipwreck that had carried $400 million in gold and was recently known to carry the Cross of Santo Domingo. It was also known that the only survivor was Denmark Tanny who is often referenced because of his connection to the Royal Merchant.

John B’s character encounters several hardships which shape his personality. As carefree as he is, he tends to bend the line between realistic and impossible. He begins to be reckless with his life as the gold is within his grasp.

His choices force Sarah to consider dangerous alternatives and solutions. She pushes her boundaries for the boy she loves, but this love seems to bring more distress than solutions.

Season one ends with Sarah Cameron (Madelyne Cline), love interest to John B and daughter of Ward Cameron, and John B stranded in the middle of the ocean.

The second season begins with Sarah and John B using their only melted bar of gold to signal a boat, while their presumed death tears their friends and family apart.

JJ is a comedic relief as he plans crazy schemes to save his friends. When John B is put in prison after being spotted on the deck above the S.S Pogue with Sarah, JJ takes it upon himself to break John B out. When he first visits John B, he tells him to pose as having stomach pains and rubs a bar of white soap on his face to make him appear pale. After convincing the guards that John B is suffering from appendicitis, they will call for an ambulance which is when JJ will respond to the call and rush him away.

Of course though his plan doesn’t go as articulated and he finds himself in the back of the ambulance helping a cancer patient while a cop drives the van. However, being JJ he escapes the cops grasp. He is entertaining to watch, his tough exterior being a complete contrast to his love for the people he cares about.

A container ship rescues the two lovers and they head to Nassua, Bahamas with several obstacles along the way. Their presumed death is short, but the pressure to clear John B’s name after he gets charged for the murder of Sheriff Peterkin, is pressing.

As Sarah and John B’s tension increases Pope, Kiara, and JJ face their own obstacles. Kiara’s persona turns bratty and selfish as her mother pushes her away from the pogues. Pope’s feelings for Kiara intensify and his attraction makes him clingy and unsure of himself.

Kiara and Pope’s relationship ranges from lovable to toxic. Pope’s feelings for Kiara are not reciprocated and can be noticed throughout their conversations and interactions. Kiara tends to string him along and cause him pain in the process.

As the journey for the gold and pressure to clear John B’s name intensifies a connection is made between Pope and Denmark Tanny. This connection spices the plot making it more emotional and personal.

John B, despised by the privileged, has all eyes on him as his trial for the death of Sheriff Peterkin quickly approaches. Meanwhile, drama within the group rises and Rafe is spiraling out of control. His need to control the situation interferes with his love of money and violence rather than the truth.

Ward becomes painful to watch as he puts his desires and greed before his daughter. His obsession with retrieving the gold, and obtaining the cross to pay off his debts in his company clouds his judgement. As Sarah rebels against her father he pledges his loyalty to his son and believes they are better off without her.

Season one is where the journey begins, a forbidden love between a kook and a pogue starts and her position with her father leaves her a loose end. The gold ends up in the wrong hands and presumed deaths leave the group heartbroken. The season did attract attention however the second season contains many surprising connections that put season one to shame.

The final scene of the second season left a baffled expression and mind, as the unexpected in this show is the bare minimum. Pope becomes a person of interest in the second season replacing John B. Sarah’s position with her family creates drama and tension that keeps the watcher in suspense.

All in all, this second season of “Outer Banks” leaves you with whiplash and will give more questions than answers. It is implausible and incredibly well thought out. Scenes move fast with one obstacle after the next for every character. I would definitely call “Outer Banks” season two a must watch on Netflix.