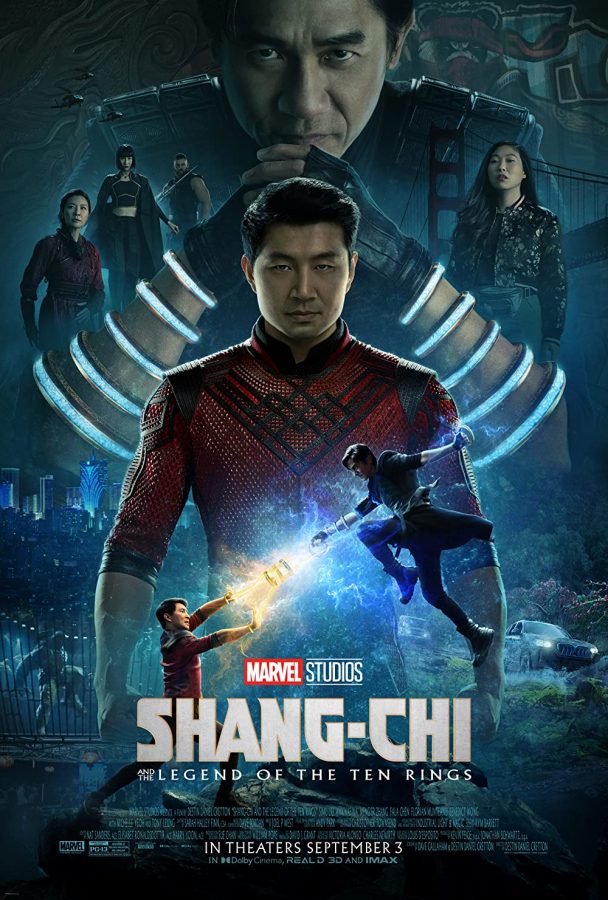 Since the complete trailer for “Shang-Chi and the Legend of the Ten Rings” was uploaded on Thursday, June 24, 2021, Marvel fans have been anticipating its release. This new addition to the Marvel Cinematic Universe (MCU) movie franchise was initially set to be airing in theaters by July 2020, however, due to the ongoing COVID-19 pandemic, the production of the movie was delayed twice. Shang-Chi was finally released exclusively in theaters on Sept. 3, 2021.

“Shang-Chi and the Legend of the Ten Rings” is not only a great addition to the Marvel cinematic universe, but also a big step toward more racial inclusivity in large media productions. The main character, Xu Shang-Chi, is played by Simu Liu, the first Asian American superhero to get a solo film in the MCU.

The movie begins by introducing Shang-Chi as Shaun, a “normal” valet driver living in San Francisco who works alongside his best friend, Katy, portrayed by Awkwafina.

On a bus ride to his job, Shang-Chi is threatened by mysterious and magically armed men. This forces Shaun to reveal his intense martial arts training he had kept a secret since moving to America, to protect Katy and the other passengers on the bus. The assailants steal a pendant that was given to Shang-Chi by his late mother which leads him to believe that they will go after his sister, Xu Xialing, played by Meng’er Zhang, as well because she was also gifted a similar pendant.

The main antagonist in this film is Shang-Chi and Xialing’s father, Xu Wenwu who is played by Tony Leung Chiu-wai. When Shang-Chi travels to China to find his sister, he discovers that he must face the difficult past that he thought he left behind in China with his father.

The movie centers around the strained father and son bond between Shang-Chi and Wenwu. This strain was caused by the death of Shang-Chi’s mother, as well as his father’s obsession with the Ten Rings organization, one of most dangerous organizations in the MCU that captured Tony Stark in the first Iron Man movie and has been led by Wenwu since the middle ages.

The flashback scenes from Shang-Chi’s childhood make the storytelling much more intriguing as each scene reveals bits and pieces about Shang-Chi’s past. This added a lot of depth to Shang-Chi’s emotions about his fractured family after his mother’s death and how his father’s training affected him growing up.

“Shang-Chi and the Legend of Ten Rings” also contains many excellently choreographed action sequences that keep viewers at the edge of their seats because of the amazing cinematography and creatures capturing them. The martial arts aspect of this movie was also something I looked forward to and I was not disappointed.

Additionally, Katy and Shang-Chi’s friendship adds a humorous aspect to the action-filled film.
Awkwafina does a great job in portraying Katy as a side character to Shang-Chi, as well as giving her a story about finding her own path in life, which is something many viewers of the film can relate to and appreciate.

Overall, “Shang-Chi and the Legend of the Ten Rings” beautifully illustrates Shang-Chi’s journey through grief, anger and finally, confronting his past. Marvel fans are excited to see this debut superhero in upcoming Avengers films.