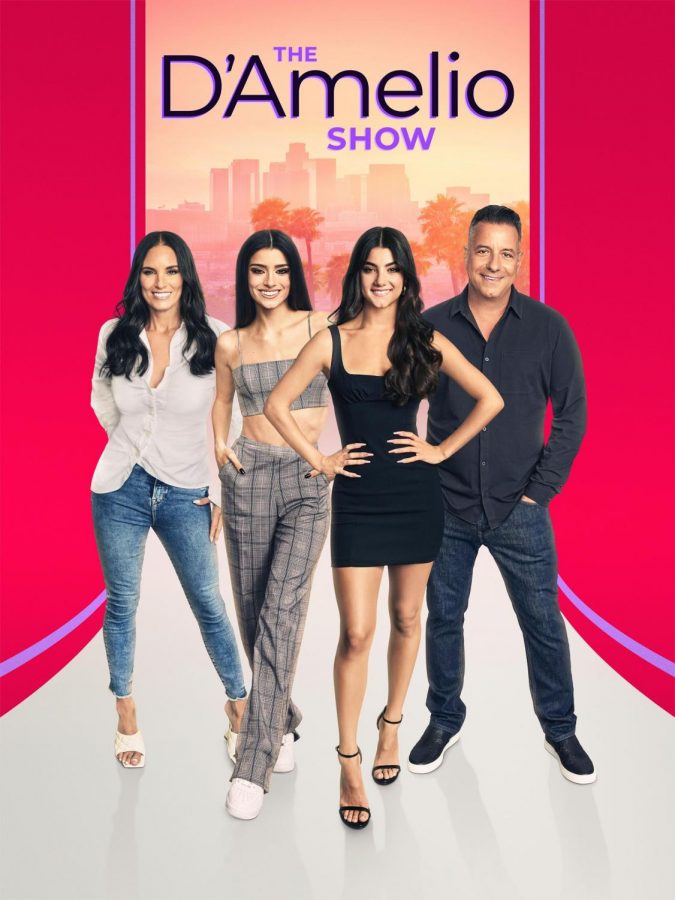 On Friday, Sept. 3, the streaming service Hulu introduced a new original TV series to their Platform: The D’Amelio Show. The D’Amelio Show stars internet sensation Charli D’Amelio, along with her sister Dixie D’Amelio, and their parents Hedi and Marc D’Amelio.

17-year-old Charli D’Amelio grew up in Norwalk, Connecticut and has danced her whole life. After posting a dance video on the app TikTok, she quickly gained a large following, which led to her and her family moving to Los Angeles, CA to pursue job opportunities.

TikTok is a video sharing social media site that allows you to post 15 second to three minute videos that usually feature dances made by creators on the app. The app is a quick way to gain a following, enabling many of its users to go viral, like Charli did, causing several people to refer to her as an “accidental influencer.”

This show highlights the challenges and changes their family has faced while adapting to the influencer lifestyle. It features their day-to-day life after moving from Connecticut to Los Angeles.

In this show, the D’Amelio sisters share their mental health struggles. This aspect was very important for them to share, as their lives are actually nothing like they seem online. Fans are only seeing a 15 second dance video, which does not accurately portray a creator’s true feelings. Charli and Dixie showing their struggles helps people realize they are not alone, as well as showing haters how their negative comments affect them in their daily lives.

In episode one: “Charli D’Amelio? What the Heck?” The family introduces themselves and shares how they are trying to maintain a “normal” life despite being in the spotlight 24/7. The most special part about this family is that they do everything together. With Charli growing famous at such a young age, she was unable to move out to California on her own, like most creators.

This show really introduced fans and viewers to something we aren’t used to. We actually saw Charli and Dixie go through so many changes in their life and how they struggled to the point they felt like they couldn’t handle the stress anymore.

Usually on social media we only see the sugar coated things and not the real depiction of how the influencer is truly feeling. Now with this show, the family really was not shy with having the cameras out even during their breakdowns. It is very apparent why a family would not want followers to see these vulnerable moments, but I think it was important that the D’Amelio’s continued to film even during their lowest points.

It shows people who may think their hate comments do not affect creators that it really does. It also teaches Charli’s young followers that it costs nothing to just be nice because even if they have millions of followers; it shows influencers are still human.

Seeing episodes one through eight was almost like a timeline of Charli and Dixie’s mental health progressions. The family shared things that they did to help the girls take time off to improve their mental health and appointments with specialized doctors helping them handle the hate.

Not only could their fans benefit from seeing things they did to improve their mental health to use for themselves, but it also shows other influencers who may be struggling that it is okay to feel this way and it is still important to take care of yourself.

In episode eight, The last episode of the series, “Here’s to 17!” The family gets ready for Charli’s 17th birthday and Dixie confidently releases her new song to the world. Although Dixie, being older,was able to take time to improve herself before Charli did, you could definitely see progress in both of the sisters’ well-being by this episode.

Most of the episodes showed them working on their line “Social Tourist” which is a clothing line they are creating with Holister. It was definitely interesting to see a timeline of the brand coming together. That is something you don’t usually see when just watching a Tik Tok of the family. It was interesting to see more of the work side of their job as an influencer because even as Charli stated in the show, most influencers can’t necessarily talk about things they are working on until they are done.

This was such an inspiring show to watch, seeing the progression in the girls’ mental health and how they go from struggling and feeling hopeless to finding happiness and joy in their new life in the spotlight.

It goes to show how nothing on the internet is as it seems. A 15 second video does not realistically portray Charli and Dixie’s life and the way one mean comment affects them.

This show surprised me and I enjoyed all of the episodes. I felt as though I was feeling the different emotions along with the family. I would have never called myself a fan of the D’Amelio family until I watched this show. This series has caused my whole perspective to flip, and I encourage everyone to watch it.