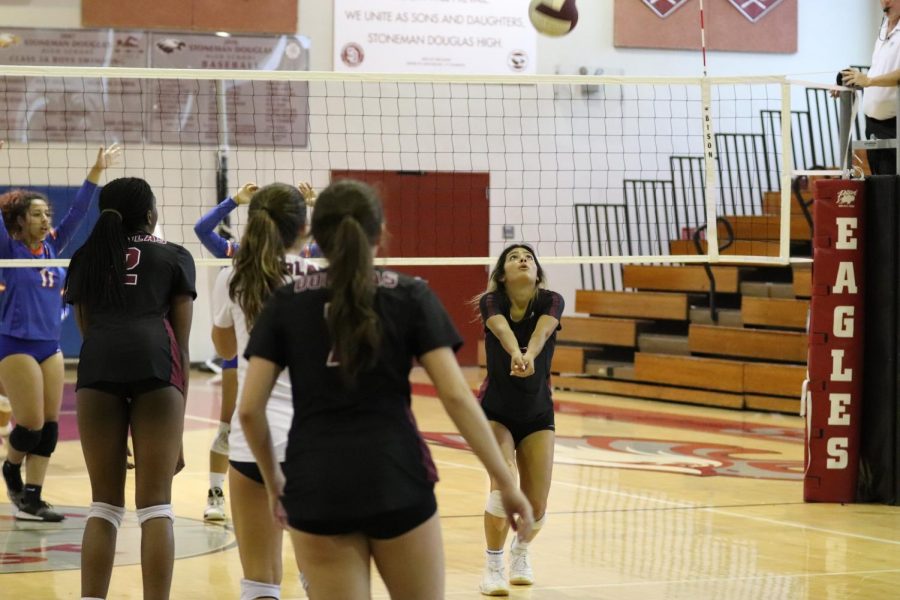 Junior Isabel Gonzalez sets up the ball for her fellow teammates to slam against the Hollywood Hills Spartans. The Eagles ended up winning the match 3-0.

Entering into the game, the Eagles held a 1-2 record. However, the Spartans had a superior ratio, as they held a 4-2 record. This suggested that it was going to be a difficult game for the Lady Eagles.

The Eagles dropped their two games on the road against Cooper City High School and Pembroke Pines Charter, but they won their most recent matchup, the home opener, against Coral Springs High School.

Nevertheless, the Eagles remained determined, as their current status was due to a late start to their season.

“I think the team is doing really well for having a late start. I think we’re finally starting to get into a groove and become one as a team,” sophomore Camilla Mercer (15) said.

The game began and the Spartans took an early 1-0 lead with an unforced error by the Eagles. After starting the game down 4-0, the Eagles made a comeback and took their first lead with a score of 7-5 from a spike by senior Giselle Hansen (6).

The Eagles maintained their lead with a score of 9-8 after an error by the Spartans. MSD did not back down and took a commanding lead of 21-14 with an impressive performance by senior Jillian Carrol (7), Mercer and Hansen.

Despite the crowd being fully in the Eagle’s momentum, the Spartans made some late set magic and tied the game at 23 a piece. Even so, the Eagles won the next two points and won the first set.

After a very intense first set, the second set went by much quicker. It started with a fantastic serve from junior Kierra Murphy (2), allowing the Eagles to take an early 1-0 lead.

The Spartans rallied and won the next two points. Their efforts would be in vain, as the Eagles won the next 10 points in a row. These points were contributed through great communication, serves, spikes and saves.

“I think we did the best on communication today,” Hansen said. “We definitely struggled on it in the beginning, but we got it together in the end.”

The Eagles took a dominant lead with a score of 20-9, and a blowout victory was right around the corner.

A couple of points later, with a score of 24-10 , the Eagles hit a fantastic serve and won the second set.

The Eagles’ momentum died down as the Spartans took an early two point lead in the third set with a score of 6-4. The Eagles did not stay down for two long though, as some great spikes took them to an 11-8 lead.

“I think today, we did the best at our passing, setting, hitting and getting a good kill on the ball,” Mercer said.

Throughout the third set, both teams had a number of streaks with a couple of points won in a row. On match point for the Eagles with a score of 24-18, the Spartans ended up missing and MSD took home the victory with a final score of 25-18.