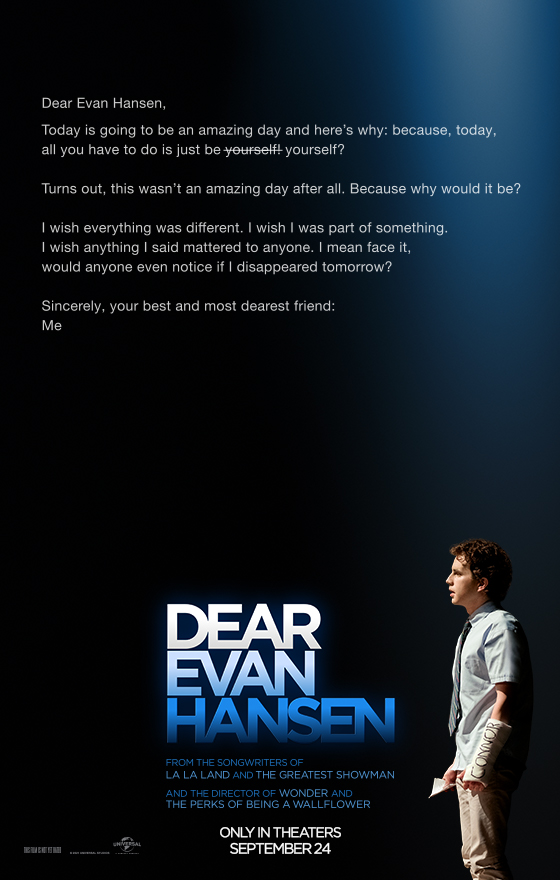 The much anticipated film adaptation of "Dear Evan Hansen" has been released. Poster courtesy of Universal Pictures

The highly anticipated movie adaptation of the Broadway play “Dear Evan Hansen” came out on Friday, Sept. 24, 2021. Reviews by critics and fans were posted quickly after the release.

The coming-of-age musical stars Ben Platt, who played the original Evan Hansen on Broadway. He made the role famous and ultimately was chosen by director Stephen Chbosky to continue playing the character.

The movie opens up with the widely popular song “Waving Through A Window,” as Evan, a senior in high school with social-anxiety disorder and depression, is getting ready for school. As he goes through his morning routine, Evan takes multiple forms of medication for his anxiety disorder. Evan’s mother, played by Academy Award winning actress Julianne Moore, encourages him to follow his therapist’s advice to write encouraging letters to himself every day.

The movie centers around a letter Evan wrote to himself, following his therapist’s assignment, that got into the hands of Connor Murphy, played by Colton Ryan. Connor is the brother of Evan’s secret crush, Zoe, played by Kaitlyn Denver.

The letter was found in Connor’s pocket after he committed suicide. This caused Connor’s parents, played by Amy Adams and Danny Piro, to believe that Evan was Connor’s best and only friend, since the letter begins with “Dear Evan Hansen.”

Evan finds himself in a predicament as he lies to the Murphys, going along with the narrative they have created of him and Connor’s friendship. Evan and his family-friend Jared compose fake emails between Evan and Connor to make their fake friendship more convincing. In these emails are fabricated stories about the boys that Evan shares with the Murphys to give them more background on their son.

Connor was very closed-off and did not have a good relationship with his family. The Murphys relied on Evan to tell them about the “true” Connor demonstrated through his “friendship.” Evan is given a sense of belonging and becomes more known at school as the best friend of the kid who committed suicide.

Evan even helps start a fundraiser to repair an apple orchard that Connor frequently visited. However, his lies eventually catch up to him and his relationship with the Murphys’ and his friends fall apart.

This movie has many representations of living in a social media-age and how mental health affects teenagers. Self-discovery is one of the main themes and Evan is a prime example of a teen navigating their way through high school and tragedy.

The highlights of the movie were the song and dance numbers, including my personal favorites,“Sincerely Me” and “You Will Be Found.” “Sincerely Me,” sung by Ben Platt, Nik Dodani and Colton Ryan, is a high-energy song that provides comical relief. The most emotional number of the film “You Will Be Found” touches the audience by acknowledging that they are not alone.

However, Ben Platt has seemingly outgrown the part. Platt first played Evan Hansen when he was 23. The play came out in Dec. 2016 , making Platt 28-years-old to date. It is difficult as an audience member to see him play a teenager, when he clearly did not look like one.

Platt, although aged beyond high school, gave an amazing performance and was consistent in bringing out all the emotions that an anxiety-ridden teenager goes through. His prior experience in playing Hansen got him the role and he did not disappoint.

Overall, “Dear Evan Hansen” lived up to its Broadway excellence, successfully illustrating how living in a social media-age and mental disorder era affects teenagers. The movie can help people who have been in similar situations, whether it’s dealing with grief, anxiety or suicidal thoughts.