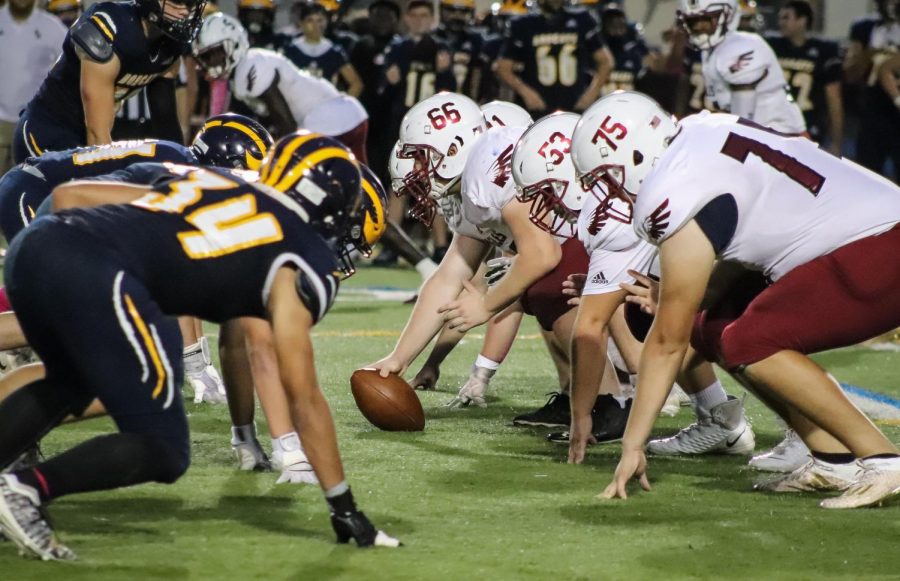 In the beginning of the second quarter, MSD players went head-to-head with the Boca Bobcats. The Eagles had possession of the ball.

Both teams were looking to keep their successful records, with the Eagles entering the game with a 2-1 record and the Bobcats with a 3-1 record.

The Eagles were entering this game with the absence of their quarterback Ryan Spallina (15). Spallina injured his right shoulder during their previous game against the Deerfield Beach Bucs. Hunter Rose (11) filled in for Spallina as the team’s temporary starting quarterback.

The game began, and the Eagles started with the ball. During the second play of the game, running back Matthew Wilson (4) ran the ball 49 yards down to the Boca 26-yard line. This led to an early lead of 3-0 for the Eagles, after a 25-yard field goal by Robbie Alhadeff (88). However, it went downhill from there.

“We did not play a very good game, but we had a very good run game,” wide receiver Hervin Louis (5) said.

When the Bobcats got the ball, their opening possession went very fast. Bobcats’ player Trey Rainey (2) ran through the Eagles’ defense and scored right away.

The play after involved Rose, who broke off a few tackles for a first down and threw an interception. The play preceding the pick led to another touchdown by Rainey, giving the Bobcats a 14-3 lead.

The punt following three plays for negative yards for the Eagles went over Alhadeff’s head and through the end zone for Bobcats’ safety. The score then was 16-3, Bobcats with the lead.

The first quarter ended after a five-yard run by Wilson, but the Eagles were down 16-3. A long possession for the Bobcats, following another three and out for the Eagles, turned into a two-yard run for a score by Bobcats’ quarterback Jacob Cashion (14), taking a 23-3 lead.

“I need to be more efficient and make more plays,” sophomore defensive lineman Ryan Cruz (78) said. “I can improve by getting faster and improving my technique, training harder and learning new moves.”

After a poor kickoff, the Eagles started their possession with the ball on the Boca 48-yard line. The first snap of the drive went over Rose’s head and destroyed the potential of getting back into the game. Wide receiver Collin Bender (11) dove out to catch the ball, allowing the Bobcats to score again for a 30-3 lead.The first half ended on a bad note for the Eagles.

Following halftime, the second half started off slow with an interception by Rose, three and outs and a turnover on downs by both teams. The score remained at 30-3 Bobcats after the third quarter.

However, the blowout did not dissolve yet, as the Bobcats drove the ball down the field after a trick play. They ended the scoring with a touchdown and two-point conversion grab by Bobcats’ receiver Sebastien Saint-Louis (88).

The following possession turned into another bad snap into the endzone on a punt. The game ended with a 40-3 Bobcats victory.

“We can improve mentally, it was a very mental game,” Louis said.

This game will light a fire under the Eagles for their next matchup on the road on Oct. 8 against Monarch High School.