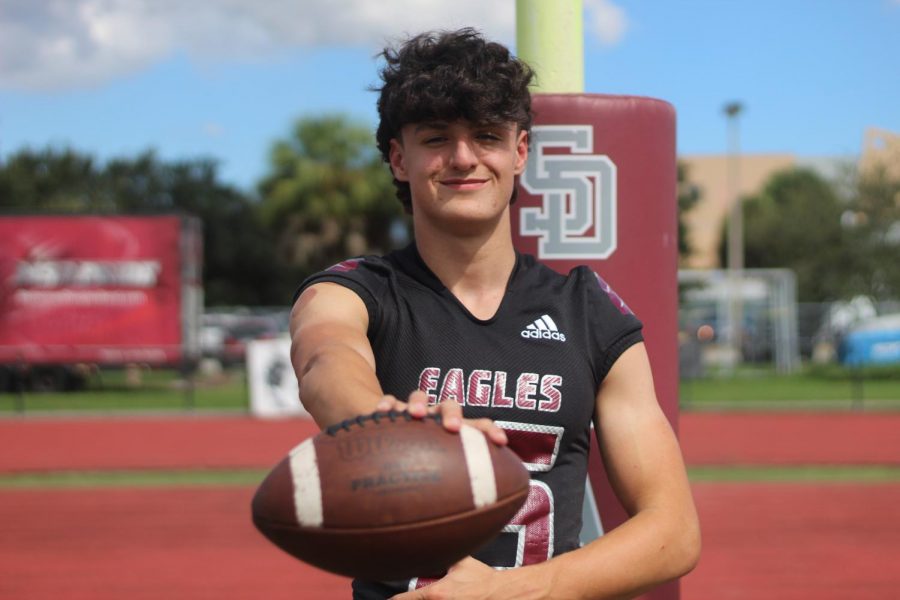 Hands out getting ready to receive the football, Marjory Stoneman Douglas High School sophomore Ryan Spallina gets the ball hiked to him and throws it across the field.

Ryan Spallina (15) is the quarterback for the MSD varsity football team. He was born and raised in Parkland, Florida.

Spallina’s dad first got him into football at four years old, where he played football for the Parkland Rangers for seven years.

After his travel football career, Spallina made it onto the MSD varsity football team his freshman year. He was a backup to alumnus Matthew O’Dowd for last year’s playoffs. This paid off when he earned the position of quarterback and a leading passer for the Eagles his sophomore year.

“I just recently was the state’s leading passer and that is my biggest achievement so far, with hopefully many more to come,” Spallina said.

Making it onto varsity Spallina’s sophomore year was a huge accomplishment for his athletic career. Not only has he improved his athletic skills for the future, but he has learned valuable life lessons and formed several life-long friendships along the way.

Teammates of Spallina see him as a leader for the underclassmen, paving the way for all of the younger students on the varsity team.

“[Spallina] pushes us no matter what. In practice, he doesn’t let us take one rep for granted. All of the underclassmen understand their spot on the depth chart can easily be taken by them and Ryan helps us improve our spot on the depth chart,” sophomore Brite Cannon (15) said. “If he sees me run the wrong route or if he feels like I’m not where I’m supposed to be, he will look at me and call me out on my mistake and tell me how to fix it for the next rep. Ryan is everything I would want in a leader.”

When he’s not playing at a game, Spallina practices by mostly working on footwork, reading defensive coverages and perfecting his throwing motion. However, during these practices, Spallina still took the proper precautions to prevent the spread of COVID-19.

“COVID-19 has impacted football for me and my teammates. We take many more precautions than ever. We wear a mask whenever we are inside a room together,” Spallina said. “When I was a freshman, I saw COVID-19 take away our season right before our playoff game, which was heartbreaking for the seniors.”

Furthermore, COVID-19 has not stopped Spallina from continuing to be a two-sport player. When football season ends, he moves onto lacrosse, which he has been playing for 10 years. Playing two sports has helped him excell in both his academic and athletic career.

Unfortunately, on Friday, Sept. 17, at the homecoming game, Spallina got hit by a football, which tore his Labrum. He is getting surgery to fix his shoulder; however, this injury will put him out for the rest of the season.

After Spallina graduates from MSD, he hopes to play Division 1 at his top college choice, the University of Florida.