​​[Opinion] The way that the U.S. Border Patrol Agents handle surges of migrants is inhumane and must change immediately 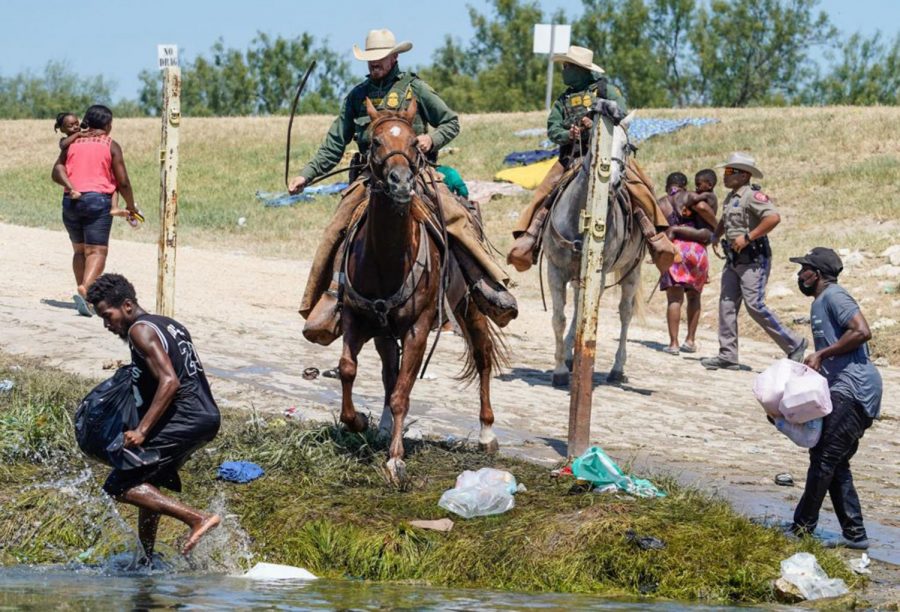 United States Border Patrol agents on horseback try to stop Haitian migrants from entering an encampment on the banks of the Rio Grande near the Acuna Del Rio International Bridge in Del Rio, Texas on September 19, 2021.

On Sunday, Sept. 19, 2021, disturbing photos and videos surfaced on the internet of the United States Border Patrol agents on horsebacks at the banks of the Rio Grande. They were pictured charging aggressively at Haitian migrants, while cursing and swinging reins. This attempt to drive away immigrants included families and individuals. One picture even demonstrates a patrol agent on horseback grabbing a man by the collar of his shirt and yanking him backwards.

This footage sparked immense backlash from viewers all over the country, who found the treatment of these migrant families to be disturbing and inhumane. As a result, U.S. President Joe Biden’s administration announced in a press brief, that they will ban Border Patrol agents from using horses in Del Rio, Texas. However, this is not sufficient in the larger scope of Border Patrol brutality throughout U.S. history.

Unfortunately, the mistreatment of migrants is far from an isolated incident. Instead, this event only reflects larger systemic issues within Border Patrol that provokes brutality and the dehumanization of immigrants, such as assimilation and unequal job opportunities.

This abuse stems from a long record of nationalist and xenophobic feelings in the U.S. Among the first members of the U.S. Border Patrol of 1924, were active members of Ku Klux Klan, a hate group directed against Blacks, Muslims, Jews, Catholics and other minorities. This cultural racism within the Border Patrol has persisted throughout its history, with agents continually being reported using racial slurs in the face of migrants.

To add insult to injury, the Border Patrol has clearly displayed that they do not have any sympathy towards these occurrences by lowering their hiring standards in order to gain more employees. This has led to an influx of unqualified agents, perpetuating violence through lack of efficient training and apathetic attitudes.

This abuse goes beyond just the border though. According to the American Civil Liberties Union, “Many of the Immigration and Customs Enforcement’s (ICE) removal tactics take away even the right to a fair hearing in court, as the government rushes to judgment and tries to ram people through a rubber-stamp system that ignores individual circumstances.” These tactics strip migrants of the Fourth Amendment’s protection against unreasonable searches and seizures, the right to due process and the guarantee of equal protection.

Agents of the Border Patrol are infamous for abuses of power, such as using excessive force, detaining people under unlivable conditions and using misinformation as grounds for deportation.

According to the Washington Office on Latin America, between March and August of 2020, 8,800 children and infants, as young as eight months old, were taken, unaccompanied by an adult and deported back to their home countries alone.

In addition to this, Border Patrol has not taken any actions toward ensuring that these children were returned home safely. Instead, some of the children were even placed in hotel warehouses, while waiting to be deported.

The extensive abuse of power displayed by the U.S. Border Patrol is unacceptable, and frankly sickening. It only takes being human to recognize that this culture of extreme racism and nationalism within the Border Patrol must end immediately.