The top ten most popular movies and shows on Netflix 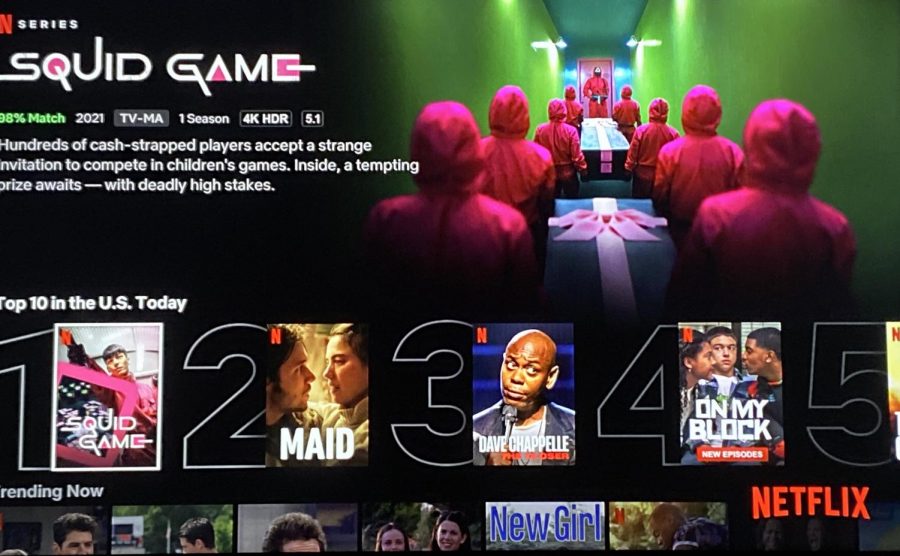 Numerous teenagers and adults use the popular streaming service Netflix as a way to relax and as an activity to do when we are bored. The service offers both television shows and movies and includes a wide range of genres, such as comedy, action and romance. Individuals of any age can always find something to watch on the streaming service, as the platform has thousands of options.

The Netflix top 10 list is a way to see what is trending in the United States every day. This data is based on the daily streaming amounts of movies and TV shows. Viewers should check out the top 10 list if they need recommendations for something to watch. Each movie or show on the list displays a percentage that shows how much of a match the content is compared to one’s previous watching habits.

10. Cocomelon
“Cocomelon” is number ten. The show, which is on its third season, is geared to young children. The program keeps kids entertained while learning at the same time. Kids will be able to learn letters and numbers with nursery rhymes and fun songs. Even parents can enjoy its catchy tunes.

9. The Five Juanas
“The Five Juanas” takes the ninth spot. So far, the program only has one season and it showcases just how small the world really is. The plot revolves around a group of women who all met at a hotel in Cancun not for any specific reason, but all come to a startling revelation: each woman has an oddly similar birthmark on their butt which leads them to think that they are all related to each other. An additional plot twist: they all have the same name.

8. Midnight Mass
“Midnight Mass” is number eight. This is a mysterious and spooky limited series with seven episodes that displays a strange connection between the real world and the supernatural world. When a charismatic young priest, played by Hamish Linklater, shows up to his new town, Crockett Island, things start to happen.

7. Titanic
“Titanic” is also trending. Even though this movie was released back in 1997, its influence on audiences today is still strong. This movie showcases the Titanic, the notorious ship that took many lives after colliding with an iceberg. Starring Leonardo DiCaprio, who plays Jack Dawson, and Kate Winslet, who plays Rose DeWitt Bukater, their love story takes over the film’s tragedy, making this not only a movie about the deadly ship, but also a chilling love story.

6. There is Someone in Your House
“There is someone in your house” is sixth on the list. It is about Makani Young, played by Sydney Young, who moves from Hawaii to live with her grandmother in a small town in Nebraska to finish high school. Makani and her friends must stop a strange killer from exposing all of their darkest secrets days before graduation.

5. The Guilty
“The Guilty” is fifth. This film is about a police officer who is assigned to be a 911 operator who scrambles to save a distressed caller. When he finds out about different calls that he gets, he is very vague and he is not well liked. When he gets the call of the woman in distress, he tries to help but makes a lot of mistakes.

4. On My Block
“On My Block” took the fourth spot. It’s back for its fourth and last season after two years. This has been a long awaited show for many watchers. It follows four teens finding their way through school life, who have further been through many obstacles. Topics, such as violence and death can be found throughout the seasons, with a close-family relationship dynamic as well.

2. Maid
“Maid” is second on the list today. This is a limited series with 10 episodes. This show is about a mother who flees after being in an abusive relationship. She fights to take care of her child and for them to have a better future while they live below the poverty line.

1. Squid Game
“Squid Game” takes first place. This show has one season with nine episodes. This show is about hundreds of cash-strapped players who are playing different types of children’s games to win 45 billion South Korean won. There can only be one winner to claim the prize at the end. It’s about a man who is in debt and decides to play a game to win the prize money to support his family, especially his daughter. The individuals who agreed to take part of the game were given an undisclosed location to meet up and soon realize the extreme nature to these “games.”

Overall, Netflix has a wide range of movies and shows, ensuring that viewers of all ages have something to watch. If you are unsure about what you want to watch, consider looking at the Netflix top 10 list to find something that many others have enjoyed.