Men’s varsity golf progresses through their successful season after suffering close loss to No. 1 ranked Spanish River to end their undefeated record 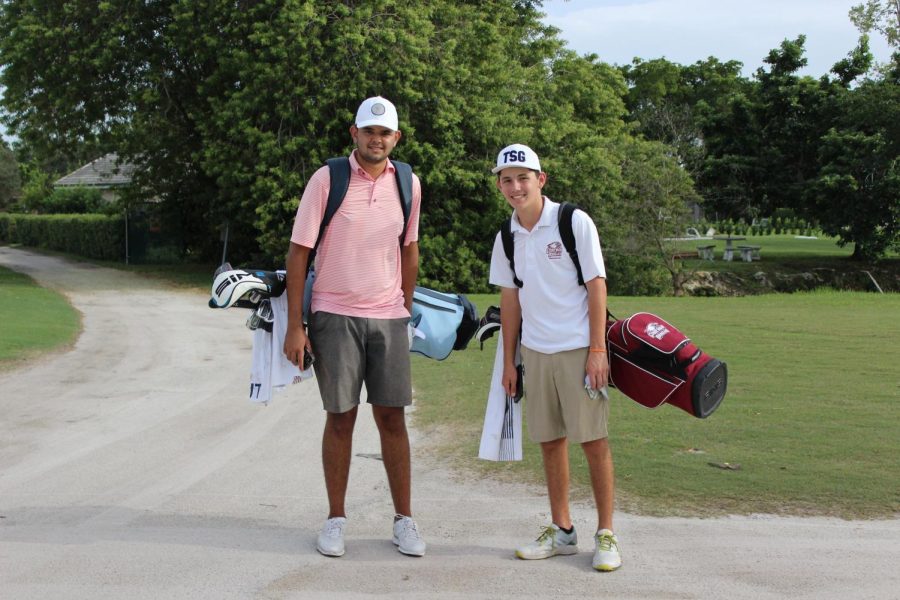 Starting off the season strong. Devan Chahal and Dylan Marrone pose for a picture when walking between holes during a match.

On September 28, the Marjory Stoneman Douglas High School Men’s Golf Team had a tough match at the Country Club of Coral Springs against Spanish River, the number one team in the state according to the FHSAA.

Heading into the match, MSD had momentum going in their favor with a 4-0 record to begin the season; Spanish River, who had a later start, had a 2-0 record.

With the help of star players junior T.J. Thompson and senior Devan Chahal both scoring one over par, it gave MSD a chance against their hardest matchup of the year.

Additionally, senior Andres Barraza contributed towards the close score by shooting +1 throughout the nine holes. However, he believes that the team, himself included, had a shot at dethroning the No. 1 ranked team in the state.

“I left a couple of shots out there, but avoided big numbers. Even though it wasn’t my best, I stuck through the match,” Barraza said.

Sophomore Ryan Shimony was another contributor towards the Eagles competitiveness, scoring a +2 in the round. Much like the rest of his teammates, Shimony believes that the team was extremely close to beating Spanish River, and that fixing a few aspects of their game could have resulted in a victorious outcome.

“I had a rough start, but came back in the end,” Shimony said. “I hit almost every green, but if I was in prime position on every hole then I could have shot a little better.”

Although the Eagles made the match close, Dean Greyserman of Spanish River was one of many great showings, hitting one under par and served as a main piece in leading his team to the victory.

In the team’s hardest matchup of the year, Douglas suffered a close 141-147 loss.

The Eagles learned from their mistakes during the match and used them to their advantage as they progressed towards several other matches, including the BCAA tournament on Oct. 11 in which the team played extremely well, shooting a total of 282 strokes in a round of 18 with only four of their players.

“We’re hoping Districts and Regionals are high points [of the season]. Winning BCAA was also something I am very proud of. 282 for four golfers in 18 holes is a very nice round,” Coach Ernest Rospierski said.

With the hardest match of the season out of the way in Spanish River, the Eagles look towards their District Playoffs on Oct. 26 with high hopes.