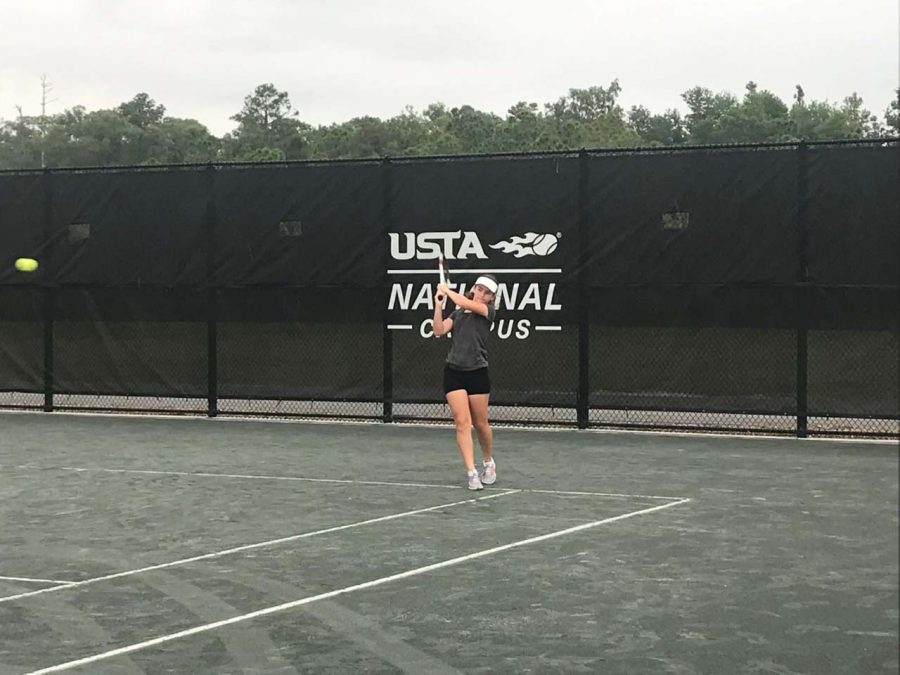 In Action. Heide Dumke is a strategic and hard to beat tennis player. She is excited for the tennis season at Douglas.

“My dad always, when he was young, he always took three balls and went to go play against a wall at a club close to his neighborhood, and he really really liked the sport, but he couldn’t go into tournaments himself,” Marjory Stoneman Douglas High School freshman Heidi Dumke said. “So then, he passed down the sport to me and my sisters and we really fell in love with it and now we do tennis before and after school.”

Dumke has always had a knack for tennis, developing a passion and proficiency for the sport at an early age. Her long hours of practice have gained her a ranking of 78 in the Florida junior ranking system and a Universal Tennis Ranking (UTR) of five (the average ranking of most college players), accomplishments that speak to her skill at the young age of 14.

Dumke’s earliest memory of tennis occurs in Glen Ridge, New Jersey. Dumke, about age four, and her family were playing at a park when her father took them to some nearby tennis courts for a casual game. It is at this very moment that Dumke’s love for tennis began.

“[My dad] just went to introduce us for fun for the first time, and that’s when I really, with me and my older sister Tanya, that’s when we really connected in the sport,” Dumke said.

Dumke’s strong familial connection to tennis has resulted in a healthy love for the sport. Her father always emphasizes that at the end of the day, the sport is supposed to be fun. Dumke plays tennis because of her own individual passion for the game, not because she was forced or born into the court. However, not everyone that plays at Dumke’s level is as fortunate.

“So many girls my age, for example at the tennis team here, you don’t have to go to Marjory Stoneman Douglas, cause so many girls my age who play this sport don’t go to school, because they’ve just completely engrossed their whole lives into tennis,” Dumke said. “Most girls in these junior tournaments and stuff like that, they decide their future when they’re like four years old; their parents put them on a course and that’s it.”

Dumke is a rarity in the sports playing community, somehow managing to hold great passion while also finding opportunities to thrive outside of tennis. She credits this incredible balance to the fact that she plays with family. So for her, tennis is fun rather than stressful.

“This is a serious sport and stuff, but we are here to have fun and there are other priorities too,” Dumke said. wisely.

Enjoying herself and acknowledging other opportunities is Dumke’s secret to her rare balance. Her family emphasizes the value of keeping an open mind, and allowing other interests outside of tennis to have their time.

“I love this sport, but my family is always so open,” Dumke said. “I think that’s so important to be open to all the possibilities in this world and all of your interests as opposed to just the sport.”

Dumke feels that being too invested in one activity without ever having the possibility to explore another, makes the activity that is so loved toxic and detrimental.

In addition to being a tennis player, Dumke is an excellent student that has shown signs of being a budding artist. Dumke takes digital video technology, taught by MSD career technology department head Eric Garner, and is working on developing her filmmaking and photography skills. Dumke also expresses a love for painting, utilizing her mother’s large art set to create masterpieces that will hopefully one day see the public eye.

We can all learn from Heidi Dumke’s story. She has managed to strike a balance between passion and personal interests that most of us, including those of us in our senior year, do not have. Hopefully we can all learn something from Dumke, but for now we wish her good luck in all of her future endeavors.