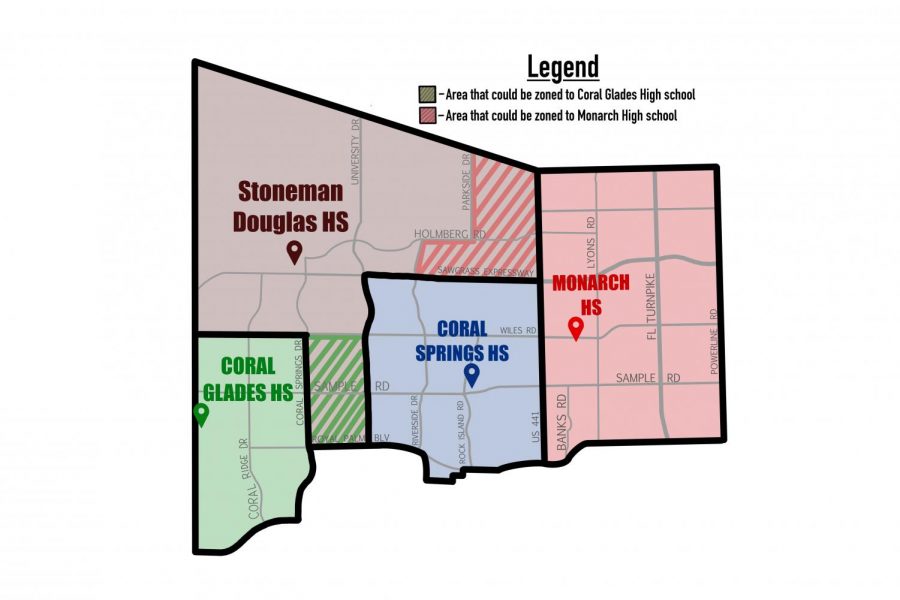 Mapping the Difference. When a school is overcrowded, one possible solution includes redrawing boundary lines. This map shows the current boundary lines for all the high schools in the Coral Springs/Parkland area. The shaded lines are areas that could potentially be considered for rezoning. There are no plans at this time to redraw the boundaries lines for MSD, which is a year-long process.

When a school reaches 100% capacity level, as dictated by the available space on the school’s FISH report, BCPS Policy 5000 illustrates the solutions the district can follow. For MSD, this will not happen until one of two situations occur to reveal our current capacity at 116%.

Either BCPS removes the 1200 building from MSD’s FISH report or the MSD community waits until the enrollment reaches 3,789 students.

Policy 5000 identifies, “[Re-]designating schools and school attendance zone boundaries for the ensuing school year(s),” as one possible solution to over enrollment.

With the current zoning and boundaries in place, the MSD zone extends north to Loxahatchee Road, also known as the Broward County border line with Palm Beach County, east to State Road 7 and south to Wiles Road. The southern boundary also includes a small section of area up to Royal Palm Boulevard between Coral Springs Drive and University Drive and west up to an uninhabited conservation area.

“These [rezoning] options may include changes to attendance areas/boundaries, but could also include a full-school address verification process to ensure students actually reside in the boundary,” Young said. “The designation of ‘overcrowded’ is based on the current year’s enrollment and the next year’s projected enrollment, rather than a past trend.”

With the area’s unusual shape, one possibility could include making Wiles Road the southern boundary. This would cut off Running Brook Hills, Broken Woods and several other neighborhoods located in Coral Springs, causing their assigned school to be Coral Glades High School rather than MSD.

Some of those neighborhoods already have the ability to choose to go to Coral Glades High School instead of MSD. In addition to changing the southern boundary, another possibility could be moving the eastern boundary westward, causing parts of East Parkland to be rezoned for Monarch High School.

“I think that [redrawing the boundary] is a great idea considering that in a few years, MSD’s population may only increase,” senior Jonathan Penn said. “This definitely should be done just for the overall safety of the students in today’s world and because there is not enough room to fit all these new students.”

However, the process to redraw the boundary of any section of the district takes a significant amount of time and often causes conflict within the community. The school boundary community review process typically takes 12 months, and kicks off with a school board workshop in May and completes with at least two public hearings in the following February-April to adopt the new attendance areas for all schools for the following school year.

“I feel like [redrawing the boundary] would be wrong in a sense. Many students have built special friendships and relationships at this school already. If a significant amount of students were interested in rezoning, then sure,” senior Noldine Belizaire said.

The rezoning of the MSD school district has the potential to impact many within the Coral Springs and Parkland communities, but it would bring down the enrollment numbers. It is also important to note that after zoning is changed, it would take about four years for the changes to make an impact on the capacity of MSD, since BCPS would not remove current students who attend MSD and are outside of the newly drawn boundary; it would only apply to the future classes of MSD.

Outside altering MSD’s attendance boundaries, there are several other ways to add capacity to the school, two of which involve the future of the 1200 building.

The presumption of the MSD community is that the 1200 building will be demolished at the conclusion of the criminal trial surrounding the Feb. 14, 2018 shooting at MSD. The State Attorney’s Office indicated in court proceedings that the state intended to have the jury walk the crime scene as part of their case against the shooter. On Wednesday, October 20, the shooter entered a guilty plea in court, which could potentially hasten the demolition of the building.

The demolition does not solve the current over-enrollment issues at MSD.

Keeping the 1200 building and renovating it, would add much needed classroom space. This would keep the existing exterior walls intact while only clearing out and redoing the inside of the building. While this might seem a practical solution, the emotional impact of keeping a building associated with such trauma is probably an unlikely outcome, especially since the budget already exists for the building’s demolition.

Demolishing the building and replacing it with a new building in the same location or another location is also a potential solution, both of which would require a lengthy planning process and funding. For comparison, the cost of the newly constructed 1500 building was $18 million dollars. Locations for a new building are extremely limited. Potential locations could include somewhere within the senior parking lot, the field between the 900, 400, and 1500 buildings, and the area near Marjory’s Garden and the baseball field.

Those in the MSD community have strong feelings as to what they would want to happen in the space where the 1200 building currently stands.

“I think the building should be [torn] down completely. It’s very traumatizing for those that were present during the horrific event,” Belizaire said. “I think it should be remade into a memorial or at least a building honoring the lives of those that were lost.”

Additional solutions could include adding modular units or portables on campus. During the two-year process of planning and constructing the 1500 building, 32 modulars were temporarily placed on top of the school’s outdoor basketball courts and utilized as classroom space. The area was affectionately named Eagle Village. The return of Eagle Village could solve the overcrowding issues at MSD, but would require funding.

None of the possible solutions can provide an immediate resolution and none of them will even begin to be considered until the FISH report accurately represents the usable instructional space on campus.

Editor’s Notes: Since 2018, it has been the position of the Eagle Eye Editorial Board not to include the name or photo of the Feb. 14, 2018 shooter in any of our publication’s coverage, as it is a PTSD trigger for our readership and we believe in the No Notoriety organization’s call for responsible media coverage in the interest of public safety when acts of mass violence are committed. Joseph Garrity’s law firm, Lorium Law, completed an internal conflict of interest review before he provided his legal opinion to the Eagle Eye.