What music are students listening to? 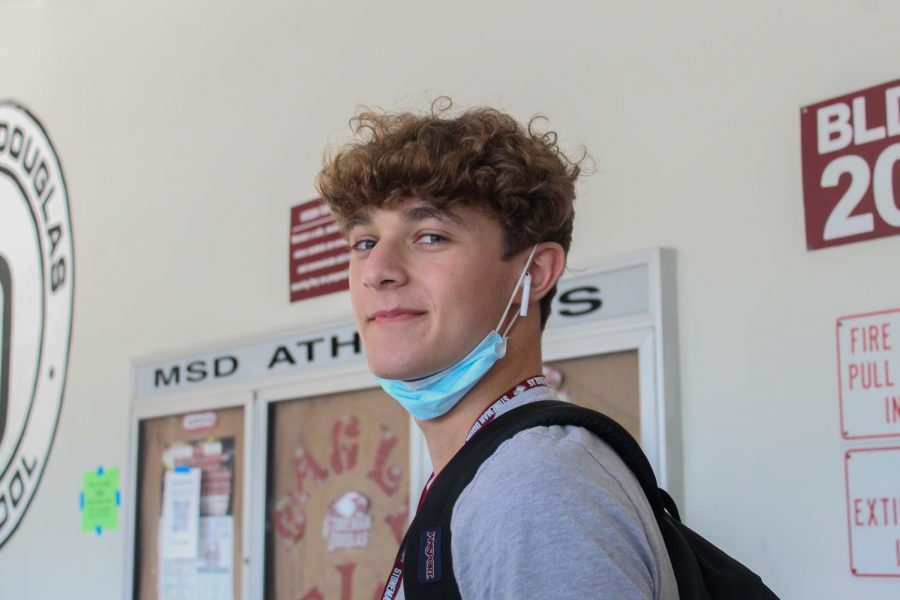 Junior Ty Stevens listens to music through his AirPods on his way to class.

Students of Generation Z, which is any person born between the years 1996 and the mid-2000s, are constantly listening to new music genres to suit their desired tastes and personalities.

According to nationwide surveys, genres such as pop, hip-hop, rock, jazz, rap and country prove to be the most popular genres among students. Students find it very interesting to reflect on the different music genres that are preferred by one another.

One music genre that is popular among students is rap, which is characterized by fast rhythm in which words are spoken instead of sung. Rap songs touch the lives of millions of individuals because of its ability to use music and words to express the rappers and their feelings.

Rap is different from other music genres because it is a combination of rhyming and poetry in a fast-paced format, while other genres may contain a slower rhythm. The most commonly listened to rappers among students are Drake, Kid Cudi, Wiz Khalifa, Immortal Technique and J. Cole.

“I like to listen to rap and R&B [rhythm and blues]. The music is very easy to dance to and I love the flow and feeling it gives me,” Marjory Stoneman Douglas High School freshman Shayeza Chevalier said.

Rap songs have various themes, which is why so many people enjoy the genre. Some people relate very closely to the stories that rappers tell. For example, the “rags to riches” concept is the most common theme in rap today. The “rags to riches” theme is a classical American immigrant story in which someone begins in poverty or deals with hardships, and later makes something of themselves. This theme often has positive mental effects on listeners depending on their perspective of the song.

Some popular, commonly listed artists with the “rags to riches” rap theme according to students, were Kanye West, Post Malone, Travis Scott, Snoop Dog and Eminem.

“The ‘rags to riches’ story theme has a positive effect on me because I relate closely to the concept,” junior Alexandra Senior said.

Majority of students also favored hip-hop, another form of rap music developed in the United States by African Americans and Latin Americans in the Bronx borough of New York City in the early 1970s. Hip-hop has gone on to be one of the most popular genres of music in the world today, becoming a truly global style of music.

Another common genre among students’ interest was rock, a popular music genre that combines elements of rhythm and blues. Common themes of rock include romantic love, social concerns and lifestyles. Due to the variety of themes, many individuals may be drawn to its concepts and beats.

“Right now, I’m listening to [pop/rock artist] Harry Styles because not only is he a great person but a great artist too,” sophomore Malia Maharajh said.

Students have their individual favorite songs and artists to suit their tastes and to make them comfortable.

All in all, music tends to emit self-awareness, which executes a better understanding of feelings and emotions in the human intellect. Music gives a means of escape, especially in places people would rather not be present in, which is why numerous students listen to music in between class changes and during lunch. This hobby brings happiness, excitement and joy, distracting them from their present being.