[Review] Dune is an electrifying but unfinished experience 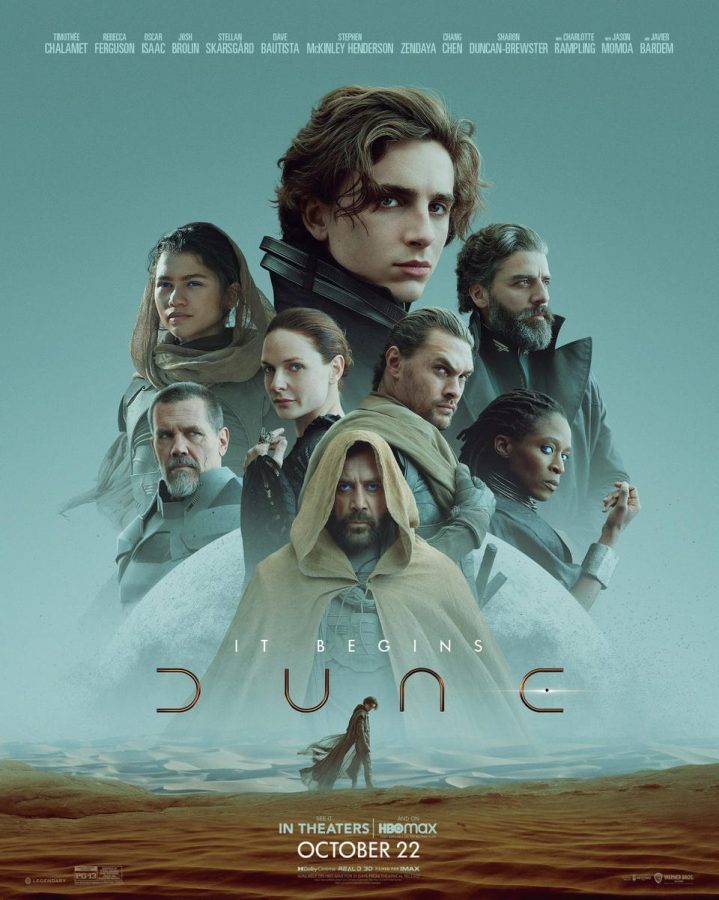 The 1960 novel turned major motion picture “Dune” came out in theaters on Friday, Oct. 22, 2021. This electrifying science fiction movie, starring Timothee Chalamet, was highly anticipated since the movie started press promotion in July. Viewers were instantly attracted to the movie because of the cast that features many A-list actors, like Aquaman star Jason Momoa and SAG award winner Josh Brolin.

A cross between Star Wars and Game of Thrones, “Dune” follows Paul Atreides, played by Timothee Chalamet, and his family traveling to the planet Arrakis, also known as Dune. They are sent to the planet on a mission to cultivate “spice,” found on the sandy dunes, from the Emperor. “Spice” is a magical substance that is the power source for interstellar travel. Fremen, the natives of the desert, have been protecting their home world from assimilation for over 80 years.

Previously habited by the Harkonnens, conflict between the two Houses grow tense over the control of the spice trade. The Duke of House Atreides, Leto, played by Oscar Isaac, wants peace between the Fremen, feeling no need for unnecessary violence.

Paul has been having frequent hallucinations and dreams of a Fremen girl, played by Zendaya, and the planet Dune. The dangers that inhabit the planet force him to protect his family and his mind.

Director Denis Villenueve does a wonderful job at presenting the story and the author’s vision. Capturing the desert in all its glory with sweeping landscape graphics, the viewer emerges into the setting.

Timothee Chalamet portrays a deep emotional character facing internal and external conflict. His acting exceeds the physical body of the character to create a mental animation of the emotions and inner turmoil this character faces.

Paul’s mother, Lady Jessica, played by Rebecca Ferguson, is a complex character forced between two personas, mother to Paul and a sister of the Bene Gesserit. Rebecca Ferguson is a highly talented actress and in this movie you can see her talents blossom. The audience is enraptured by her backstory and personality.

The noble Duke of Atreides, Oscar Isaac, gives an honorable performance as the heroic father and merciful Duke. A favorite of many, this character is highly likeable and causes the audience to have an emotional connection to him.

Although the viewers felt a strong bond towards the characters and actors, many were not fond of the plot. The strong world-building in the beginning lasted longer than a usual movie, and there have been complaints of the movie feeling unfinished.

The original novel, written by Frank Herbert, is a content heavy book, separated by parts, and there have been speculation that there will be multiple parts of this story, causing the unfinished ending.

Viewers were also critical of the lack of Zendaya in the movie, even though she was a key part of the advertisements. Another complaint was the length of the movie exceeding the average 2 hours.

“Dune” can be viewed in theaters everywhere, and can also be viewed through the streaming service HBO Max. Rated PG-13, it has heavy violence and complicated dialogue.

This unique and interesting film leaves the viewer thinking about it for days after. A futuristic dystopian film, fans of movies like “The Hunger Games” and “Maze Runner” will definitely enjoy this movie. “Dune” is a must see!