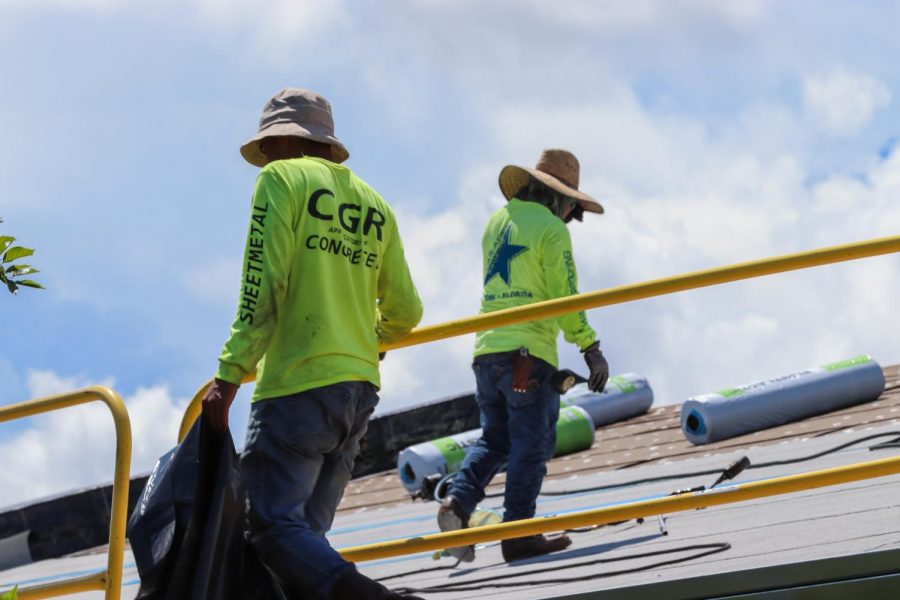 The roof of building 900 undergoes a reroofing project to fix water damage. Every other original building at MSD will receive roof repairs in the coming months.

This story was also reported on by WMSD-TV News.

For the first time since the closure of schools due to the COVID-19 pandemic, the halls of Marjory Stoneman Douglas High School are back to full capacity. Even through the hustle and bustle of students changing from class to class, it’s hard to miss seeing or hearing the construction noises at the back of the MSD campus.

Building 900 is undergoing a reroofing project due to water damage. Classrooms on the building’s second floor experienced the worst effects of the construction, surprising many students and staff members as they returned to campus in August.

Leakage problems were discovered on the ceilings of classrooms during the summer and were reported to the MSD maintenance department. After this discovery, Atlas Roofing was awarded the contract allowing construction on the 900 building’s roof to start in late August.

“The reroofing was slightly disruptive to class, on some days more than others. I understand the necessity because we need safe classrooms without water damage or possibility of mold,” science teacher Jennifer Parr said. “My classroom was lucky enough to just have a few minor leaks to the ceiling tiles, but I know the damage in other areas was more extensive.”

While water damage only occurred in classrooms located on the second floor, construction has brought up disruptions along with other problems for students and staff who utilize other classes throughout the rest of the building.

“The construction on the roof bothers me sometimes because I can’t concentrate with all the noise caused by the workers,” freshman Kelly Salazar said.

While not as extensive, the roof work has taken an audible toll on teachers and students in the downstairs portion of the building.

“For the most part, the roof work has not bothered me. However, sometimes it gets loud and distracting,” English teacher Maria Perez said.

Due to South Florida’s rainy season, the jobs’ expected time of completion was pushed back towards early October. During inclement weather, roofers are unable to work on the roof for their own safety in addition to roofing materials requiring application in a dry environment.

The roofing project was originally a part of the BCPS SMART Bond program, a program created in November 2014 tasked with the renovation of Broward County Public Schools and funded by taxpayers.

“The project was just pulled out of the SMART Bond program. A few teachers were upset with the noise from the work,” Assistant Principal Jay Milmed said. “The completion date for the roof should be in the next two weeks. There are repairs that are going to happen after the roof is completed.”

Interior repairs on ceilings in classes which were affected by the roof work are scheduled to begin in the coming weeks once the reroofing is complete. Additionally, every original building at MSD is due to receive a new roof after the current renovations have concluded.