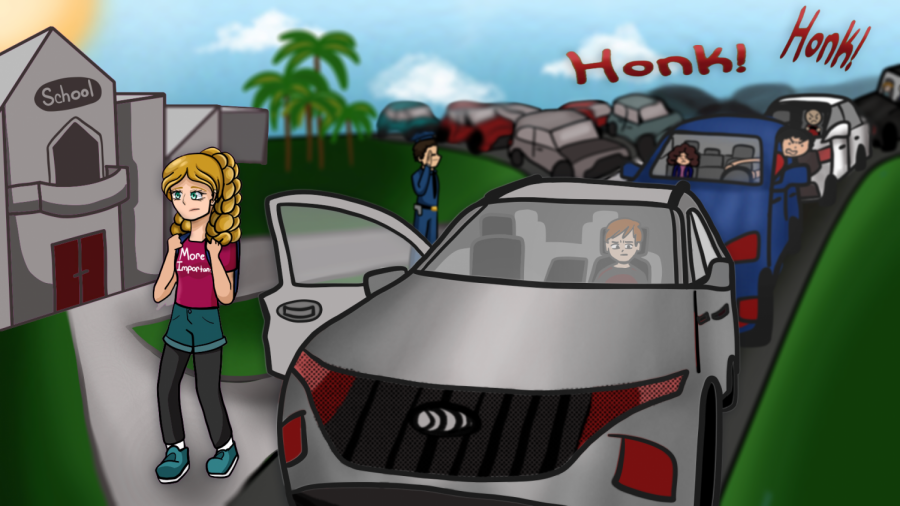 As the world has progressed through the course of time, its technology has improved remarkably. Humans as a species went from walking, to riding horses, to boats, trains, planes and most prominently today, cars. But what do you get when you cross an ever-growing population with billions of these small vehicles? Traffic.

It’s safe to say that any school with over 3,500 students is bound to experience problems related to traffic and transportation. However, the traffic around the campus of Marjory Stoneman Douglas High School is a serious mess.

Our traffic problems stem from a simple concept which has somehow blossomed large enough to severely deteriorate the school’s transportation infrastructure: entitled parents.

These parents, these special snowflakes who apparently believe they are more worthy than thousands of other parents and students, actively circumvent the normal methods of drop-off and pick-up just to save a few minutes.

The worst instances occur in turning lanes. I can be driving to school, following behind a seemingly unentitled-looking car, about to turn right onto Holmberg to get into the senior parking lot, when I am suddenly forced to completely stop behind some parent who, for some reason unbeknownst to me, cannot drive the extra 500 feet to reach the car line. I’m not even able to go around them because of the cars in the lane beside me, so I have to sit and watch their children take their sweet time to get out of the car.

What’s even more appalling is what happens at pick-up time. There is a solid line of cars pulled over facing east on Holmberg, waiting for their children to walk out of school, and in the process forming a second lane on a one-lane road.

Obviously, this extreme misuse of the road results in free-for-all chaos and gridlock. This culminates with the slow formation of Westglades Middle School parents, whose kids get out only an hour later, creating a massive buildup of cars all the way down to the roundabout.

I feel for the poor shoppers who just want their coffee or Subway and are stuck behind the swarms of parents and students, but I also feel for myself, when I have to rush out of school to get to Crumbl at least twice a week and can barely get into the parking lot by the time my shift is supposed to start.

Gridlock around campus after school is a big hassle. Many students and teachers alike, often sit waiting behind the sea of parents. I’ve sat at the traffic light at Pine Island and Holmberg for upwards of 10 minutes, waiting for the other seniors and parents ahead of me to go, while also being at the mercy of the groups of students biking and walking at the crosswalk.

I know it’s not just me who’s frustrated at the inappropriate usage of the roads around the campus. Most every other senior and teacher I’ve talked to have shared their own stories of long waits and unformidable traffic. So, what is there to do exactly?

For one thing, the Broward Sheriff’s Office needs to step up their enforcement of basic road laws. They obviously know about the problem since they have a large presence on campus and an officer outside the senior lot directing traffic daily, yet to my knowledge, they have done little to prevent these self-serving parents from abusing the roads. I say bring the tickets on; what they do is obviously illegal, so make an example out of a few parents and show the egotistical lot of them that they cannot keep up their dodging of legal drop-off and pick-up methods.

There’s also a simpler solution: arriving earlier in the morning and later in the afternoon. The school is open before 7 a.m. and after 3 p.m., but there are consistently the most parents right before school starts and right after school ends. I understand the desire to sleep in more in the morning and get home as soon as possible in the afternoon, but why not take a few extra minutes out of the day to help prevent the large influx of traffic by spreading it out over a larger period of time?

While the traffic around school seems like an insurmountable problem, there are a few very simple solutions that can be done to greatly alleviate it. But the biggest one I would suggest? Get off your high horse.