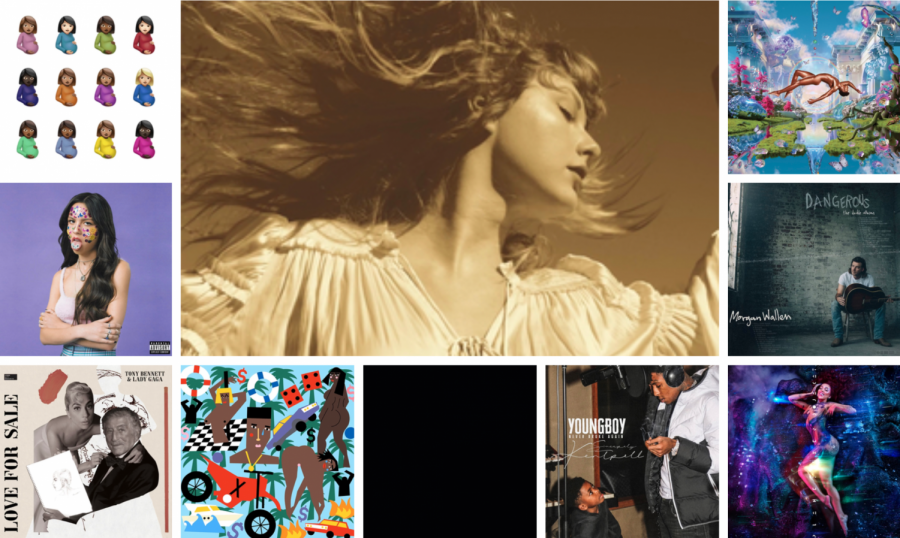 With artists releasing albums and new singles daily, there is always something new to listen to in the music industry. Billboard is one of the many publishers that keeps readers updated on any musical releases. Billboard is an American music and entertainment magazine that has grown very popular over the years. They publish well-known compilations, such as the current Top 100 or 200 albums and songs.

1. Fearless (Taylor’s Version).
Taylor Swift’s re-recorded album “Fearless” was released on Friday, April 9, 2021 and includes all her original songs from the “Fearless” track, along with six vault tracks that were written and unreleased. Swift is said to be re-recording all her albums except “Lover,” “Folklore” and “Evermore” after she lost the rights to them to her producer. The six vault tracks include the songs “You All Over Me,” “Mr. Perfectly Fine,” “We Were Happy,” “That’s When,” “Don’t you” and “Bye Bye Baby.”

4. Sincerely, Kentrell.
This was released by Youngboy Never Broke Again on Thursday, Sept. 23, 2021. With 23 tracks, this is the artist’s third studio album. The album is hip-hop-based, sharing songs about the challenges and childhood problems he faced, like losing his mom at a young age. 5. Montero.
This album by Lil Nas X was released on Friday, Sept. 17, 2021. This is the artist’s debut album and has been a hit on several social media platforms. The album has 15 tracks featuring popular artists like Doja Cat, Elton John, Megan Thee Stallion and Miley Cyrus. Lil Nas X’s tracks on this album describe the troubles he faced before fame, like how he always felt lonely and unaccepted for who he was.

6. SOUR.
This album was released by Disney channel star Olivia Rodrigo on Friday, May 21, 2021. The leading hit single “Drivers License” broke records after it was released. This is Rodrigo’s’s first studio album and has 15 tracks on it, four of which have had music videos that go along with it. Rodrigo sings about the struggles of being a teenager and her dramatic breakups, specifically one she has gone through in the past few years.

7. Planet Her.
This album by Doja Cat was released on Friday, June 25, 2021, making it her third studio album. The album has 19 songs and features many popular artists such as Ariana Grande, The Weeknd, JID, Eve, Gunna and SZA. This album features tracks about love and loss with a pop and rhythm and blues tone.

9. Dangerous: The Double Album.
This album was made by Morgan Wallen and released on Friday, Jan. 8, 2021. It has 30 songs, making it the artist’s second studio album released. The album features artists Ben Burgess and Chris Stapleton. “Dangerous: The Double Album” is a country album that was made during quarantine.
10. Donda was released on Sunday, Aug. 29, 2021 by Kanye West after the release being pushed back several times. The album is a tribute to Kanye’s mother and is also his tenth studio album. The album has 27 tracks, which are popular among many social media platforms.

There is a great variety of rap albums to country albums, ensuring there is something for everyone to enjoy. Any of these albums can be streamed on Apple Music, Spotify, Pandora or any other place you stream.