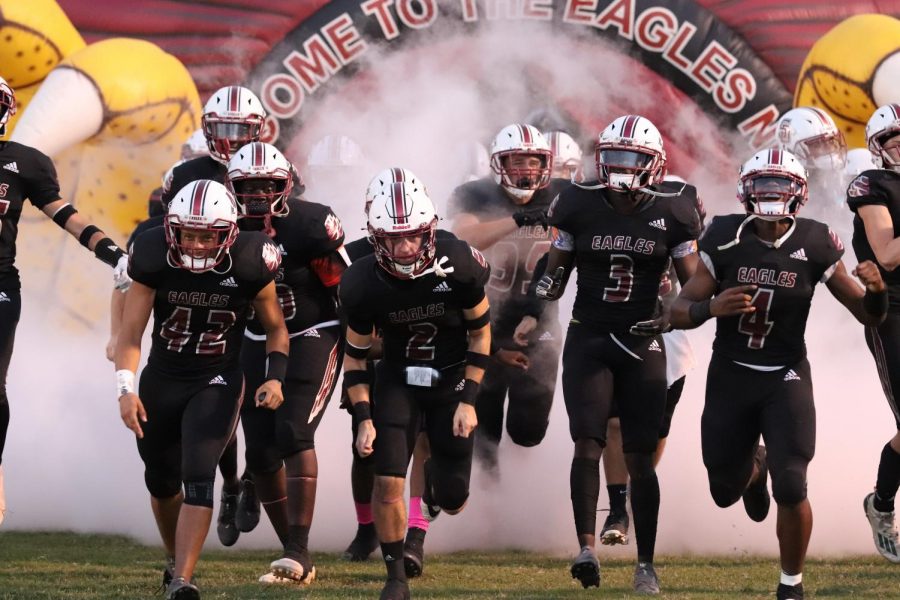 The Eagles run out of the tunnel all hyped up to start the Pig Bowl against Coral Springs High.

Coming into Friday’s game with a 3-3 record, the Eagles sought an extra bit of momentum with only two games remaining before the postseason began.

After a pre-game ceremony was held to commemorate the team’s senior players and their service to the MSD varsity football team, the Pig Bowl kicked off in front of a packed Cumber Stadium.

“Senior night is special because it really hits you that this will be the last time you play at a home football game. The buildups start in the pictures with your family and you realize that you need to make it count,” senior safety Giany Zengotita (33) said.

With most of the Eagles’ games this season, the team’s defense helped cover up their offensive struggles in the first quarter. For their first few possessions, the Eagles turned the ball over to the Coral Springs Colts on various occasions and could only keep the score at 0-0.

Momentum shifted in the Eagles’ favor after running back Matthew Wilson (4) put together a series of rushes that pushed his team into scoring position. Wilson eventually drove the ball into the endzone to give the Eagles a 7-0 lead. After a field goal added to the lead, the first quarter ended with a 10-point advantage for the Eagles.

After the first score, the Eagles took complete control of the game and never looked back. The team showed determination on both sides of the ball and prevented the Colts from having any chance in the match.

Wilson was particularly impressive for the night, scoring two touchdowns and accumulating over 140 rushing yards to inspire a usually stagnant Eagles offense. The first half concluded at a score of 30-0, all but confirming victory for MSD even with two quarters left to play.

In the fourth quarter, the Eagles coaches began rotating several senior players into the game, including those who usually do not play much, in honor of it being their final home game.

“I’ve waited about 2 years to step on the field, especially on senior night to be with all the seniors is definitely a memorable moment in my life,” said senior quarterback Matthew Herz (48).

After improving their record on senior night and their next opponent West Boca High School forfeiting before the match, the Eagles will enter their final regular season game with a record of 5-3. MSD will be facing Coral Glades High School at home on Friday, Oct. 5, before entering district postseason matches.