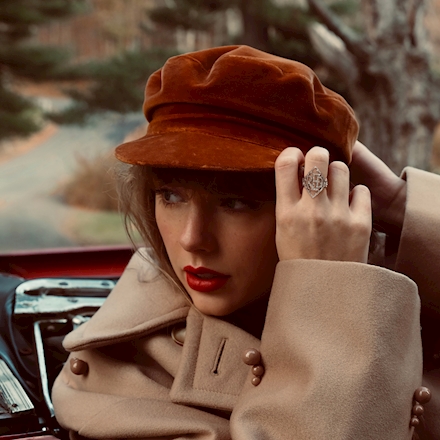 Music artist Taylor Swift released her album “Red (Taylor’s Version)” on Friday, Nov. 12, 2021. The highly anticipated album was released six months after her announcement for the release. This second recording of her early album “Red” is receiving attention for being one of her most critically acclaimed albums that marked her transition from country to pop. The choice to re-record the album is due to her abusive producer who claimed ownership of her early songs.

The two hour and 11 minute record includes 30 songs and a message from Taylor Swift herself thanking her fans. This includes nine songs “from the vault,” which include “Babe,” “Forever Winter,” “The Very First Night,” “Run” featuring Ed Sheeran, “I Bet You Think About Me” featuring Chris Stapleton, “Better Man,” “Message in a Bottle,” “Nothing New” featuring Phoebe Bridgers and “All Too Well (10-minute version). A song released “from the vault” means they have not been released until now. The album also features Gary Lightbody in “The Last Time” that was released in the original album.

Prior to this album, Taylor has released three albums in the course of two years, one of them being a re-recording of “Fearless,” her second studio recording. Fans have highly requested the re-recording of “Red” and she did not disappoint.

The opening track of the album, “State Of Grace,” is an upbeat song that shows how love can be overwhelming and all-consuming. Track 20 features “State Of Grace” acoustically and gives the song an autumn vibe. The song was produced and sung very well, and could easily be a favorite for many.

The album’s title song, “Red (Taylor’s Version),” is the next track on the album. “Red” demonstrates the contrast of loving and losing someone. The song features the stages in which you love, lose, miss and eventually forget the person you once thought would be with you forever.

This song holds significance for Swift and represented her feelings the most, so much so that the album was named after the song. The song sums up most of the album as a tragic love story.

The short monologue during the song where she acts out a conversation she had adds a nostalgic moment for Swifties, her fanbase, who were fans at the time. The song brings back memories and sounds better with her developed voice.

Track 11, “Holy Ground (Taylor’s Version),” is very different from the original take. Swift’s new mature voice in the cheery song, filled with heartfelt confessions, is something everyone should hear.

The way the song flows to the next track, “Sad Beautiful Tragic (Taylor’s Version),” is magical. The two songs are a story that starts with love and ends with heartbreak.

Another song portraying heartbreak is “The Last Time” which features Gary Lightbody. The duet illustrates the grief stages of losing a partner, showing the perspectives of both sides of a relationship. The song is rumored to be about her relationship with Jake Gyllenhall and how he should have apologized, saying this is the last time he will have to ask for forgiveness for hurting her. He essentially says he will be better, but she refused to take him back.

The sadness of not being able to let go of the one person you loved is portrayed throughout the song. The two individuals going back to each other, even though they end up breaking up each time, references another song on the album: “We Are Never Ever Getting Back Together.”

“We Are Never Ever Getting Back Together (Taylor’s Version)” is another beloved song on the album. The Grammy opener and single of the original version keeps its charm in the revised version, but also adds a new sense of bitterness in the way she says “trust me,” imitating the way men keep saying to trust them, but always betray her in the end.

Track 23 has a song “from the vault” called “Nothing New.” The song features Phoebe Bridgers, whose voice blends perfectly with Swift. The slow guitar rhythm matches the somber lyrics, as the first verse of the song implies the sexism and criticism that women often feel in the music industry. The song asks, “And will you still want me when I’m nothing new?” This inquires if her future lover will still love her when she is considered “old news.”

Track 21, “Ronan,” is a sad song on the album dedicated to a boy that died due to cancer. This is a charity song in which the sales were donated to help individuals fight cancer. Ronan unfortunately died of Neuroblastoma at three years old. The song is made up of quotes that his mother said about Ronan including, “I can still feel you hold my hand, little man.” The song is sincere and touches people’s hearts.

Another song on the album that gives off an autumn vibe is the long awaited “All Too Well.” Unlike the original five-minute version of the song, the revised version is extended to 10 minutes.

Swift left all of us like a crumpled up piece of paper after listening to the new teminute version. The heartbreaking song was acted out in a short film with stars Dylan O’Brien and Sadie Sink. The song did not disappoint and exceeded the expectations that were set.