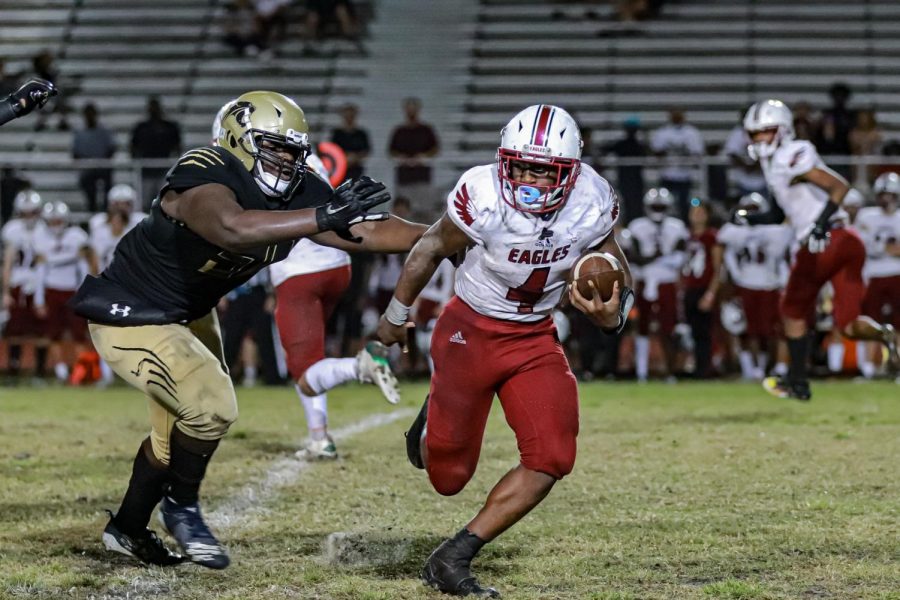 Running back Matthew Wilson (4) avoids being tackled by a Bobcats defensive lineman.

After a 47-29 victory granted the team entry into the Division 8A District Playoffs, the Marjory Stoneman Douglas High School varsity football team was faced with another challenging opponent.

The Eagles would face the Western High School Wildcats, a team who ranks in the Top 25 High School Football Programs in the state of Florida according to maxpreps.com.

The match against Western took place on Friday, Nov. 12, when the Eagles traveled to face Western on their home field. Although the opponent would be difficult to beat, MSD hoped to use their momentum from the three game win-streak that the team carried into this game.

Due to COVID-19 restrictions during the 2020-2021 season, there was no playoff season for the Eagles, meaning most of the team had never participated in a postseason game. Nerves were high for MSD, although there was still hope that the team could pull off an upset.

Western showed their talent almost immediately after the 7:30 p.m. kickoff. A touchdown within the first five minutes gave the Wildcats a 6-0 lead over the Eagles, a bad sign for the MSD team who usually thrives on defense.

However, the Eagles were able to counter the initial score with several rushes from running back Matthew Wilson (4), bringing MSD close to the endzone. Wilson capped off the first quarter with a 25-yard touchdown run, giving the Eagles a surprising 7-6 lead.

As the Eagles kicked the ball back to the Wildcats after the touchdown, the team recovered a fumble deep in Western territory.

MSD would have had a chance to score back-to-back touchdowns and completely take control of the game, but the fumble was ruled to have happened after the end of the play so Western received the ball.

Right after the controversial fumble decision, the Wildcats’s quarterback launched a deep throw ending in a touchdown. The lead went back into the hands of the Wildcats and from that point forward, the distance between the two teams continued to grow.

By the end of the first half, Western had blown the game wide open at a score of 28-7. The Eagles’ defense struggled to hold back Western’s talented receivers, leading to several passing touchdowns.

As the defense struggled, Western was also able to stifle Wilson and the other MSD running backs, a crucial part of the Eagles’ strategy from the very beginning of the match.

“The team having a lot of underclassmen, we were inexperienced coming into the game, especially on defense,” defensive end Tucker Jean (62) said.

The game ended with a score of 43-7, officially ending the Eagles’ season in disappointing fashion. After exiting the postseason, MSD looks to recover and prepare for the 2022-2023 season with returning players, while celebrating the seniors who have played their final game in an Eagles uniform.