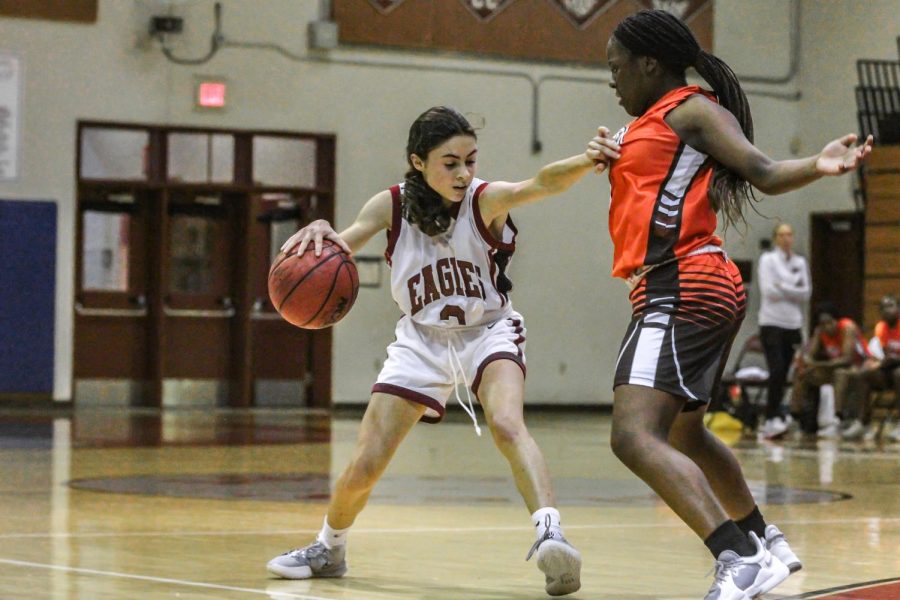 Defending the hoop, point guard Stella Marvel (3) dribbles the ball away from an opponent player from Piper High School.

Bouncing back from last year’s delayed winter season, the Eagles, who held a 2-2 record last season, were eager to showcase their skills from the unusually long off-season at their season opener. The team went into the game with high hopes from last season, as they had the luxury of playing on their home court.

However, the Eagles quickly found themselves in adversity while the Bengals, who previously held a 2-4 record, took the first lead of the game and held onto it for the rest of the first quarter.

In an attempt to catch up, the Eagles made some aggressive, offensive fast breaks that drew a shooting foul from the Bengals. Point guard Stella Marvel (3) stepped up to the lane and scored both alloted free shots, which gave two additional points to the Eagles. At the end of the quarter, the Bengals only held a small lead of 8-5 over the Eagles, which gave the team some hope to level the score within the next quarter.

“I think the team played well, though there is a lot to learn,” shooting guard Caylee McFarlane (14) said.

Going into the second quarter, the Eagles were presented with a strong offense from the Bengals, who managed to trip up the Eagles’ defense through fast breaks. Much of the points earned by the Bengals resulted from mistakes on the Eagles’ offensive end.

Repetitive overthrown inbound passes and missed shots widened the score gap to 20-12 at the end of the second quarter, allowing the Bengals to maintain the upper hand for the second half of the game.

Down by eight points, the Eagles looked to make improvements. Half-time lent momentum to the Eagles as they drew another foul from the Bengals, which resulted in a change of possession within the first few minutes. Unfortunately, the Eagles lost the ball off a missed shot, and the Bengals took advantage of this mistake to add another two points to the board.

After a series of failed free throws and multiple fast breaks from the Bengals, the game was looking down for the Eagles. The team managed to score a few points, but the Bengals exposed the Eagles’ struggling defense to end the third quarter with a score of 34-22.

The fourth quarter had a similar outcome for the Eagles, as the Bengals continued to pressure the Eagles’ offense and dominate their defense. A turn of events from a technical foul on the Bengals allowed Marvel to score another two points, making the score 38-26, Bengals in the lead.

However, the Eagles’ attempt to come back was crushed as the Bengals got into a pattern of scoring back-to-back two pointers, stealing the ball from the Eagles time after time.

“The next game, I feel like we can be more successful by working together and having a good attitude throughout the entire game whether winning or losing,” McFarlane said.

Even though the Bengals had a favorable lead, the Eagles still had some fight left. Making a last resort push to make up for past mistakes from her team, point guard Leah Dubreze (23) intercepted a pass and took it down the court to score a two-pointer. Nonetheless, the time ran out and the Eagles accepted defeat with a score of 54-35.

It is evident that the Eagles have room for improvement, as they learn to adjust with the new freshmen on their team. Despite their loss, the Eagles look forward to working hard at their next home game against Flanagan High School on Thursday, Nov. 18.