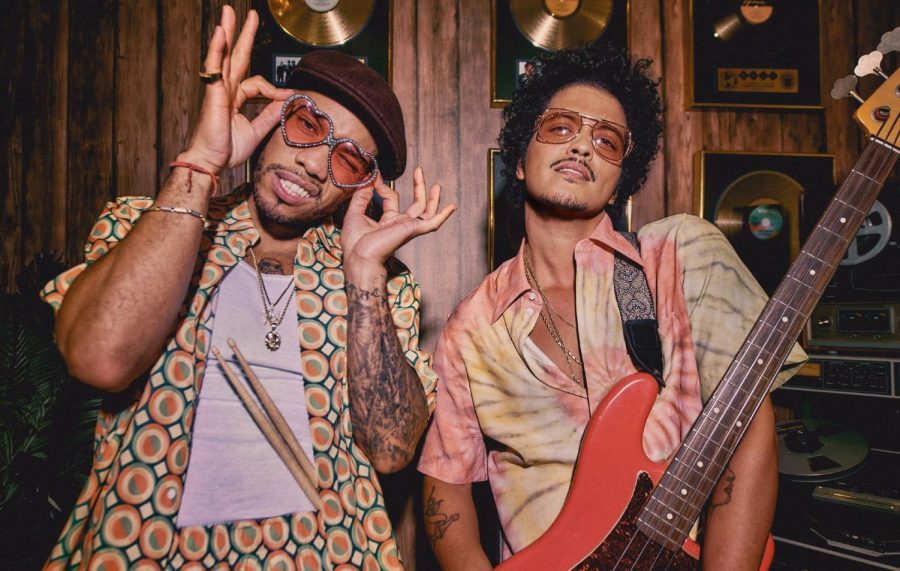 Bruno Mars and Anderson Paak have collaborated to create a rhythm and blues album that beautifully captures the 70s aesthetic, labeled “An Evening with Silk Sonic.” Their debut album features nine wonderfully crafted songs that are romantic, angry and groovy.

The album begins with a track named “Silk Sonic Intro.” It introduces each of the band members with a catchy beat. Running a length of one minute and three seconds, the track sets the vibe of the album and transitions beautifully to the next song “Leave The Door Open.”

The first performance of “Leave The Door Open” debuted during the 2021 Grammy Awards. This slow, romantic R&B song tells a story of devotion and love. Bruno Mars and Anderson Paak’s vocals are harmonious and work wonderfully together. Being the first song of the album, it set a precedent for the vibe of the rest of the album. This fan-favorite definitely earns the praise it receives. Several thought it would be a “one hit wonder,” but Mars and Paak quickly proved them wrong with the next song on the track: Fly As Me.

“Fly as Me” is an upbeat 70s groovy track that makes listeners want to get up and dance. A song about getting a partner, Mars and Paak’s lyrical genius shines. The chorus verse “I deserve to be, With somebody as fly as me, Somebody this fly” is super catchy and accurately describes the men of Silk Sonic. This song is the perfect song to sing to a crush or partner. One of my favorites, it is a wonderful song that is the right track for a good day.

“Smokin Out The Window ” is a slower song in the album and features a more modern R&B tune. This Tiktok sensation is a song about the loss of a girlfriend. The smooth vocals in the chorus is heavenly and reminds me of Bruno Mars’ other songs. “Smokin Out The Window ” is a rollercoaster of tempos composed of fast parts and slow parts. Overall, this track is my favorite song of the album and is the perfect song for the middle of the album.

Up next is “Put On A Smile,” a poem in song form that adds to the heartbreak of the previous song. Mars and Paak communicate their feelings of heartbreak with harmonies and a chorus that accurately describes the common sorrow that follows the end of a relationship. “Put On A Smile” even has rain sound effects to add more emotional emphasis. This track is perfect for looking out a window on a rainy day or belting outside your lover’s door. Catchy yet depressing, “Put On A Smile” is a great interlude from the prior fast, upbeat songs.

Alluding to angel numbers, “777” is a fast, 90s-like song that describes a night at the casino. The song follows Silk Sonic playing at a casino, needing the magic numbers “777” in order to win. Passionate and chaotic, this seventh track of “An Evening with Silk Sonic” brings back the energy for the second half of the album. Shorter than the other main songs on the album, playing for only two minutes and 43 seconds, “777” is a wonderful song that will make listeners think they just won the lottery after hearing it.

A song that makes the listener want to put on some roller skates, “Skate,” is the eighth song on the album. A devotional love song, Mars and Paak try to get the attention of a woman and “want to get to know her,” according to the lyrics. This song is the perfect song for roller skating or dancing at a party. A creative metaphor to describe chivalry, “Skate” is a fun energetic song that is in my top three most played.

Ending the album, “Blast Off,” is a groovy track capturing that wonderful 70s vibe. This melodic song that predicts Silk Sonic’s success talks of going to space and seeing the praise from others. “Blast Off” has a chorus that will stick in your head for hours after. I think this ninth track sums up the album perfectly, and I really enjoyed the guitar riff and bridge in the song.