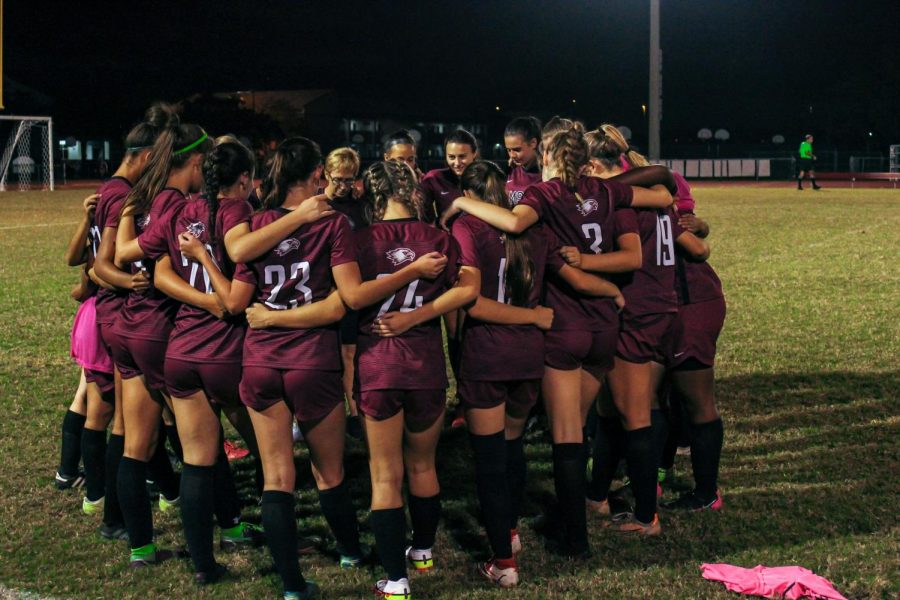 They shoot and they score. The MSD women's varisty soccer team secures a win over Cypress Bay High School with a score of 1-0.

The Eagles had stepped onto the field with determination as their 10-0 victory over Monarch High School on Wednesday, Nov. 10 was fresh on their minds.

On par with their last three matches, the Eagles started off strong and aggressive. Defense was head-to-head as Cypress Bay didn’t have any weak points for the Eagles to expose right away. Attacks and blocks were consistent as each team came out with all their force.

A few minutes in, Cypress Bay had a penalty kick against the Eagles. Emotions ran high as goalie Carly Brodsky (0) was faced against a Cypress Bay player; unfortunately for Cypress Bay, their kick hit the goal post and did not make the shootout.

There were many close calls in the first quarter between the two teams but no shots were successful. Between Brodsky and defenders Lily Conn (5) and Calista Mccausland (6), Cypress Bay had their work cut out for them. Many shots went out of bounds and had to be thrown in as neither team was willing to risk a shot, it seemed as if the ball spent more time in the air than on the field.

Powerful kicks and passes kept the ball over the heads of players and out of the goals. The first half ended with no advantage for either team at 0-0.

At the start of the second half, there was sluggishness in the execution of the Eagles’ plays, but consistency was shown in their communication and trust in each other. All their passes, even when above their head, were controlled and exerted with much force.

Lacking the energy from before, the Eagles were noticeably exhausted after the many runs to prevent any holes in their defense. However, a talk from their coach got them back on their game and ready to win.

“Coach Rountree kicked us in shape and said this is what you need to fix, and we all went out there and fixed it, we wanted to win,” Molly Conn (12) said.

Throughout the game, it seemed as if the players of Cypress Bay had targets on their backs. This was because the last time the Eagles played against them, they lost in the state semifinals 2-0. Their loss was tough, but this was a chance to redeem themselves.

Six minutes until the second half ended, forward Molly Conn scored the last goal, which secured another win for the Eagles.

Surprisingly, this goal was almost a loss since the victorious end could’ve had a different ending; Molly Conn didn’t realize the ball went in until her team cheered for her. The happiness was evident as the team cheered for their player, and the game ended 1-0.

“It was a big game for us just to prove that we could do it, we could win, and it was just an exciting goal,” Molly Conn said.

The next game for the Eagles will be at 7 p.m. on Monday, Nov. 29 at Cumber Stadium against Pembroke Pines Charter High School.