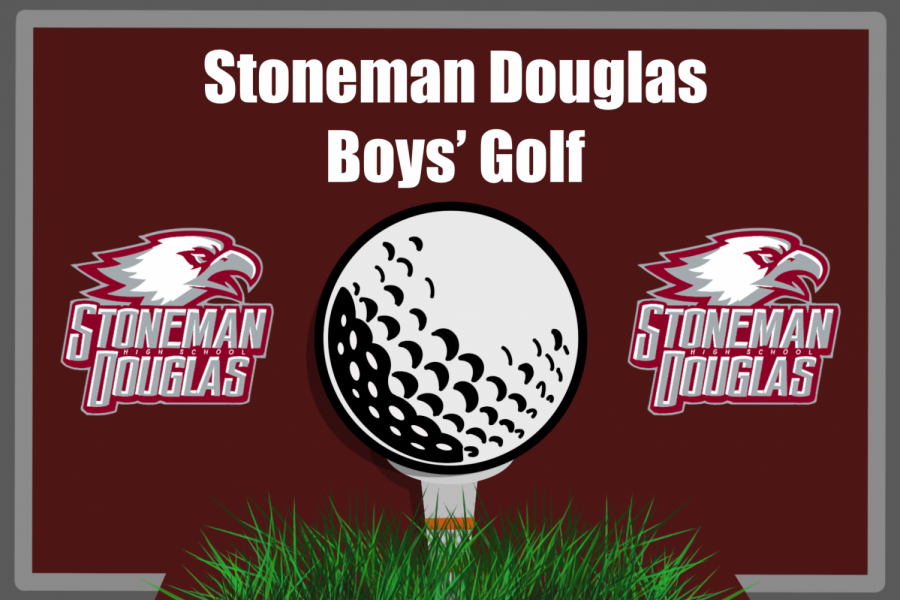 The MSD men's varsity golf team is prepared for an accomplished season.

Throughout the season, the Marjory Stoneman Douglas High School men’s varsity golf team had many accomplishments, as they finished with a 7-2 record and participated in two tournaments: the BCAA Invitational and the Maverick Invitational.

The Eagles started off the season strong going 4-1 throughout their first five matches.

On Sept. 3, the team started the season off hot, winning their first game against St.Thomas Aquinas High School with MSD junior TJ Thompson scoring a 35 on nine holes, and senior Andres Barraza scoring a 37 on nine holes. The Eagles went on a winning streak after that, winning three of their next four matches.

Starting off 1-0, the Eagles had good momentum going into their game on Sept. 8 against Cypress Bay High School. Junior Dylan Marrone showed out as he got a score of 36 in nine holes.

At home, the Eagles looked to continue their undefeated record as they played Cardinal Gibbons High School for the first time on Sept.14. Barraza led the team as he scored a 36 on nine holes.

On Sept. 21, the players went on the road to play St.Thomas Aquinas for the second time. The score was a little bit closer as the Eagles narrowly edged out their opponents for the win. Thompson scored a 31 on nine holes to lead MSD to the win.

Spanish River High School, being one of the best teams in the state, was arguably the Eagles’ toughest opponent. Spanish River handed the Eagles their first loss of the season. Leading the Eagles, Thompson and senior Devan Chahal both scored a 36 on nine holes.

“I played pretty good [this season], I played well during matches,” Thompson said.

The Maverick Invitational took place on Oct. 4, with MSD finishing in 12th place. Their leading scorer was Barraza who scored a 70.

After their 4-1 start, the Eagles had one of their easiest matchups of the year against J.P. Taravella High School. They outscored them by almost 100 strokes as Barraza once again led the team with a score of 36, and Thompson, Chahal and Marrone not far behind, scoring under a 39.

Western High School took on MSD on Oct. 8. The Eagles once again continued their winning streak this game, as they moved to 6-1 in the season. Barraza continued his amazing season, scoring a 38, leading the Eagles to another victory.

The BCAA Big Eight took place on Oct. 11 with MSD finishing first, scoring a total of 282 strokes, and Barraza scoring a 66.

The day after, MSD took on Deerfield Beach High School, and won easily. Chahal and Marrone led the team with a score of 36 on nine holes.

On Oct.13, the golf team was handed their second loss of the season in a match-play game against American Heritage (Broward). MSD ended up losing the match by one (3.5 to 2.5) against the 2A state champions. Barraza and Chahal contributed with wins; however, sophomore Ryan Shimony, Thompson and Marrone lost their matches and sophomore Jayden Thuraisingham drew his match.

“[I feel like I need to work on] just getting my short game better and [my] putting,” Thuraisingham said.

District playoffs took place on Oct. 26 in which the Eagles finished first out of a total of seven teams competing. Barraza led the team with a score of 71. Marrone and Thompson both helped as they scored under a score of 80.

Regional playoffs then took place on Nov. 1, with the event as one of the most important matches of the season. MSD finished seventh with Marrone, Barraza, Shimony and Thompson all scoring under 80, with Marrone leading with a score of 74.

“We underperformed at Regionals. A lot of kids who normally shoot much lower shot higher than I expected, yet we did not get to advance as a team to states,” coach Ernest Rospierski said. “I really badly wanted to take the whole team to states.”

The golf season for the MSD men’s varsity golf team was a successful one with many victories and two close losses. The team worked hard and led themselves to a 7-2 record. With a close match in their regional playoffs, they ended the season with one more stroke than the team that ended up advancing to state playoffs.