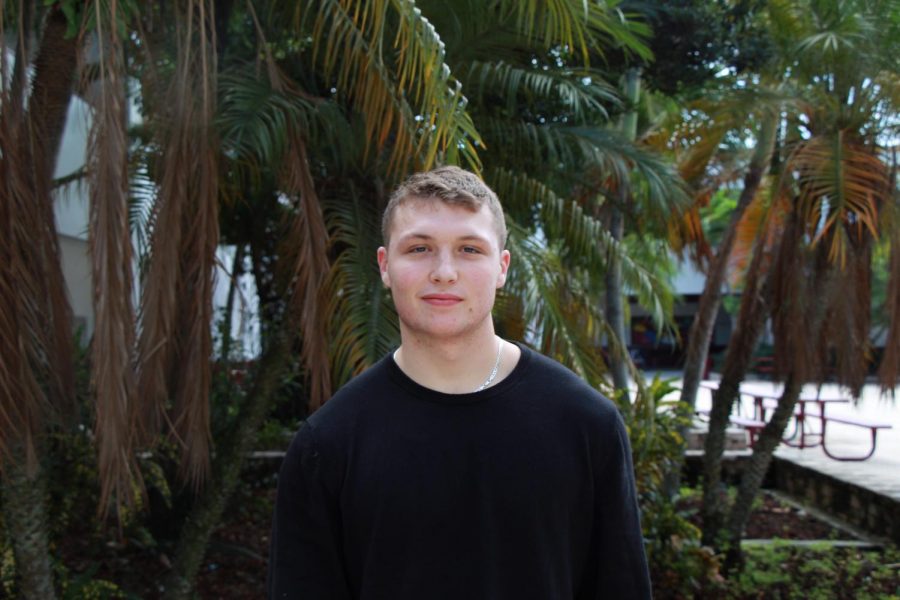 Senior Sean McHenry is new to the realtor business and is eager to make a name for himself.

Marjory Stoneman Douglas High School senior Sean McHenry is a very involved student, cheer competitor, podcast speaker for “Money Talks Money Matters” and impressive young realtor. It is evident that McHenry is ambitious by taking on so many activities and being successful in them.

In Oct. 2021, McHenry decided to join the cheerleading team after approaching MSD Cheer Coach Patricia Thompson who encouraged him to try-out. Now that he is on the team, McHenry is constantly working. During competition season, which began on Tuesday, Nov. 16, the team has been practicing every Monday and Tuesday in the mini gym from 3p.m. to 5p.m.

“Sean is a hard worker and consistently motivates the cheerleaders to perform to their best ability,” Thompson said.

Football was too time consuming with a strict practice schedule of approximately three hours every weekday, and he needed a more flexible sport schedule being a realtor and owning a podcast. Therefore, Sean decided to consider Thompson’s offer and try cheerleading.

Being a prior football athlete, McHenry deals with a lot of criticism playing a sport that many people would refer to for females only, as Sean is the only male on the team.

“I do what other males would never think to do and that’s what keeps me motivated,” McHenry said. “Cheer has certainly affected how I view masculinity with the understanding that female dominated sports are as hard, if not harder, than predominantly male sports.”

Most males would not be brave enough to commit to a sport that others would label as a “feminine sport.” Through being on the cheer team, Sean demonstrates courage towards his masculinity, as others recognize his confidence in joining a sport despite the criticism.

“It came as a surprise to Sean how much of a commitment competition cheer is, but it’s nice to see him embrace that and want to put in the work,” senior Cheer Captain Katie Peterson said.

McHenry is attempting to break sexist stereotypes by joining cheerleading, a sport that is open to everyone, whether male or female.

Additionally, McHenry founded the “Money Talks Money Matters” podcast along with MSD alumni Darian Williams in June 2021. Their goal is to enlighten Gen-Z about finances and help them understand the importance of being financially stable alongside providing them tips to do so.

“Sean invited me on a show as a guest, we did not have any expectations for how it would go but in our first conversation I realized that we have similar ethics and values,” Williams said. “He understood that perfection didn’t come from thin air but rather the process of trying new things and making mistakes along the way. We both have discipline and vision so I immediately knew it was going to be a good partnership.”

McHenry views the significance in understanding and solving financial issues from personal experience. He finds pure joy helping others in such an important life aspect that many youth do not recognize.

“I saw my family struggle with personal finance so I dedicated myself to make a change and start leading about personal finance, then with enough information I wanted to teach others,” McHenry said.

McHenry and Williams have an organized preparation routine before recording an episode for the podcast. First, they do a background check on their guest speaker, who is typically someone in the community. Then, they set up the equipment, including their camera and microphone gear. After that, they go over their interview questions they will be asking the guest and then they film.

With 12 episodes currently released, the podcast releases a new episode every two weeks that each range from 45 minutes to two hours long. This month they will be releasing the second season.

“The second season will be different on our end by reaching out to business and getting sponsored podcasts,” McHenry said. “Listeners can be excited for new impactful contents with the goals to improve people’s lives.”

With every new guest speaker, McHenry and Williams are able to take away valuable lessons. McHenry’s favorite episode was with guest speaker Ashley Baillio.

“I’ve taken something from every guest in one way or another,” McHenry said. “My favorite episode was with Ashley Baillo because she explained her inspiring story of how she started with not having a lot to running two Chick-Fil-As and a full time real estate agent.”

McHenry has enjoyed every second of the podcast and does not plan on stopping anytime soon.

McHenry also became a realtor as of June 2021. He works for the business “Blue Realty,” a Real Estate Company that provides realtors and serves all of South Florida. Their phrase “follow the blue cars” is listed on all of Mchenry’s Instagram posts in a hashtag captioned under images with bright blue cars parked in front of each house.

When McHenry was looking to try real estate he met with people in over 20 offices before encountered Steve Boyette, the co-founder of Blue Realty. McHenry explained that though he is a student with no license nor experience, he wanted to intern somewhere to practice real estate. Boyette noticed Sean’s potential and hired him immediately. Sean looks up to Steve Boyette by following his footsteps in real estate.

“From the first moment that I sat down with him [McHenry] in my office to get to know him for the first time I recognized something special within him,” Boyette said. “He had a desire for success and hustle that is rare in the business world and even though he was extremely young he reminded me a lot of myself when I was young and looking for opportunities towards success.”

Soon enough, McHenry grew to a Blue Realty team member rather than an intern. McHenry and Boyette currently have a contract so they will now be partners for the next three years.

McHenry is already setting the path for his future by starting his dream career. Being proficient, McHenry knows it is beneficial to stay ahead of the game.

“I knew time was ticking and college wasn’t one of my options so I wanted a job that would suit my personality and help me to grow as a businessman and entrepreneur,” McHenry said. “My purpose in life is to help others and that’s exactly what I’m doing everyday.”

Real estate agents, like McHenry, are motivated to help others find not just any house, but their home. He listens to his customers and pushes clients to persevere into the “real world” with a place to eat, sleep and rest.

“My real estate is going great, [I am] closing on my third deal for October with a production of 1.2 million dollars closed upon,” McHenry said.

Several students may assume that being a realtor, athlete and student simultaneously would be a struggle. However, McHenry effectively manages his time by getting an early start to the day motivated by a strong passion for real estate.

“Starting my day off every morning at 4:30, school is something I leverage on with trying to make new connections and network with as many people as I can,” McHenry said. “With extracurricular activities, I balance that with my work schedule to make sure I have time for work but also sports. I make sure there is not a second wasted nor a dull moment.”

Sean is able to set aside two to three hours per day for real estate, as he additionally practices for MSD cheer twice a week and runs the podcast for three to four times a week.

His passion for financial dependability and success pushes back the challenges he faces with such a busy schedule. With the hope and desire that he could use the business for financial support, McHenry is constantly working.

“My goals for my business is to work to the point where work becomes optional. I don’t believe in the traditional ‘nine to five,’” McHenry said. “My goal is to work as hard and effectively as possible so that it will be under my control on what hours I have.”

In order to achieve this goal, McHenry plans on growing his business to have a team of at least 100 people working under him. He pictures a plethora of possibilities and opportunities for the future of his real estate.

In the long-run McHenry strives to own a gym business and commercialize it. He is using real estate in an effort to buy his own real estate in the future.

“Anyone can be their own entrepreneur and start something with nothing and with hard work and time it will compound into something amazing,” McHenry said. “I don’t want anyone to see me and be jealous or envy me. I want someone to look at me and say if he can do it then I can do it.”

McHenry is such a young and successful realtor that others could learn from. Everyone has their own path to success and this is the one Sean has built for himself.

“Keep your eye on Sean McHenry because he has a very bright future ahead,” Boyette said. “He is no doubt going to be a mover and shaker within this community and he is going to do big things in the world of real estate and investing.”

Ultimately, Sean continues to inspire other MSD students to achieve the unimaginable with his prosperity in cheer, podcast speaking and realty.