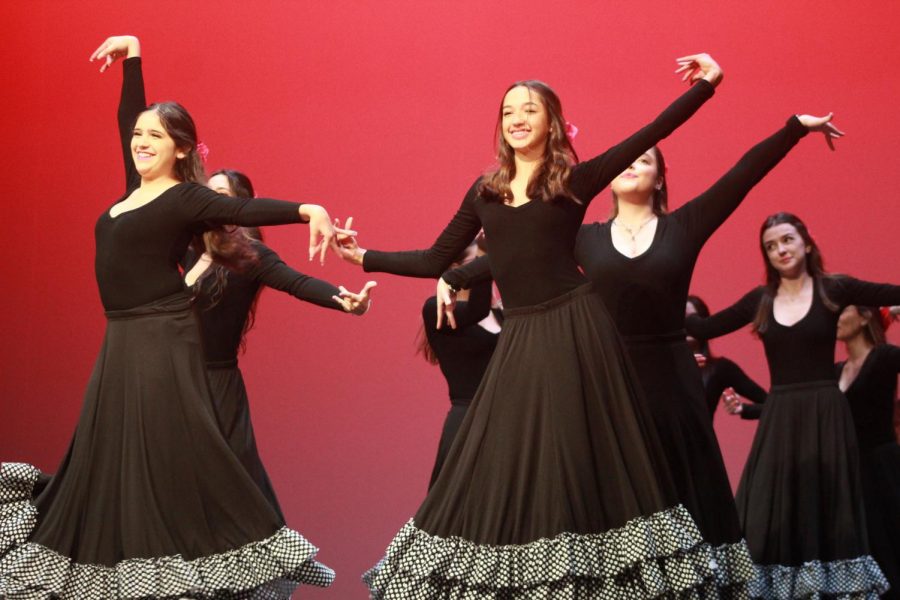 Spain becomes a spectacle for its various traditional dance styles.

Marjory Stoneman Douglas High School held their annual Multicultural Show on Friday Dec. 3. Unlike last year’s multicultural show which took place online, this year’s show was held in person in the auditorium. There were two showings; one during school in fifth and sixth period, and one after school for parents and those who were not able to watch during school hours.

From the stunning choreography to the beautiful lights, all aspects of this show were amazing. During each performance, theater tech students were controlling the stage lighting, which I think enhanced the performances and made them even better.

In between each performance, there was acting from students who played Captain Hook, Wendy, Tinkerbell, Peter Pan and Smee. The characters narrated the performances around the world, going to the different countries where the students’ various cultures were featured on their trip back to neverland.

The show started off with a wonderful performance of “Lost Boy” by Ruth B., which a MSD student sang. Then there were two performances of Bachata from the Dominican Republic, followed by Jamaica who performed dancehall. This performance was really short and did not give much; however, they redeemed themselves with their second performance in the second half of the show.

After Jamaica, we saw Haiti, Peru, Brazil and Columbia. Columbia’s performance was beautiful. They performed cumbia and wore cumbia dresses, which are long traditional dresses that added more effect to the dances. I favored Columbia the most, because of their outfit choice that added to the performance. Brazil performed the music genre, forró, a second time after Columbia. The last dance before intermissions was reggaeton from Puerto Rico.

After the intermission, the LED Dance Club performed. The acrobats at the end were a highlight of this performance. Moreover, the jazz performance had the crowd screaming because of the Beyoncé-inspired song, “Who Runs the World (Girls).”

Next, the Ladies of Destiny Step Team represented Africa, and the crowd went crazy. I personally enjoyed this powerful performance.

India then performed with an intricate Bollywood-themed performance, in which they wore traditional sarees. The aspect of this performance showed the light of Indian culture featuring the difference in dances between female performers and male performers.

Following India, students performed a K-pop dance to represent Korea, which involved brilliant fast-paced movements that kept audience members on their toes. Their outfits reminded me of the street-wear style of Korean youth and the song was an upbeat song from the boy band group “Seventeen.”

Spain performed flamenco, wearing traje de flamenca dresses. This performance was incredible, from the music choice to how elegantly they performed. I also enjoyed watching New York for hip hop. While the song choices were immaculate, the outfits were not all that as they wore basic blue long-sleeved shirts with black shorts. I think that more work should have been put into the outfit choices.

Jamaica had a second performance that was way better than the first and was longer. In my opinion, this performance was so captivating I did not want it to end. I definitely would say that this one was another one of my favorites because the music was very upbeat and improved the performance.

Cuba performed salsa and the Dominican Republic performed merengue. I felt that this dance tied the whole show together, leaving an amazing impression on the audience.

Overall, the 2021 Multicultural Show was amazing. Specifically, I really admired the hard work of each and every student, whether they were speaking, singing or dancing, I could tell they put effort into coordinating the entire show.