[Review] The popular book ‘If Were Villains’ is worth the read 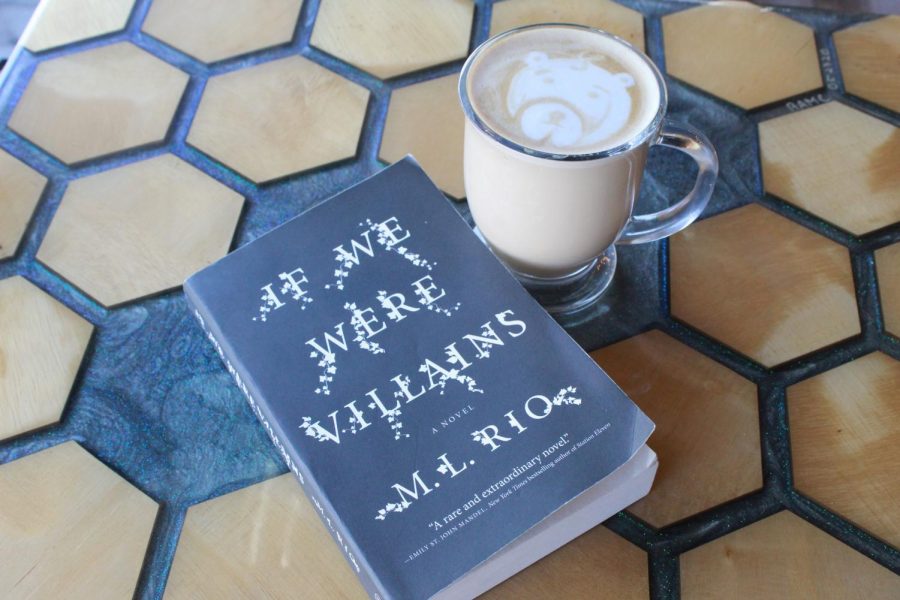 Sip a latte and enjoy If We Were Villains a riveting mystery thriller, written by M.L. Rio.

The popular book, “If We Were Villains” by M.L Rio, published in 2017, is the story of seven actors–Richard, Wren, James, Alexander, Meredith, Filppa and Oliver–competing their way through an elite college. In the four years, they have achieved the goals set for them, that is, until tragedy strikes and only six are left to grieve and cope on their own.

The book is full of Shakespearean references and quotes the famous English playwright often throughout. The plot thickens when the seven are casted for the well-known play “Macbeth.” The characters are used to being casted in the same archetype in every play they act in, so the different casting causes a ripple in the way they move and speak around each other.

The group is presented in stereotypes: hero, tyrant, villain, temptress, ingenue and extra. The characters soon identify and become who they have been casted as. That is until James, the hero, wants to explore his range and the group dynamic is disrupted beyond repair.

The detail and angst written makes you feel as if you are confused and lost, just as James was. The book sucks you in and will spit you out with so many emotions running through your head.

Their deepest insecurity and most powerful strength being exposed causes the shift in their friendship to deepen. Avoiding each other’s gaze and softening the words that come out of their mouths, everything has noticeably changed.

The story is told through Oliver’s eyes and starts with the question of “What really happened that night?” Colborne, the detective that worked the case, is curious and now, being retired, is finally asking the questions he has held onto since the case opened, 10 years prior.

The mystery to the book is that the readers are just as lost as Colborne during the story. You have to guess, fail and be surprised. The emotions and ideas swirling through my mind while reading were constant as I never knew what would happen and how the twists and turns would result in.

The tension between the characters is so captivating, it feels as though the readers are in the middle of the crossfire. I liked how the mystery unraveling was a slowburn. The first conflict was shown on the night of “Macbeth,” after many chapters building up the tension.

After the show, the festivities began and left most people surprised, including me. A fight breaks out in which Richard drowns James, soon being stopped before anyone gets hurt. The hatred for Richard grows inside the characters as well as the readers. The brawl causes a change in the friendships.

All is forgotten until a few weeks later Richard notices Oliver and Meredith together at a party and grows jealous of the two. Richard becomes reckless and belligerent, even banging on the doors. Dragged from his spot, he runs off and disappears for a few hours until Alexander finds him dead in the lake. The skin-crawling sight has him running to the dorm to find his friends. After the night before, each person in the room had an argument or bad experience with Richard and no alibi to support them.

What I found interesting during this part of the book is the character’s true self coming out during the crisis. Some said to leave him, some to help him and some to finish the job. The personas that they had formed during their years in school quickly turned dark. I loved how they all had different reactions just like people in real life. The arguments and hurt you felt along with the characters made me feel connected with the book and the students during that time.

The group forms an alliance and an alibi to ward off the police. After the crime was considered an accident, they feel as if they are in the clear. Day after day, the guilt creeps up until they all are broken and falling apart. The trust, once strengthened, is almost non-existent. They all know it was not an accident, but the one thing missing is the person that committed the crime.

Oliver, cleaning the house, finds suspicious clues inferring the killer is the last person he would have suspected, James. His best friend and the one he saw the night of and the killing, armed with the weapon hidden under his mattress. Oliver sets off to find him. Minutes before the show “King Lear” starts, the confrontation begins.

Anybody who discovers their best friend killed someone would have mixed emotions. There are the obvious feelings of sadness, anger and betrayal; however, the one emotion that stood out for Oliver was understanding. I feel as if his reaction was something any one would feel in his situation. The denial that your best friend would do something this drastic would leave anyone heartbroken, but the only thing I didn’t like was how quickly he was to forgive.

Betrayed by his companion, Oliver leaves his hurt behind to comfort James, not because the information was false, but because James was the only one to understand Oliver. The two were the classic best friend duo and that couldn’t be changed by what they considered a mistake. As the group begins acting, Colborne shows up and starts interviewing Meredith. The curtain falls, and questions begin. The actors are wide-eyed when Oliver admits to the crime he has not committed.

This scene was good for many reasons. One of them being the shock everyone would feel, knowing it wasnt Oliver that killed Richard. The best part about this is the writing. The inclusion of Shakespeare was clever, knowing that most of his works are tragedies. It makes you feel for them and what they have all gone through.

The story is completed when Oliver ends the conversation with Colborne, and Filippa arrives to bring Oliver home. He waits at the door, nervous for the reaction he has to face. As the door opens, Meredith’s face falls and picks back up again as she realizes what has happened. The relationship between the two resumes where it is left off, but Oliver realizes something is missing: James. The heartbroken truth at the end of the book is the death of James. The cause of death was drowning, the same way Richard drowned him early on and the same way James killed Richard 10 years prior.

This was the one thing I really didn’t like in the book. Throughout their relationship, Oliver was holding back due to his love for James. He could never fully give himself to Meredith, so it doesn’t make sense as to why she was the first person he went home to. Even after James’ death, Oliver would still be holding back. I think the reason this was added was because people would be able to relate to his situation of loving someone you can’t have and going for the second best option.

“Exeunt omnes” is defined as the queue for all actors to leave the stage. This is also the direction the members of the friend group all took too seriously.

Overall, this book was heartbreakingly beautiful. It is filled with secrets and hidden messages that sometimes will sneak upon you, just like it did to me. The flawed, but captivating characters make them come to life. The intensity of each sentence written created an environment open to interpretation. Shakespeare’s words are poetic and their meaning will never be set in stone.