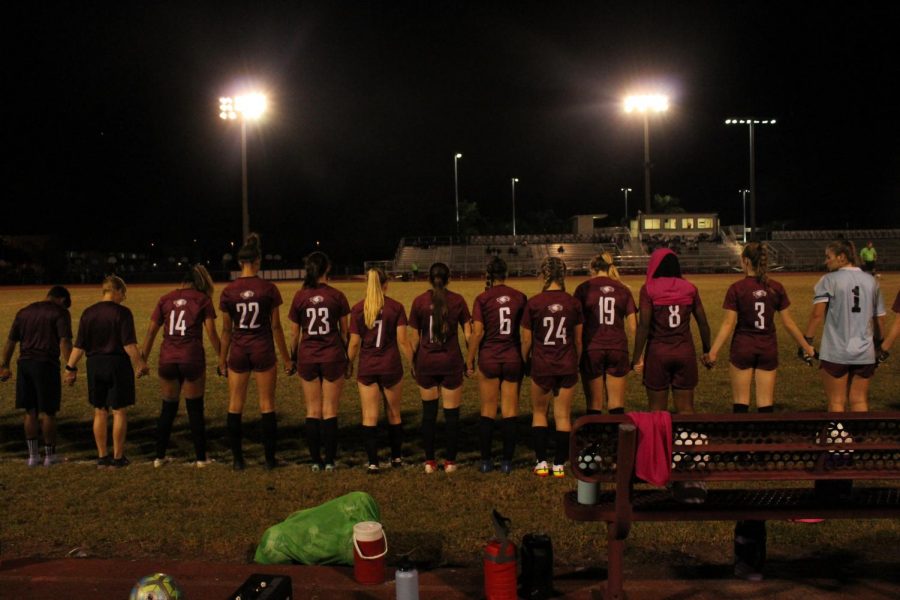 The Marjory Stoneman Douglas women's varsity soccer team gathers in preparation for a match against Cypress Bay. The team won the game and went on to face Pembroke Pines Charter in a competitive match.

On Monday, Nov. 29, Marjory Stoneman Douglas High School women’s varsity soccer team faced off against Pembroke Pines Charter High School at home in their fifth game of the season. They took the field at 7 p.m.

There were many fans in the stands cheering for both MSD and Pines Charter. Coming off of a big win over Cypress Bay, MSD had all the momentum. They knew that this game would be a challenging fight, but they had high expectations for the game. Coming into this game, the Lady Eagles’ record was 4-0, and they appeared unbeatable.

“I knew my team and I could get it done,” forward Gianna Rizzo (9) said.

The first half was very slow-paced as both teams were all-in on defense and were struggling on offense. MSD goalkeeper Ella Stevenston (2) had a tremendous save at the very end of the first half to keep the score 0-0.

“We needed to turn it on in the second half and start putting everything we can into offense,” goalkeeper Ella Stevens (2) said.

To start the second half, both teams returned to the field with amazing defense.

In the final 10 minutes of the game, the MSD players knew the other team was playing well. If they could not score, the game would end up as a tie or with the Eagles losing. Although forward Rizzo’s offense had led the team to many victories throughout the season, that of which she was confident could be accomplished before this game, she wasn’t able to put up the performance she usually does.

“It was a tough game but we have to let it go and prepare for the next,” forward Addy Krajczewski (25).

In the end, it was evident that defense played a large role as the game ended with a score of 0-0. The team was not happy with their performance and knew they needed to get back on track. MSD’s next game will be against Western High School on Tuesday, Dec. 27. Their current record is 4-0-1.