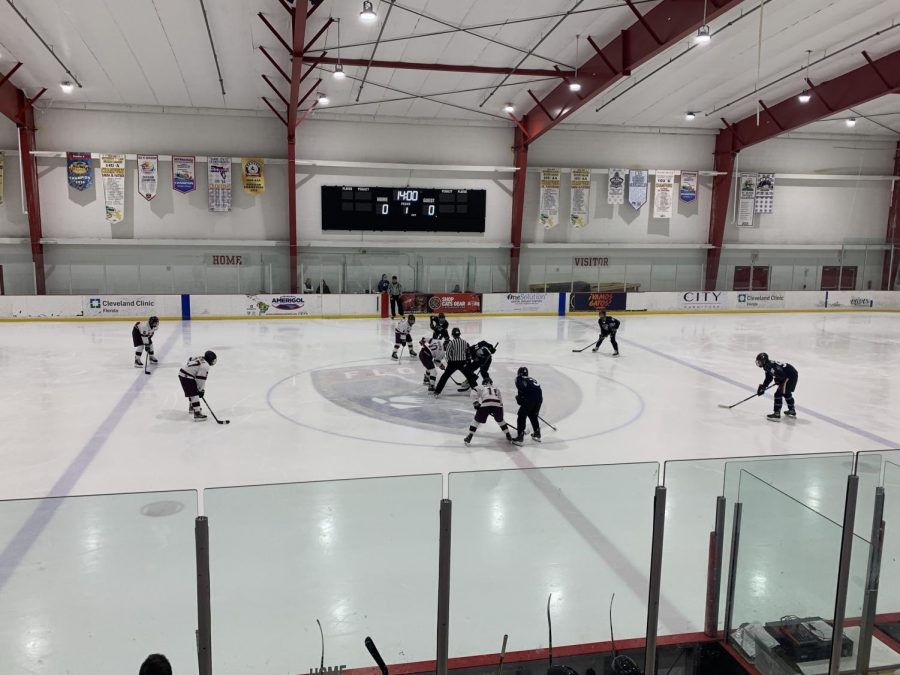 The Marjory Stoneman Douglas ice hockey team squares up for a faceoff at the start of the match.

The Eagles started out the game strong with a quick score right after the opening puck drop. MSD controlled possession for most of the first period, only allowing the Mavericks to score once in the first.

“We had a lot of team effort. [There were] a few individuals who really stand out,” defensive player Braden Kravitz (19) said.

After taking a 2-1 lead at the end of period one, period two began slowly but surely. Every time Archbishop gained possession, MSD prevented them from taking any good shots.

MSD was turning defense into offense, taking several shots. They eventually scored a goal with 4:45 left in the second period and added another goal just a couple of minutes later.

The team played with a great balance of defense and offense, but in the first two periods their defense stood out as they took the puck away from Archbishop almost every time they got on offense.

The third period commenced when the Eagles maintained a less aggressive defense and more patient offense as they tried to prolong the possessions. After a couple minutes of back-and-forth turnovers, the Eagles once again scored to push the lead to 5-1.

Though Archbishop started keeping their possessions longer and trying to take advantage of the Eagles’ defense, even when Archbishop changed up their offense, they still proved no match to the eagles great defense.

Once again, the Eagles maintained some momentum and played a very composed offense in response to the very aggressive defense of Archbishop, who were trying to slow down the game and let the time run out.

In the final two minutes of the game, a final goal ended the game with a strong 6-1 victory for the Eagles. Despite many players, such as Kravitz, who believe that the team could have won by a larger margin, they look forward to carrying their momentum into the rest of the season.