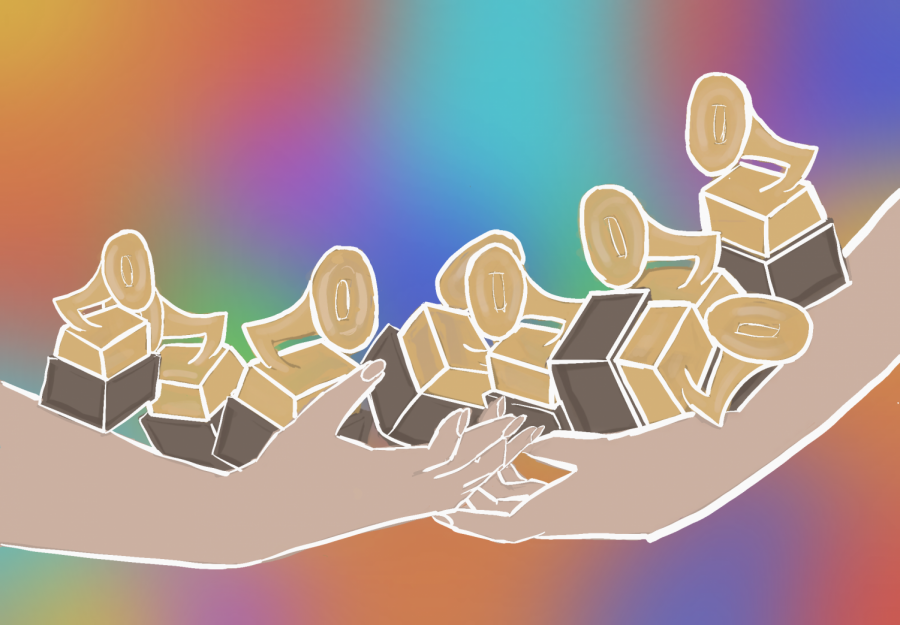 For any hard-working music artist, winning a Grammy award is a momentous accomplishment. Many artists have a natural talent for music and put a great deal of time, dedication and passion into their work.

The more recent Grammy award shows have listed some unusual nominees and winners that people do not believe are deserving of the titles given. The 2021 Grammy Awards sparked controversy with their absurd winners and snubs.

This includes but is not limited to BTS, one of the biggest K-Pop bands in the world, not winning in any of their nominated categories; and the same goes for rising artist Phoebe Bridgers. This makes audiences, along with myself, question whether or not the Grammys are legitimate.

The Grammys, a popular award show presented by The Recording Academy, has been airing on television for 64 consecutive years. The show recognizes achievements in the recording industry. However, the academy’s board members who nominate artists and songs for consideration do not play a fair game. They vote for artists who are popular and endorse the academy, not for artists who are well-deserving of a Grammy.

The so-called “expertise” that these voters possess is only being put to use in less than half of the categories presented in the show and leaves the others in the dark.

An issue that has been presented to the general public is the lack of diversity within the voting committee. The academy has spoken out about increasing diversity within the committee and did so when they included 900 new, diverse voters. It took them until 2018 to do this, a disappointing amount of time to give all music artists a fair chance at winning a piece of metal with their name engraved in it.

In recent years, the nominees and winners of the Grammys have been particularly questionable. There were multiple nominations for Justin Beiber and none for The Weeknd, who should have led the nominations and wins in the pop and rap categories. Accomplished artists have not been receiving acknowledgement for their work.

At the 2021 Grammys, The Weeknd, a Canadian singer, songwriter and record producer, was not nominated for a single award. His most-streamed single “Blinding Lights” spent a record-shattering ninety weeks on the Billboard Top 100. Aside from that, his album After Hours was one of the biggest albums of 2021. You couldn’t listen to the radio without hearing one of his songs playing in the span of an hour.

For him not to be nominated for a single award is ridiculous. Not only were his songs widely popular, but they were also creatively genius with amazing lyrics, top tier production and a thrilling storyline told in music videos, making the album an audio and visual experience. The Recording Academy only ruined their reputation further by not recognizing The Weeknd’s astonishing talent and further proved the point that the award show is a scam.

A pattern that has been noticed by viewers throughout the past couple of years is that the winners of the golden gramophones happen to have more popularity than the other nominees. A chart-topping song or artist could win over the votes of the Grammy committee but that does not mean it is more deserving of the award over other nominees.

At the 2021 Grammy Awards, the song “Yummy” by Justin Beiber was nominated for Best Pop Solo Performance. The news of this really pushes me to think that the award show has become a joke or a gimmick to get attention.

Bieber, who is an extremely popular music artist and heartthrob to teenage girls since 2010, released the horrendous song in 2020. The song went viral for obvious reasons, being that it was lyrically weak and strange.

Beiber’s popularity and the internet’s reaction to the song is the only reason why it was nominated. His name just had to take up a space on the TV screen, when it could have been another artist with a better song, objectively and subjectively.

Obviously, there are some artists and songs rewarded that are respectable and commendable. Taylor Swift winning Album of the Year for her eighth studio album folklore was well-earned and easily justifiable, along with Dua Lipa’s record-breaking album Future Nostalgia that took home the Grammy for Best Pop Vocal Album. However, we cannot overlook the mistakes the Grammys tend to continuously make.

Overall, the Grammy Awards are distasteful and unfair. The show has become a popularity contest, which seems to be more important than the quality of the music. Those who are deemed worthy of the prestigious award tend to be the audience’s last pick, with the exception of some distinct standouts in the nominated categories. It may be an entertaining show with some exciting staged performances, but the academy should not be excused for their biased award ceremonies.