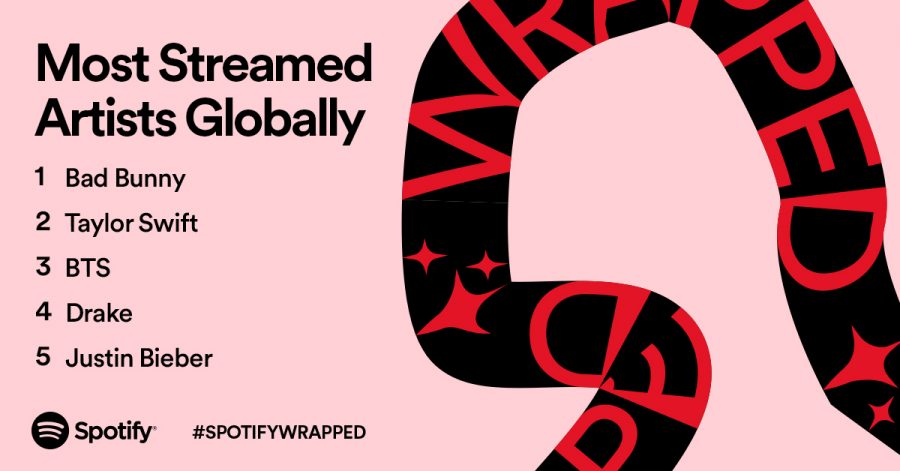 On Dec. 1, Spotify released Spotify Wrapped for users to see their individual tastes of the year and most-streamed music globally this year.

On Wednesday, Dec. 1, Spotify, a popular music streaming service, released their 2021 Spotify Wrapped feature for its users. Spotify Wrapped was launched in 2017 by the platform to show users their listening habits for the year. Spotify users can see a compilation of data for their music routines, displaying everything from top artists, songs, genres, podcasts, music aura and minutes spent listening on Spotify.

Spotify Wrapped uses your listening data from January 1, the beginning of the year, to October 31 of the same year.

Users can access their Spotify Wrapped from the 2021 Wrapped hub exclusively in the Spotify mobile app. When accessed, Spotify Wrapped shows users a series of slides while their favorite songs from the year play in the background. Spotify Premium is not required to access Spotify Wrapped, but someone needs to have listened to at least 30 tracks on Spotify over the year.

“I really liked [the new Spotify features], I think they should keep them in because who doesn’t like to think they are the main character in their movie,” Anaya said.

“2021: The Movie” turns your top songs into the soundtrack of your movie, while “Your Audio Aura” shows what aura your music gives off. “2021: The Movie” shows which songs would be playing in different scenes in the movie. Some included “The opening credits,” “The song playing as you proclaim your love in the rain,” “The song playing as you face-off against your rival dance crew” and “the song playing as a single tear drops into your reflection in the pond.” “Your Audio Aura” tells users what aura their music gives off, including “wistful,” “hopeless romantic,” “yearning,” “chill” and “kindness.”

“Playing Cards” is a “two truths and a lie” quiz game that allows the user to guess their listening habits. Spotify will give you three-generated statements about your listening habits, such as “The top song you listened to was ‘drivers license’ by Olivia Rodrigo,” and users are able to select which statement is the lie.

“2021 Wrapped Blend” lets users see how their music taste matches up with their friends’ and build a “Wrapped Blend” playlists that combines friends’ tastes. If you have people “friended” on Spotify, a joint playlist is created. In addition, a separate series of slides is created that shows their musical taste match score, the top shared album you both listened to and an artist you and your friend both listened to a significant amount this year.

“Your Audio Aura” gives users moods based on their music and pairs it with colors. Purple is for passionate music listeners who tune in to get amped up, while green is for calm, analytical and introspective Spotify users that gravitate towards complex music. Pink is for the hopeless romantics and oranges are rebellious and bold users who listen to high-energy songs. Yellow is for people who like their music to help with focus, motivation and self-improvement. In contrast, blue is for wistful or emotional people who listen to music to put their feelings out loud.

“I don’t know how I feel about the aura, I got wistful and kindness and I don’t know if that accurately describes my music,” Anaya said.

TikTok Wrapped cards were also introduced this year, meaning users can share their Wrapped cards on Snapchat, Twitter, Instagram, Facebook and TikTok. The cards let users show off their accomplishments and listening habits throughout 2021.

“I am super proud of being in the top 0.05% of listeners for Ariana Grande, so I posted it on social media,” freshman Dylan Greenstein said.

Despite the praise for Spotify Wrapped, several MSD students struggled to access Wrapped and there are still features users would like to see.

“I liked the animations that came along with each ‘slide,’ but I thought it was strange that ‘2021’ was all that was in the background. I would like to see more symbols from the year represented,” Anaya said. “I think it would also be nice if they have a list of artist recommendations at the end that correlate to the same genre, sound, etc.”

In addition to personalized Wrapped for each user, Spotify uses the data to show top artists, songs, albums and podcasts worldwide.

“I mostly agree,” freshman Isabel Lopez said. “I disagree with the first ranking [for artist of the year], I don’t really think Bad Bunny was as popular as some other big artists this year.”

In addition to top music and podcasts, Spotify tracks trends of 2021.

Spotify’s Music for Plants playlist has grown 1,400 percent during the pandemic, with popular songs on these playlists including “Ivy” by Frank Ocean, “Such Great Heights” by Iron & Wine, “Garden (Say It Like Dat)” by SZA and “Here Comes the Sun-Remastered 2009” by The Beatles.

There have been over 42 million streams of vaccine-related playlists this year. Songs on these playlists frequently include “Hit Me With Your Best Shot” by Pat Benatar, “The Cure” by Lady Gaga, “Jolene” by Dolly Parton, “Save Your Tears” by The Weeknd and “I Wanna Dance with Somebody (Who Loves Me)” by Whitney Houston.

With all the sharing of Wrapped cards on social media, it’s only natural that Apple Music users feel left out, which is why Apple Music launched Apple Music Replay, launched in 2019. Replay works year-round, unlike Spotify Wrapped and is updated weekly.

While not an equivalent, Apple Music Replay tells users how many hours they’ve listened to music this year, their top 100 most streamed songs this year and how many plays for each, how many different artists someone has listened to, their top 20 most streamed artists and how many hours they’ve spent listening to them, how many albums someone has listened to this year and their top 10 albums and how many plays for each. Users can add their 2021 Replay to their library, as well as past years’ Replay playlists. However, Replay is not as in-depth as Spotify Wrapped and does not have graphics that are easily shareable on social media.
“I like Spotify Wrapped [more than Apple Music] because it is more detailed,” freshman Isabella Renert said.

Youtube Music offers Music Year in Review and offers a playlist of someone’s most-streamed songs. It appears on the homescreen of the app, titled “My 2021 Year in Review.” The feature was rolled out in November. Tidal also offers an alternative to Spotify Wrapped, called My 2021 Rewind. It highlights someone’s top-streamed songs and artists of the year with a playlist and shareable graphic for social media. My 2021 Rewind has not yet been released, but Rewind for 2020 was released on Dec. 1, so it is expected to be released soon.

2021 Wrapped is finally out, but Spotify Wrapped data for 2022 begins Saturday, Jan. 1, meaning users can start exploring new artists and listening to old favorites in preparation.