[Opinion] Fast fashion continues to cause harm to consumers, children workers and the planet 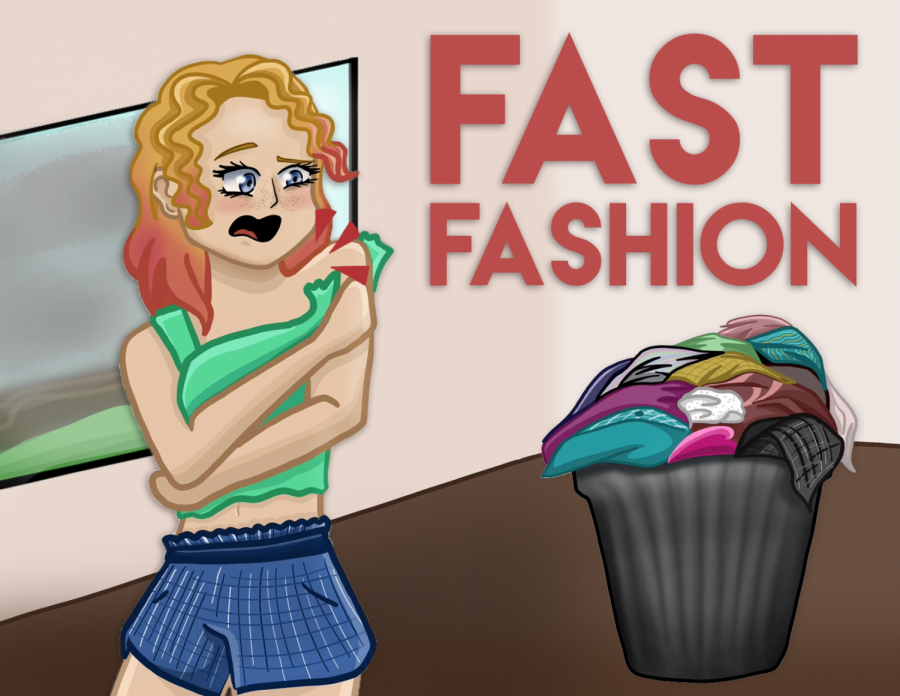 Fast fashion has several implications for the environment, child labor and the economy.

In preparation for her summer vacation, a girl orders several new pieces for her clothing collection: bathing suits, denim and jewelry galore. She runs in excitement to the door when her packages arrive. While trying on her new outfits, she finds that although some threads may be loose and the fabric may be see-through, she is happy with her purchase, considering the low price of her items.

However, upon her return home from vacation, she finds these clothes have easily been worn down after only one or two wears; the threads are loose and the straps are falling off. Considering she paid so little for them in the first place, she simply throws them out and logs into her Shein account, a popular fast fashion clothing site, to make another purchase.

This recurring cycle of buying clothing cheap, throwing them out and repurchasing new items in fast fashion today has become a serious issue for not only the purchaser, but also for the environment around them. Fast fashion is defined by the speedy, mass-production of imitation high fashion clothing, made at a lesser cost due to the cheaper materials and labor force.

Shein, Romwe, Zaful, Forever 21, H&M and Charlotte Russe are only a few of the atrocious avenues that contribute to the fast fashion fiasco. These outlets, whether online, in-store or both not only exploit buyers by luring them in with low prices to disguise the substandard quality of their items, but also the unethical production and labor that occurs to create them.

While higher quality brands such as American Eagle or Torrid use materials such as lace, cotton, silk or wool, fast fashion brands such as Romwe or Zaful use synthetic, man-made, polyester-based fabrics which are known to release chemicals that can cause hormone disruption and even health implications for those with sensitive skin.

This pathetic propaganda of misleading advertisements leads to a mistrust of buyer-seller ethics and often deceives customers when their product is not how it appeared when purchasing.

An additional overwhelming issue that often seems to lurk in the background of the fast fashion ordeal is the hefty detriment and unsustainability it creates for the environment and health of our planet.

As fast fashion clothing is often made of non-biodegradable materials, the overwhelming amount of disposed items leads to an excess of landfills full of non-environmentally friendly waste. In 2021, according to ​​The World Resources Institute, fast fashion contributed to approximately 1.2 billion tons of carbon dioxide release, a potent greenhouse gas that leads to global warming.

In places such as the Chilean Atacama Desert, also known as the place where fast fashion goes to die, cheap clothing items that do not sell in the United States or Latin America often end up in monstrous mountain piles of unwanted items. Several of these piles have been burned in order to make more space for more clothing item piles that this planet simply does not have room for.

This act of burning excess clothing not only impacts the world’s fashion industry by wasting clothing, but also causes an increase in the amount of carbon emissions that are released into the atmosphere. These toxins pollute our air quality, elevate sea levels and harm animal habitats.

As if it could get any worse, multiple fast fashion brands, such as H&M and Forever 21, produce their clothing through unethical avenues and promote child labor to develop their clothing. While this tactic is often hidden or worked around to be made “legal,” it is a prevalent source of labor for fast fashion mass production in countries such as India, Uzbekistan, China, Bangladesh and Egypt. The items produced are later sent to places, such as the United States, for resale.

Of these brands, H&M in particular has been caught in numerous scandals involving hiring young workers and violating child labor laws. The company has worked tirelessly to cover up not only their unsustainability, but also their use of unethical production by labeling their clothes as sustainable with a green tag, clearly in hopes of fooling buyers into purchasing their items. Even when this is known to buyers, the low prices are still hard to beat, despite the negative impact on our planet. Clearly, fast fashion has a way of disappointing and harming consumers, in more ways than one.

The online fast fashion engine Shein is also no saint when it comes to seller ethics. In 2021, Shein denied violating child labor laws; however, they have not made public disclosures about working conditions within their supply chains and factories, which is a violation of required disclosure among online companies in the United Kingdom due to the Modern Slavery Act of 2015. Not only does fast fashion mislead buyers and lack transparency, but it also promotes and exploits the use of child labor or sketchy production.

While it is understandable that buyers enjoy fast fashion because of low costs, buyers must ask themselves, what bargain is worth justifying destroying our planet? There are several alternatives, such as purchasing second-hand/used clothing in thrift stores, to prevent the fast fashion industry from wreaking havoc upon us and adding to our environmental crisis.

Online thrift store brands such as Depop, Thrift-up, Poshmark and the RealReal allow consumers to shop second-hand and therefore sustainably, while being at home. This method further helps the economy and reduces waste. These stores have been showing major success, and have even been transformed into physical stores. The RealReal is an example of a luxury second-hand store that has made a physical appearance in New York and Florida.

Other thrift stores can be found locally such as Goodwill, Salvation Army, American Thrift, Plato’s Closet and Thrift Sense. These stores allow consumers to shop a broad collection of clothes, furniture and decor at a lower price. Thrift stores such as Plato’s Closet also give locals the opportunity to donate their clothes to earn money back. Additionally, these stores provide stable jobs and income, with some offering free healthcare. This is significantly better than the wages and conditions of the jobs fast-fashion companies provide.

Although it is probably the least preferred method, simply shopping for more expensive, high quality and eco-friendly clothing brands that uses the extra profits towards helping the environment, is another solution to minimize fast fashion consumerism.

Clearly, fast fashion avenues are in no way beneficial to the environment or buyer-consumer ethics. If people don’t start to change their shopping habits to be sustainable and world-friendly, we will have more issues than just a few thrown out items. Next time you are looking to make a cheap fashion purchase, take a second to ponder its detriment on our planet and think: What is fast fashion worth to you?