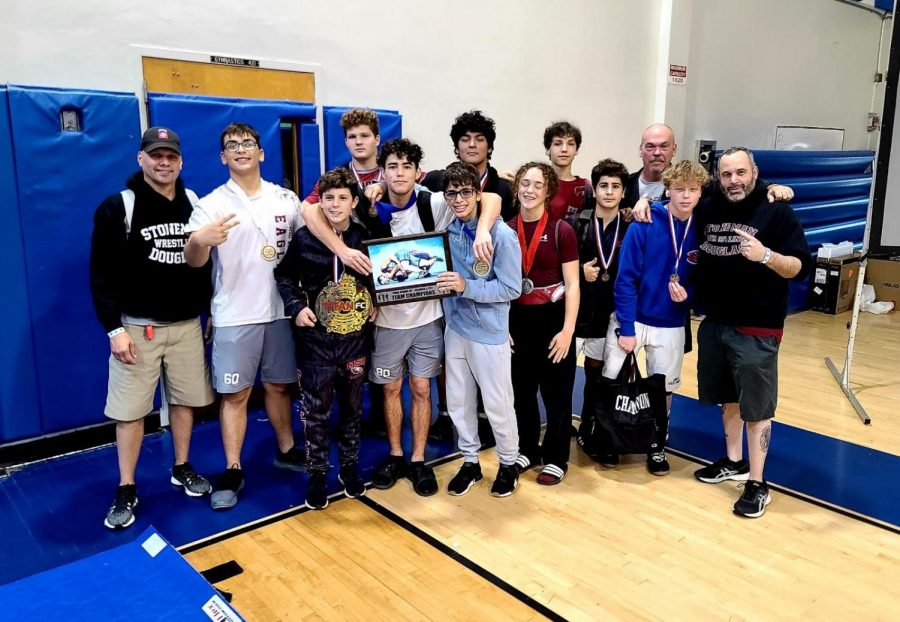 The MSD wrestling team poses with their first place award they received at their first tournament of the 2021-2022 season. Three of the team's wrestlers contributed towards the victory by winning their respective brackets. Photo courtesy of MSD Wrestling

On Saturday, Dec. 4, the Marjory Stoneman Douglas High School wrestling team made their way to Coral Springs High School for their first tournament of the 2021-2022 school year. The tournament consisted of 13 high school teams, including the St. Thomas Aquinas High School Raiders and the Nova High School Titans, who were arguably the toughest competition for the Eagles.

Knowing that the tournament was just the beginning of a long and hopeful season, the Eagles made sure to sufficiently prepare for the competition. Preparing for a successful outcome in the tournament was a great feat for the Eagles because many of the wrestlers balanced their dedication to wrestling with other sports, extracurricular activities and academics.

“A lot of drilling, wrestling and conditioning. Some of the wrestlers had just returned from football, so several of them did not have much time to prepare. They really stepped up in this tournament,” coach Ken Gendason said.

With the tournament being the team’s first of the school year, many of the Eagles’ wrestlers went into the match with individual goals that they looked to accomplish. Most notably of which were Gaby Caro and Loenzo Zangari, who were heading into their first varsity wrestling tournament.

The tournament was formatted into several double-elimination brackets sectioned by weight class, with the final six wrestlers in each bracket competing in a single-elimination match. Due to the skill and competitiveness of the Eagles’ roster, 13 of the 15 wrestlers that were entered into the tournament placed in the top six of their brackets.

As the tournament commenced, the Eagles were dominant around the board as many wrestlers were able to win by large spreads. This included numerous pins in which they were able to hold their opponent for a long enough period of time to be awarded with a victory.

With 13 wrestlers qualifying for the single-elimination round, the Eagles were set up to claim a win throughout the tournament’s entirety, and the team saw no slowing down.

Unfortunately, wrestlers Lorenzo Pelligrini, Caleb Hebert and Jackson Zajkowski’s competitive performance stopped at the start of the playoff round, ultimately placing sixth in their brackets. Additionally, despite their hard effort, Rocco Duluguy, Vincent Dion and Tyler Lowe were also cut after placing fifth in their bracket.

Nonetheless, the successful run for these wrestlers allowed for greater momentum and motivation for the rest of the team because their unity and chemistry pushed them towards their victory.

“We gelled as a team,” Gendason said. “We had a wrestler. Rocco Duluguy, who only weighs 97 pounds, fills in at 113 pounds. He was a little nervous, and when he stepped on the mat to compete his teammates started chanting, ‘Let’s go Rocco, let’s go!’ several times. Rocco went out there and pinned his bigger opponent from Nova, which ignited the team. Rocco went on to place fifth, giving up 10-15 pounds to his opponents. [The team] was behind each other the entire day.”

In the final four of their brackets, Xander Kooby and Diego Enciso showed off their skills in exciting matches. The pair went on to place third and fourth in their brackets, respectively.

As the tournament reached its final round, the Eagles had five wrestlers competing for first place in their brackets, leaving a good chance that the team would go on to win as a whole.

One of these finalists was Caro, who had made the final round of her first varsity wrestling tournament, doing so as a woman in the men’s bracket. Although she would place as the runner-up, Caro demonstrated her vast skill set and potential for the season moving forward.

“I thought I did pretty good, as I placed second in the boy’s varsity division,” Caro said. “I won by two pins and lost by points in my last match. I had opportunities to pin the last boy that I missed, so I’m going to go back to the drawing board and fix it so I can pin him next time.”

Additionally, Lucca Azzarelli placed second in his bracket after showing outstanding effort and skill in the tournament.

After the tournament concluded, the Eagles erupted in celebration as three of their wrestlers had won their respective brackets: Charles Dion, Lenny Cipolla and David Leiva.

Dion’s performance was arguably the most dominant of the tournament as a whole, pinning all three of his opponents during his matches.

In addition, Leiva had a commanding tournament as he went on to achieve two pins and win by a score of 7-1.

The last student to win their bracket, Cipolla, competed in one of the tournament’s most exciting matches to claim the victory. Cipolla had two pins heading into his final match, and dominated in every point of it. However, his finals match was much more of a nail-biter as he edged himself over his opponent to obtain his final and match-winning point by a score of 13-12.

When the total scores of each team were tallied up, the Eagles were proven victorious by a long shot, ultimately winning by over 20 points.

“We did our best with our aggression. We were pushing the pace and were on top of our game the whole time,” Caro said. “Everyone gave their all and stood their ground throughout the entire tournament.”

All in all, the Eagles’ dominance from each and every player allowed for the team to be named as the tournament’s champions, bringing their season to an exceptional start.

“It was only the first tournament of the season, and it’s a long grueling season. I am hoping the team will take this accomplishment and keep building as we have the opportunity to win two district team titles this season,” Gendason said.

The team will continue to prepare and practice for their upcoming tournament at Mater Lakes Academy on Saturday, Dec. 11.