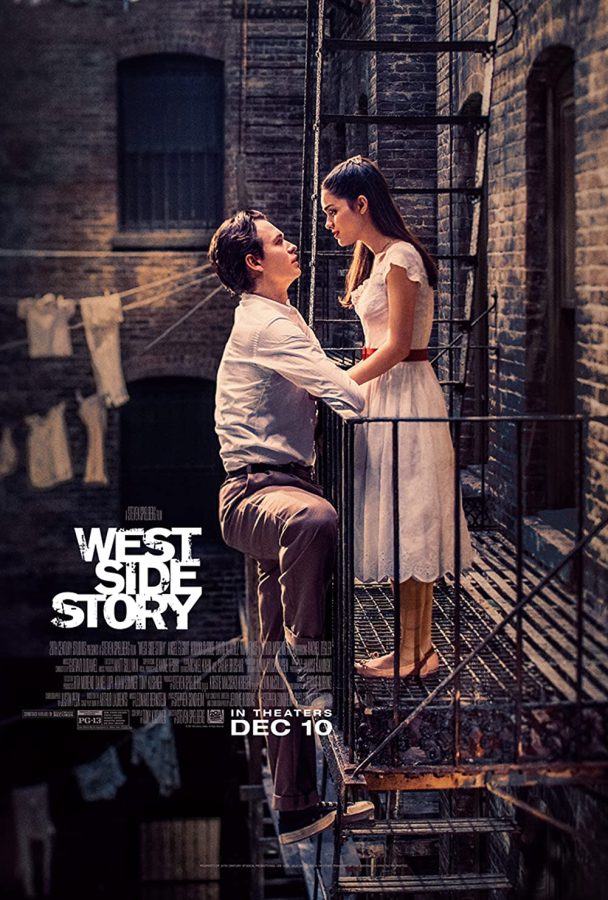 West Side Story is able to be watched on the streaming service HBO Max.

Premiering on Friday, Dec. 10, the remake of the 1961 “West Side Story,” presents a captivating story retold for years. The story is set in the 1960s and features main characters Maria Nunez and Tony Wyzek falling in love, although from two different ethnicities. The setting is based on how life for Puerto Ricans and Whites was very violent, harsh, and how almost all action was racially motivated in the west side of New York City.

Actors featured in this movie are Ansel Elgort as Tony, Rachel Zegler as Maria, Ariana DeBose as Anita, Mike Faist as Riff, Rita Moreno as Valentina and David Alvarez as Bernardo.

These actors did a wonderful job at playing all of these famous and iconic characters. This time around, they gave characters like Riff, the Jets gang leader, and Bernardo, the Sharks gang leader, more of a background. In the 1961 version, these characters did not have any past behind them and were only side characters to Maria and Tony.

The gist of this story features a pair in love with all odds possible against them. They meet at a dance, and Tony, being a founder of the Jets, and Maria, being the sister to Bernardo, had to hide their relationship and find secret times to meet.

Tony and Maria are “star crossed lovers” who follow Shakespeare’s Romeo and Juliet. The story was based upon this original Shakespeare piece and changed to fit the 1960s era and help viewers relate to what was truly going on during that time.

The acting in this movie was phenomenal but it does not even compare to how great the musical aspects were in each scene. The actors had amazing voices for the iconic songs featured and were able to dance incredibly.

The directors and writers did a great job to preserve the original movie, however they did change a lot of scenes, like the scene for the song ‘America’, and this definitely did not make it worse.

This movie was Rachel Zegler’s debut and I would say she did an amazing job of portraying Maria. She was emotional, strong, confident and had an amazing singing voice that matched perfectly to Elgort’s.

Actress Rita Morena, previously playing Anita in the original 1961 version, came back to television playing Valentina, and she did an amazing job.

Overall, this remake was one of the very few in the past to be done correctly. Enough was changed for it to be better, but not too much to the point where it completely changed the movie. For example, the scene where the song ‘Cool’ was featured, the directors changed it to Tony singing instead of Ice in the original.

Whenever you have the chance this is a great movie to see exclusively in theaters with friends and family, and it gives such a strong message that someday all can be treated equally.