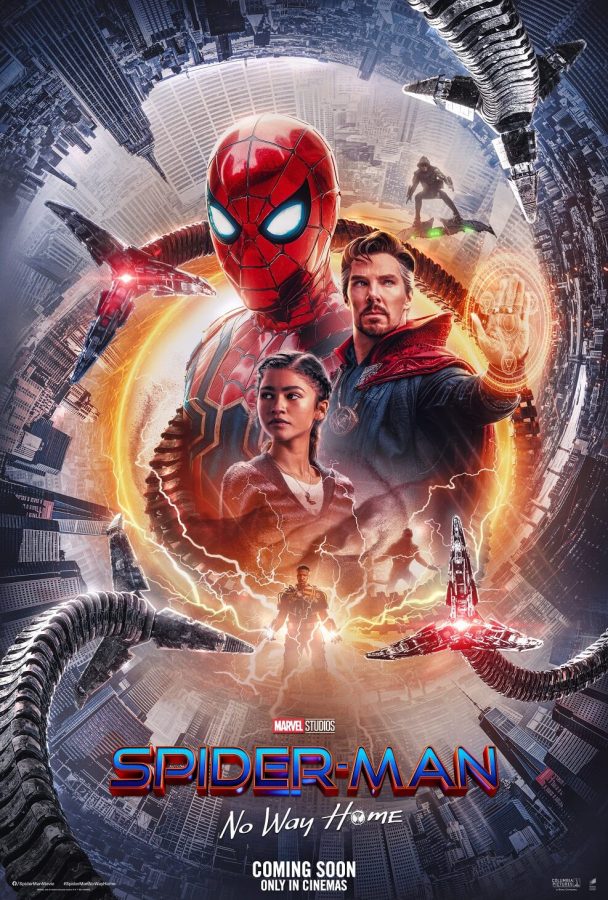 After the drastic cliffhanger caused by the exposure of Peter Parker’s identity in “Spider-Man: Far From Home,” fans have been eager to see what comes next. Following months of anticipation, leaks and rumors, the long-awaited “Spider-Man: No Way Home” came out in theaters nationwide on Friday, Dec. 17.

With high, anticipation-induced excitement, it was no surprise that this movie shattered box office records. The film itself has already produced over 800 million dollars globally, making it the highest-earning film debut of 2021.

Alongside Peter Parker, played by Tom Holland, is his friend Ned Leeds, played by Jacob Batalon. The two have always been iconic best friends, so I enjoyed seeing their friendship return. Completing the trio is Parker’s girlfriend, MJ, played by Zendaya.

As learned in multiple trailers, the plot of the film revolves around Parker’s desire for the world to forget he is Spider-Man. After having his identity leaked in the previous Spider-Man movie, “Far From Home,” this has seriously affected Peter’s life. This has also taken a toll on those he loves, such as his friends and family.

Parker desperately seeks help from Dr. Strange, played by Benedict Cumberbatch. I enjoyed the interactions between Parker and Strange, since the last time we saw them together was during the events of “Avengers: Endgame.” Willing to help, Strange casts a spell that goes wrong and creates mass chaos, bringing in a variety of villains seen in former Spider-Man movies.

This movie definitely had me at the edge of my seat, and I think they did a phenomenal job bringing back each villain from the former Spider-Man trilogies. The movie also brought in a darker side of Parker, which has never been seen before, portraying his emotions after experiencing the loss of several people throughout his life.

One of the most discussed topics in the movie was whether former Spider-Man actors Andrew Garfield and Tobey Maguire were going to make an appearance. With rumors and leaks spreading like wildfires, fans were even more enthusiastic to watch the movie.

This movie was certainly one of my favorite Marvel Cinematic Universe (MCU) projects of 2021. The overall plot in this movie was incredible with no boring moments. The fight scenes were extremely well done, and were probably my favorite parts. Altogether, this movie certainly had its fair share of laughter, sadness and excitement.

While little has been said about the next Spider-Man movie, producer Amy Pascal did confirm that Tom Holland’s Spider-Man has plans to return to the MCU for future projects.

I look forward to seeing Parker’s next steps in future movies, especially after the ending of “No Way Home.” I am thrilled to see what Sony has planned for Spider-Man, and where his next adventure will lead.